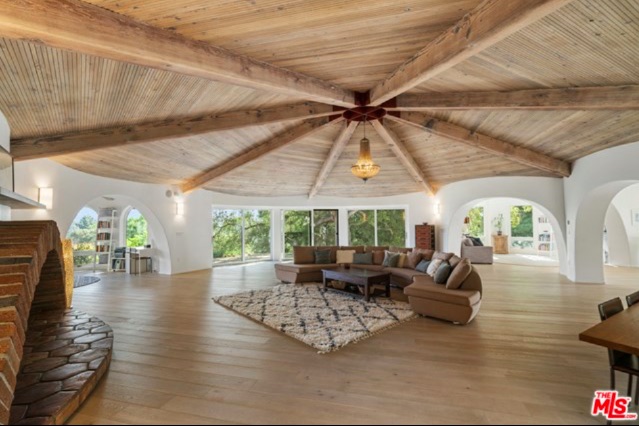 inside the ‘Hendrix house’

Los Angeles is full of surprises and history, especially when you randomly walk in the hills. During one of my errands, I stumbled on strangely shaped houses on Woodrow Wilson Drive, dramatically perched on the hill, and I was immediately intrigued. It turns out they were designed by renowned architect Harry Gesner and built by Norwegian shipbuilders in 1959. Their angular walls and ceilings and wide windows make them artistically integrated with the outdoors and one of them is on sale for $920K if you are interested. It’s small, but it looks like a bargain for Los Angeles.

If you can trust the comment section of certain blogs, Sonny and Cher rented one of them before buying a house, something I was not able to confirm, but the famous couple actually lived for a while in another house on Sycamore Trail, located just a few blocks away. The house has a very similar architecture and may also have been designed by Gesner, or someone inspired by him: ‘High ceilings. Nice flat yard with room for a pool. The former home of Sonny & Cher. Great condo alternative!’ says the listing. The house is not for sale, but the photos on the page will give you a nice idea of Sonny and Cher’s early life in LA.

Woodrow Wilson Drive has always been a magnet for celebrities and musicians – it’s even nicknamed ‘celebrity row’ – and a little further, you can find Frank Zappa’s home with its integrated studio, a piece of music history, located at 7885 Woodrow Wilson Drive. It’s a much larger house, and probably far less accessible, especially because the mansion was bought by Lady Gaga just a few years ago. She probably redecorated everything since, but you can admire nice photos of the interior of the house here.

As for architect Harry Gesner, he is also the designer of this amazing ‘Hendrix house’ on Topanga Canyon, just 26 miles away from Woodrow Wilson Drive. This is the house that Jimi Hendrix was purchasing when he passed in 1970. He loved it because of its circular and organic shapes, and you can only imagine his psychedelic jams inside this vast room pictured above. In 2013, the house was bought by music composer Daniel Licht, best known for scoring the Showtime crime-drama series Dexter, but it was very recently back on the market and may have been bought again.

I had no idea I was walking through Los Angeles history when I went for a walk on Woodrow Wilson Drive. Who said Los Angeles has no history? Walking in the Hollywood hills will just reveal a part of it.