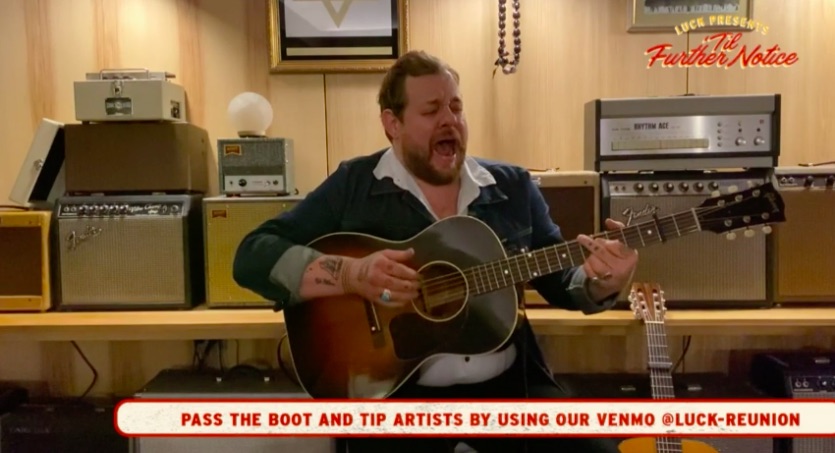 Ten days ago, back when I was watching Code Orange, the sheer strangeness of live streaming was a thrill: empty auditoriums, quiet in the halls except for stage hands, and a brave, scary new world ready to run us over a truck. I never thought it could substitute for being there, but I thought it was at the very least a band aid.

Today: all these fucking pop stars, in their fucking living rooms, with their fucking children.  I can’t take another second of it.

The beginning of the end began very soon, the Willie Nelson fest was unwatchable. Alyson covered it for us but she didn’t cover the Don Giovanni Fest BECAUSE WE COULDN’T FIND THE DAMN THING . What we could find was the always tedious Death Cab For Cuties leader Ben Gibbard doing covers, and rarities, for half an hour of yawn inspiring tedium. Now sure, Death Cab’s middle name is yawn inspiring tedium, and even by those standards it was a major bore. I didn’t get through two songs, couldn’t get through rustic Neil Young, everything I checked out bored the crap out of me.

If live streaming WAS to work, it would need an empty nightclub and a handful of stage hands, both Dropkick Murphys and Code Orange were helped immensely just by having a full sound and a real stage. Everybody else is like that (hysterical) Gal Gadot all star version of “Imagine” which, really, it is just a bit of fun and why on earth the New York Times ripped it to pieces (here) I have no idea. It’s Gal Gadot, man, relax yourself.

Meanwhile… I am done with live streaming, Alyson you’ll have to suffer fr both of us…