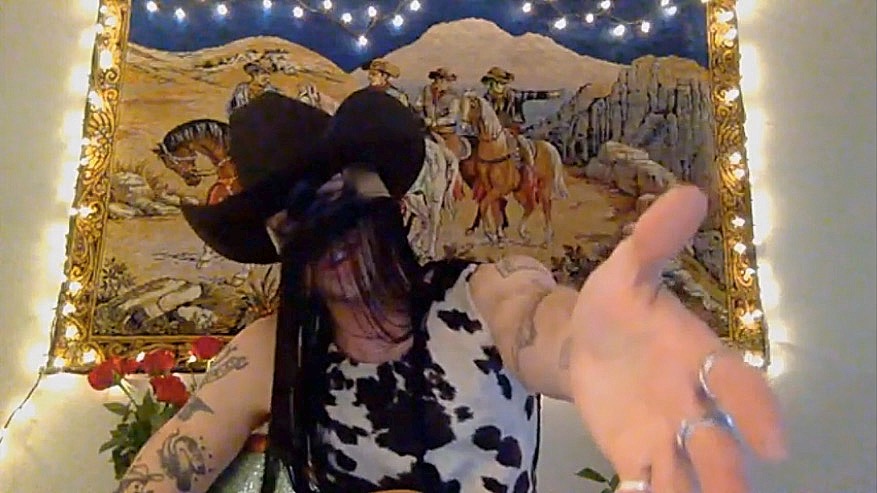 I really don’t think live streams are fair substitutes for concerts, but they are all we have right now, and they keep us together for some time. Orville Peck did one tonight (on Youtube, Instagram) to celebrate the one-year anniversary of his album ‘Pony’, bringing to the mass the ‘best live quarantunes of the year’, and if he surely sounded great and was in a great mood, the performance only reminded me how much I miss the real thing. These live streams are the only thing that keeps us connected, but since everyone is doing it alone, isolated in a living room, the casual performances are obviously always very stripped down and in the end very lonely.

That said, Orville Peck’s deep baritone and his upbeat personality were a ray of sunshine in my current boring existence (and everyone else’s I presume). He played a sparkling blue-green guitar, wearing a cowboy black hat, his legendary fringed mask and a cow-print tank, while he was surrounded by red roses and a flea market cowboy rug.

Because he probably did not want to feel too lonely, he chatted with a few special guests and friends during the performance, casually calling Drag Queen Thanks Jem who inspired him the song ‘Queen of the Rodeo’, his stage musician Bria Salmena, comedian Margaret Cho and American Chief Brad Leone. Of course, these special appearances were only video calls, so it was just the shadow of what could have happened.

He was often having a good laugh during his stripped-down-to-a-few-guitar-chords show, and he sang some of my favorite songs off ‘Pony,’ starting with ‘Turn to Hate,’ while his super deep warm voice was shining more than ever. ‘I am the least technological person, so it’s a miracle it’s happening,’ he told us while he thought this was very similar to what he was doing when he was a kid: ‘I used to perform in my living room in front of my parents.’
There was the appropriate Kenny Rodgers/ Dolly Parton cover, ‘Islands in the Stream.’ one of his all-time favs, – however it’s a bit sad to do a duo by yourself – and more of ‘Pony’, like ‘Roses are Falling’ (Orville was obviously not alone since roses were really falling over him), ‘Hope to Die,’ ‘Take You Back,’ and ‘Dead of the Night’, the first song he ever wrote for the album

Orville’s adorable personality and great laugh were certainly radiating through the entire thing, just like his fun and joyful whistle, and if he hadn’t said a few words about these chaotic times of panic and fear, we could have thought that everything was back to normal.

He didn’t miss a costume change for the last song, a new one called ‘Summertime’ a melancholic ballad he played in a resplendent shiny silver Dior costume. Yeehaw indeed.

I am sure that streams like this one warm up the heart of many fans, who are currently struggling with this long quarantine. Orville is right, art will help us to go through this, and when everything is over, I hope we remember how connected we feel in these terrible times.

You can re-watch the performance below