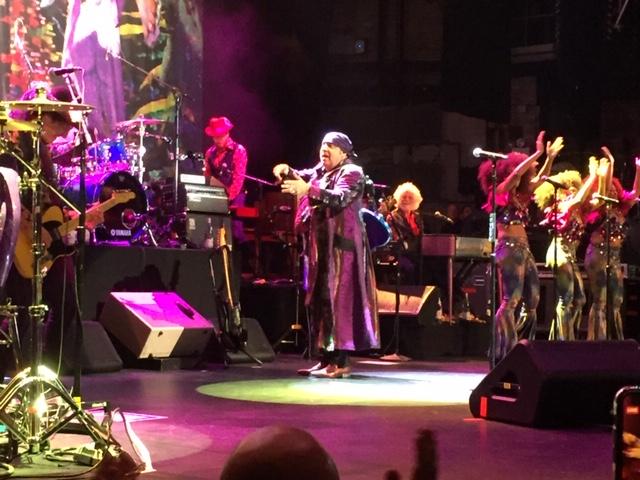 Little Steven and the Disciples of Soul gave us a rock and roll show at the Beacon Theatre last night. I use the term show as opposed to concert advisedly. There were costumes. There were characters. There was choreography. And boy, was it fun.

After a rousing nine song set by J. Geils front man Peter Wolf, the Disciples hit the stage (at a very manageable 8:45 pm) dressed in outfits that looked like technicolor versions of the costumes from The Deuce. The male band members were in matching candy-striped pants and floral shirts; some with feathered pimp hats. The horn section was resplendent in matching vests. The three female background singers (an inadequate term because they were hardly in the background) sported enormous Afro wigs in assorted colors. And Mr Van Zant entered in a cape to match his usual bandana.

This band sounds as good as it looks. With two keyboards, two guitars, five horns and a percussionist they produce a wall of sound. And the background singers must have lost 5 pounds each from their vigorous dancing. Steve and company played just about all of their most recent “Summer of Sorcery” album. I liked the album but not as well as 2017’s “Soulfire”. I was hoping for a few songs from that album, but they were a no show, along with a hoped for appearance by  Bruce. Oh well. There was also a mini-set of three songs Steve and Bruce wrote for Southside Johnny, as well as two old chestnuts – “I Am A Patriot” and “Sun City”. Isn’t apartheid long gone? Maybe time to retire the song. “Soul Power Twist” was accompanied by some volunteer go-go dancers from the audience.

Steve Van Zandt as a front man doesn’t have the voice of Wolf or Bono, or the dance moves of Jagger. He’s more like a benevolent ringmaster keeping control of the circus, and that he does very well. And he plays guitar better than any of them.

As for Peter Wolf, the man still kicks ass, even though he evidently doesn’t have one. How does a man his age stay so skinny? Somebody give him a sandwich, please! He fronted a fine 5 piece band led by veteran guitarist Duke Levine. Not many openers bring the crowd to their feet, but he did. Wolf later returned to do Freeze Frame with the Disciples.

A good time was had by all.