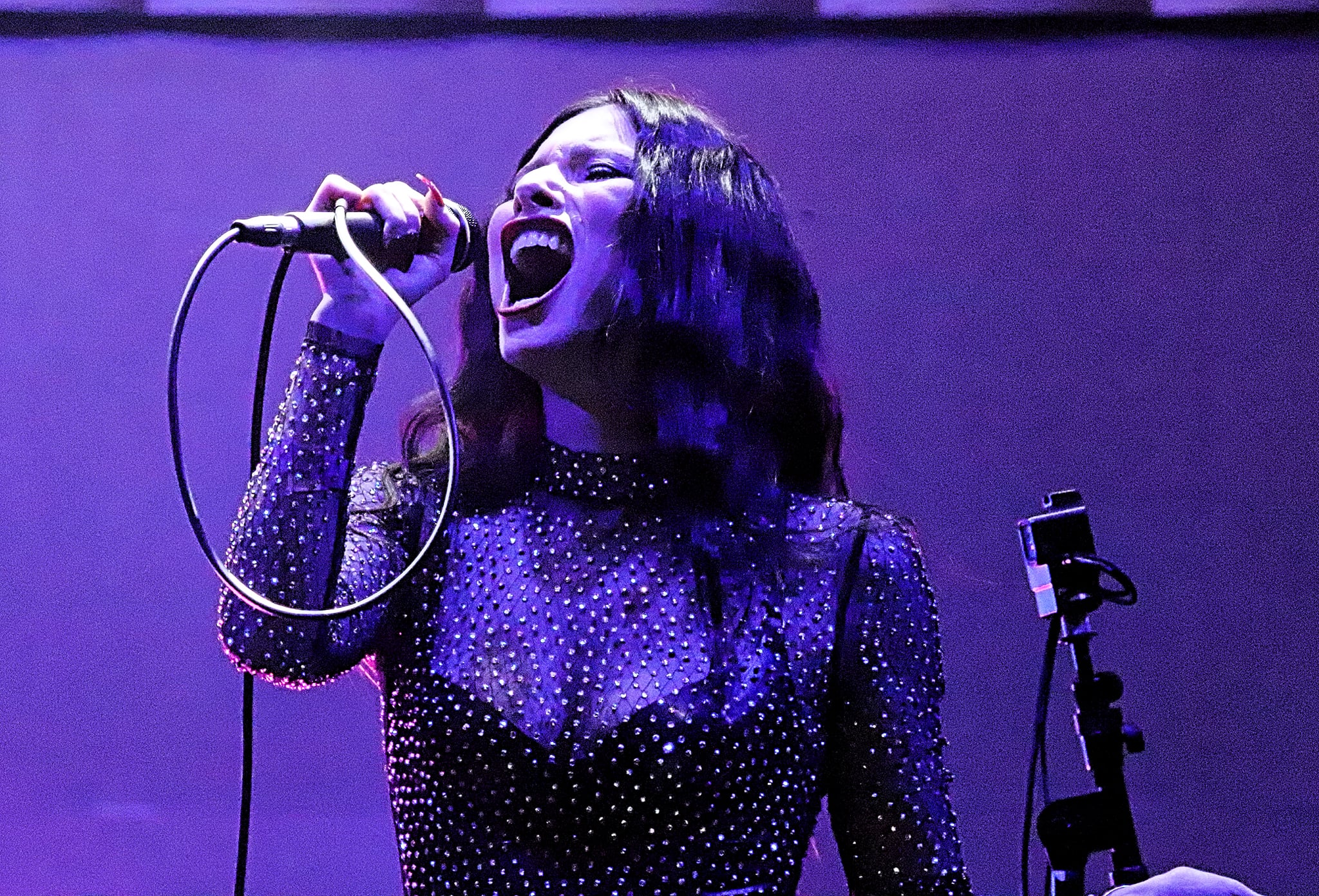 Boan, one of the bands featured at Lethal Amounts showcase

On Friday night, Lethal Amounts curated a night of outdoor performances at Levitt Pavilion, and you can always count on Mr. Sex Cells/Danny Fuentes to pick a few interesting dark-wave artists at the fringe of the underground. N8NOFACE, Riki, and Boan were on the bill while DJ Danny filled the gap between the performances, with a selection of his fav post-punk and goth tunes. It was an all-electronic night of 3 acts with very different personalities, and even the crowd looked different from the otherwise familial nights at the Levitt Pavilion.

First, N8NOFACE gave us the most aggressive set of the night. Nathan Hose fully lives his stage persona: his primal scream is visceral, his robotic video game moves are completely enjoyable and hilarious while his punk-meets-dark-wave-meets-gangster-rap compositions are unique and multi-influenced. His short songs were received like euphoric bullets and people even started a mosh pit, one of the first I have witnessed since the pandemic. At times, I thought he was about to start a hardcore show with Bad Brains vibes and the sinister synth sound of Ho99o9, the genre-crossing punk duo, at other times, he was slowing down while keeping this same street attitude and punk-style vocals. Unsurprisingly, I read afterward that one of his songs, ‘Punk-Police’ appeared on one of the band H09909’s tracks, and he has also been featured on ‘Flesh and Blood.’ When you have heard that freak-out scream once you immediately recognize it. It doesn’t take very long to see if a performer connects with his audience and N8NOFACE immediately did it with a mix of furious and fast beats, heavy synths, drum machines, and samplers. This futuristic cyberpunk simply had enough stage presence to captivate punks and goths united. His 20-track album, Bound To Let You Down – 20? yes, but his songs are truly short – was released by the groundbreaking label Eyeball Records, and hopefully, next time I see N8NOFACE, he will be opening for Ho99o9.

Riki changed the tone with a different darkwave synth-style beaten by some metallic beats. While her real name (Niff Nawor) sounds much more intriguing than her moniker, she stayed mysterious despite some sexy dance moves. Her first song – all beats, and melodic vocals – gave me a sort of Björk vibe, and her set was a series of post-punk-synth-pop with strobe lights all around some propulsive dancefloors with a European flavor. Niff has been active in the deathrock-anarcho-punk scenes of the California bay area (she is a former member of Crimson Scarlet), but her solo project Riki, her most personal project, is anchored in dense, dark symphonic synth-pop compositions with industrial beats. Her vocals were going from icy sensual to ethereal pop, and if I could barely understand the lyrics, I also read that she has written an entire song in German, which makes complete sense when you understand her sonic aesthetics. She played a new song, a vaporous soundscape with a poppy, sensual and adventurous melody, while a song, ‘Come Inside,’ had the layers of a Massive Attack composition. She covered the famous Spanish song ‘Porque Te Vas,’ and layered her beats with a melodica for her last song, all imbued with ’80s nostalgia.

The duo Boan was all allure and style with a unique approach to synth-pop-wave. Using hardware electronics, synths, and drum machines (from what I could see and guess) Jose Cota and Mariana Saldana were creating textured and dense landscapes looping around themselves. As two ex-members of the now-defunct electro-trio Medio Mutante who released the critically acclaimed EP ‘Inestable’ in 2008, they built up a sharp groove of acid electronica, while Mariana’s reverb vocals were animating the scene with a fierce presence. The beats were fast, knife-like, even angular, and they were abruptly fallen over electronica and synth swirls, looping like deconstructed dance music. ‘The first song after over a year and a half,… let’s not do that again,’ Mariana Saldana said after their first song before continuing in Spanish. The atmosphere couldn’t have been more fascinating and bizarre, filled with punchy icy rhythms, innovative beats, and intriguing lyrics in Spanish delivered with a Bauhaus theatricality thanks to Mariana’s alluring silhouette. Their last song reminded me of a synth hit of the ‘80s, lost in my memory and forgotten, but brought back to life with minimalist synth beats.