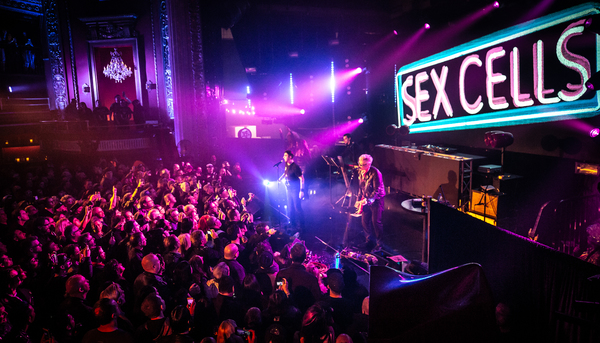 HERCULES AND THE LOVE AFFAIR

Los Angeles art gallery and promoter Lethal Amounts will be taking their signature club night – Sex Cells on the road this fall. Marc Almond of Soft Cell will be returning to the club stage as a headliner after making his debut in February on the club’s second anniversary.  This tour is particularly special since Sex Cells was created in homage to the lurid and seedy lyrics of Almond’s band. The infamous club name is a combination of Soft Cell and their song “Sex Dwarf” which describes a dominatrix in a Rolls Royce, perfectly embodying the regular cast of characters that have come to define the night.

Sex Cells, which got its start in Los Angeles has become a clubhouse for some of LA’s most eccentric and creative people to get decked out and turn heads with talented line-ups and music.  As with most things Lethal Amounts, the club night has its foot in the past and in the future, paying homage to the originators of dance music while showcasing modern-day Electro, Techno and Indie Dance artists.

“Danny’s Sex Cells party was simply out of this world, sensational. It was a great thrill to play in LA to such an amazing, beautiful crowd. Unforgettable and mind-blowing. We can’t wait to come over again soon.”

Joining Marc Almond on all he dates is Hercules and The Love Affair performing a DJ set.  Additional performers on select dates include TR/ST, Dita VonTeese,  Plack Blague and more.

‘Sex Cells is total freedom. A post-everything universe of its own… what you spent your whole youth imagining what the night could be.” – Wes Eisold of Cold Cave

Lethal Amounts inhabits a physical gallery space in downtown Los Angeles that features three exhibition rooms and over 2,500 sq. ft. The gallery focuses on subversive and counter-culture themes throughout history, addressing the social and artistic value of underground movements while highlighting taboo topics. They showcase the extremes of individuals who have moved culture forwards, living on the edge and outside of societal norms. Rock ’n Roll of the past that has crossed over into pop culture fanaticism, street culture influences and cult hero worship. Artists who have shown in the gallery include Leee Black Childers (the house photographer for Andy Warhol’s Factory), famed punk rock photographer Edward Colver, Nick Zinner from the Yeah Yeah Yeahs, Al Jourgensen, Psychic TV, John Wayne Gacy and more. Highlights from this year include the “Nick Cave Smoking” exhibit, Shawn M. Crahan (of Slipknot’s) “His Whores Exhibit,” and on Halloween, Lethal Amounts produced an Anton LaVeyevent

featuring an exhibit of photography and ephemera from the colorful, and notorious cultural icon (see the LA Times mention HEREand the LA Weekly Cover story HERE).