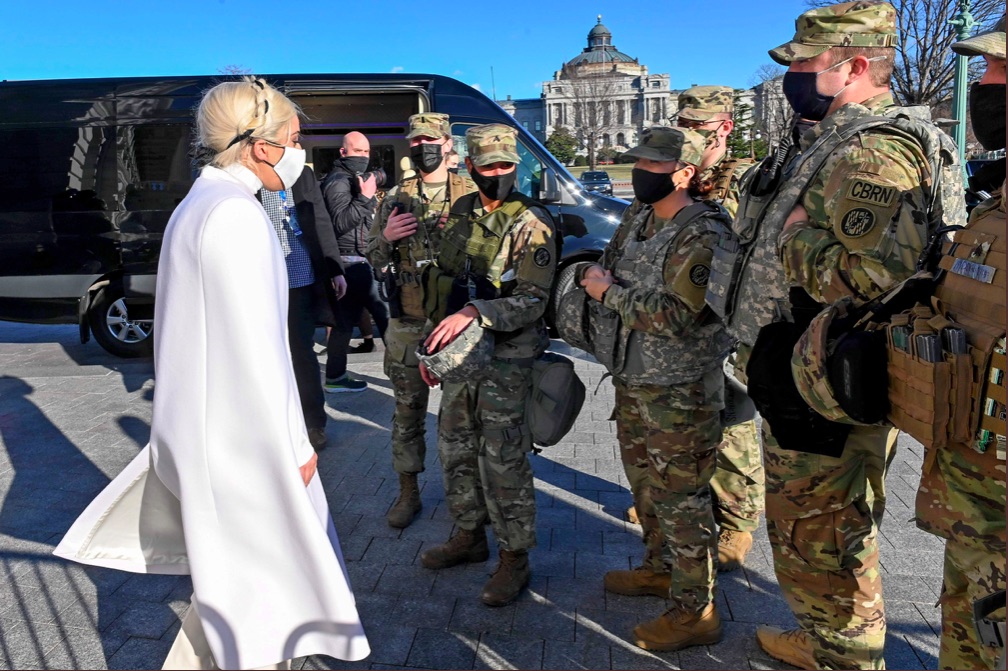 With 25,000 National Guardsmen in Washington DC, Joe Biden’s inauguration may be the most protected presidential inauguration ever, but it’s also the most star-studded one. Tomorrow, Tom Hanks will host a special show to be aired on all major networks featuring musical performances from Garth Brooks, Lady Gaga, Jennifer Lopez, Bruce Springsteen, Justin Timberlake, Jon Bon Jovi, Demi Lovato, the Foo Fighters, the newly-reunited New Radicals (who will perform their 1998 hit song ‘You Get What You Give’) and probably many more.

This is a prestigious line-up, Lady Gaga was already in town today, and was photographed wearing an immaculate white cape in front of National Guards as if she wanted to start a new meme – this certainly brought a strong Princess Leilah/Star Wars/New Hope vibe. Gaga could even be heard rehearsing the national anthem, from the distance.

According to The Washington Post, Trump is furious that Lady Gaga, Jennifer Lopez, and all these A-list stars have accepted to perform for Biden’s inauguration when everyone refused to do so at his 2017 inaugural ceremony. Furious? Honestly, the most surprising part of the story is that he still feels offended. Elton John and Billy Joel may have attended his wedding to Melania, but this was in 2005, and a lot happened since his reality show days! oh, I don’t know… an insurrection, a failed coup, a second impeachment?… But the fact that he describes what’s happening an ‘unfair treatment from all sides – from people he hired, from businesses he helped with his policies, from members of his own party and even from celebrities – shows how delusional and sick he is.

Dozens of stars refused to perform at Trump’s inauguration, and if you cannot remember, this Vox article will bring back a few very satisfying memories: Elton John, Andrea Bocelli, Celine Dion, Garth Brooks, Moby Charlotte Church, Jennifer Holliday, the Beach Boys all declined to perform at Trump’s inauguration, as well as Kiss – although coward Gene Simmons declared it was due to a schedule conflict.

So let’s celebrate the Biden era with his A-list, but a pissed-off Trump can never be a good thing, and many people think he will release his final list of pardons at the last minute, in a last attempt to steal the show.