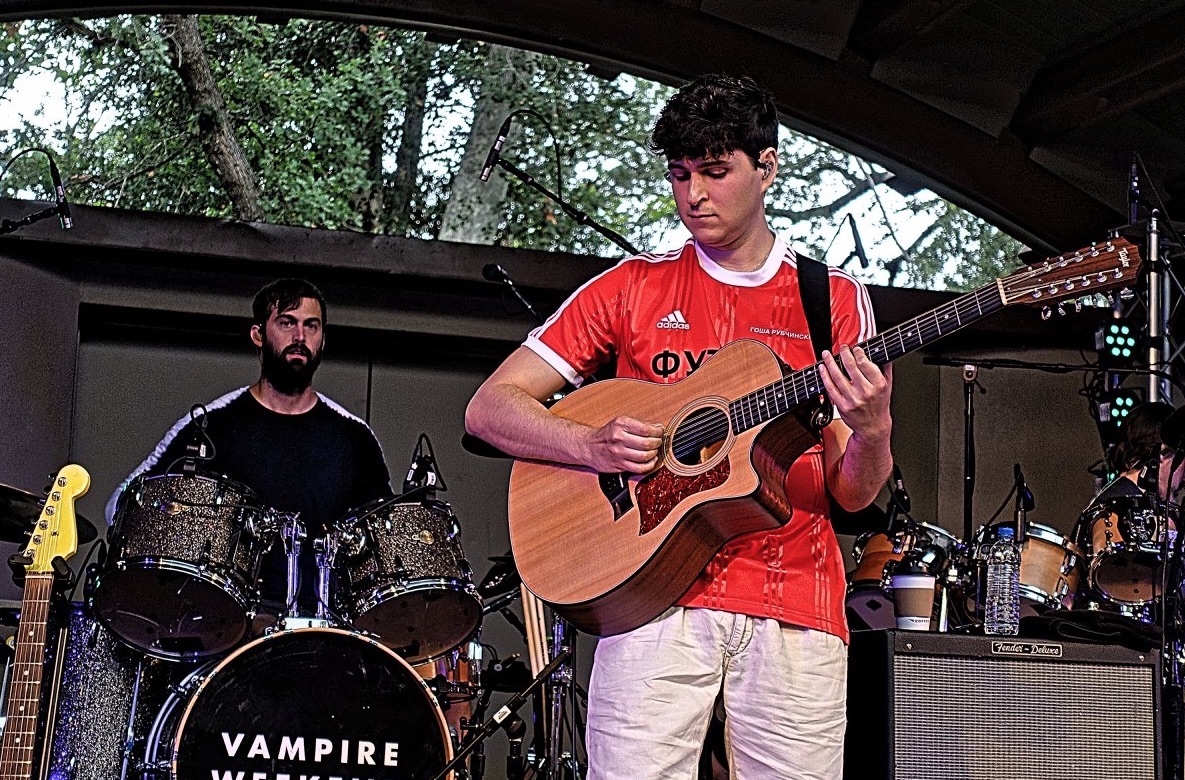 Vampire Weekend are at the Hollywood Bowl on Wednesday

On Tuesday 1st
Banks, Kevin Garrett are at the Hollywood Palladium
Charli XCX, Brooke Candy are at the Wiltern
John Prine is at the John Anson Ford Theatres
Still Woozy, Remi Wolf are at the Fonda Theatre
Angels & Airwaves are at The Belasco Theater
Hoodie Allen, Jake Miller are at the El Rey Theatre
All That Remains, Lacuna Coil, Bad Omens, Toothgrinder, Uncured are at The Regent Theater
Band-Maid are at the Echoplex
TWRP, Rich Aucoin are at the Echo
Michael Nesmith is at The Grammy Museum
Ruston Kelly, Donovan Woods are at The Troubadour
Madison Cunningham, Jake&Abe are at the Bootleg Bar
Raveena, Dianna Lopez are at The Roxy
We Found New Music has The Ceremonies, Blake Rose, Waiting For Smith at Madame Siam
Paul Cauthen is at the Moroccan Lounge with Desure, Anna Rose
Logan Hone, All-Time Forever Band, Picky Bunches, DJ B. Levinson are at Zebulon
Xtine and the Wreckless Hearts, The Hot Licks are at the Redwood

On Wednesday 2nd
Vampire Weekend, Tinariwen, Richard Pictures are at the Hollywood Bowl
Still Woozy is at the Fonda Theatre with Remi Wolf
Carbon Leaf are at the Moroccan Lounge with Peter More
Shura, Quinn Christopherson are at the Teragram Ballroom
Yoke Lore is at the El Rey Theatre with Bad Bad Hats
Starset are at the Regent Theater with Palisades, Hyde, A Brilliant Lie
The Shelters, The Jacks, The Bash Dogs are at the Echo
Natasha Bedingfield is at Amoeba
Nilüfer Yanya, Hana Vu, Jazzi Bobbi are at The Lodge Room
Wardell are at the Bootleg
Sleeping Lion, Simon XO, Cassie Marin are at The Satellite
KidEyes, Tiffany Stranger, Champs, The Social are at The Hi Hat
Ruston Kelly, Donovan Woods are at The Troubadour
Christian French, ASTN are at The Roxy
Quentin Tarantino and Friends are at The Grammy Museum
Black Joe Lewis and the Honeybears are at Zebulon
We Found New Music Presents has Kid Eyes, ID Eyes, Tiffany Stringer, Champs at Madame Siam

On Thursday 3rd,
Calexico, Iron & Wine are at the Orpheum Theatre
Cigarettes After Sex are at the Wiltern
Tank and The Bangas are at the Fonda Theatre with Adia Victoria
PORCHES, Girlpool are at the Hollywood Forever Cemetery
Dominic Fike, Deb Never are at the El Rey Theatre
Scotty McCreery is at The Novo with Temecula Road
Marc Broussard, Samantha Fish are at The Troubadour
The Long Ryders,  Ford Madox Ford are at The Roxy
Mashrou’ Leila are at The Regent Theater with Narcy
Grandparents, Jean Dawson,Tony Velour are at The Echo
Tanya Tucker is at The Grammy Museum
Chick Corea Trilogy, Christian McBride, Brian Blade are at UCLA Royce Hall
Mercury Rev, Beth Orton, Marissa Nadler are at the Palace Theatre
DAN SADIN is at the Bootleg with Kat Myers, Ronboy
Cherubs, Low Dose, Grave Zone are at Zebulon
Joan Shelley is at the Moroccan Lounge
Guppy, Cheekface, Ember & His Orchestra are at The Hi Hat
Joe Hertler & The Rainbow Seekers are at the Satellite with Los Elk, Madeleine Mayi
Bella Novela, Car Sex, Kilo Bravo are at Redwood

On Friday 4th
Vampire Weekend are at The Grammy Museum
Marco Antonio Solis is at the Hollywood Bowl
Marina, Allie X are at The Greek Theatre
Reignwolf are at the Fonda Theatre with L.A. Witch, Irontom
Big K.R.I.T. is at The Belasco Theater
Mahalia is at the El Rey Theatre with Sebastian Mikael & JVCK JAMES
COMMON KINGS are at the Novo with Eli Mac, Landon McNamara, Big Body Cisco, Westafa
Felipe Esparza is at the Microsoft Theater
Nikki Lane is at The Roxy with Carl Anderson
Vivian Girls are at The Regent Theater
The Budos Band are at the Teragram Ballroom with Paul & The Tall Trees
Marc Broussard, Samantha Fish are at The Troubadour
Cynister, Thrill You Kill You, Flames of Durga are at the House  of Machines
Billy Strings is at The Lodge Room
Songhoy Blues are at the Moroccan Lounge
L. Martin (of The Walters), Small Forward, Marcus Buser & The Space Heaters, Georgia Greene are at The Hi Hat

On Saturday 5th
RÜFÜS DU SOL, Bob Moses, Lastlings are at Los Angeles State Historic Park
Peter Frampton, Jason Bonham’s Led Zeppelin Evening are at The Forum
Greta Van Fleet, Shannon and the Clams are at the Hollywood Palladium
Loud Luxury are at The Novo
Barbara Mason, Brenton Wood, Felix Cavaliere’s Rascals, The Dramatics, The Manhattans, Eddie Holman, Brenda Holloway, The Intruders, Little Willie G, Trish Toledo, The Persuaders are at the Greek Theatre
Stiff Little Fingers, The Avengers are at the El Rey Theatre
Hiss Golden Messenger is at the Teragram Ballroom with Daughter of Swords
Nitzer Ebb, Surachai are at The Regent Theater
Movits! are at The Echo
Blanck Mass, Helm, Steve Hauschildt are at Zebulon
The Motet are at The Lodge Room with JENNIFER HARTSWICK, NICK CASSARINO
Wrabel & Billy Raffoul, Joy Oladokun are at The Troubadour
In Real Life are at The Roxy with Asher Angel
Domo Wilson is at the Moroccan Lounge
Cat Scan, Traps PS, Susan are at The Hi Hat
Josie Cotton, Prima Donna are at The House of Machines
The Seven & Six, The Rebel Set, The Reflectors, The Sound Station, Thee Azmatics are at the Redwood

On Sunday 6th
Van Morrison, Melody Gardot are at the Hollywood Bowl
Greta Van Fleet, Shannon and the Clams are at the Hollywood Palladium
Band of Skulls are at The Mayan Theater
Danny Duncan is at The Regent Theater
BENITO SKINNER is at the El Rey Theatre with Mary Beth Barone
SHADOW PROJECT 1334, GITANE DEMONE QUARTET, Terminal A are at the Echoplex
The Rhyolite Sound, Nicholas Mudd Band, The Broken Smokes, Friends In Low Places DJs are at The Echo
Duderella, Trap Girl, Royalties are at the Moroccan Lounge
BEATROCK MUSIC 10-YEAR ANNIVERSARY FESTIVAL is happening at the Bootleg with RUBY IBARRA, Bambu, Rocky Rivera, DJ Phatrick, DJ ROZA, Klassy, Prometheus Brown, Otayo Dubb, Power Struggle, Faith Santilla, Golden Age Society, The Bar
Dirty Cakes, the Humblers, Bummed Out, Total Massacre are at the Redwood