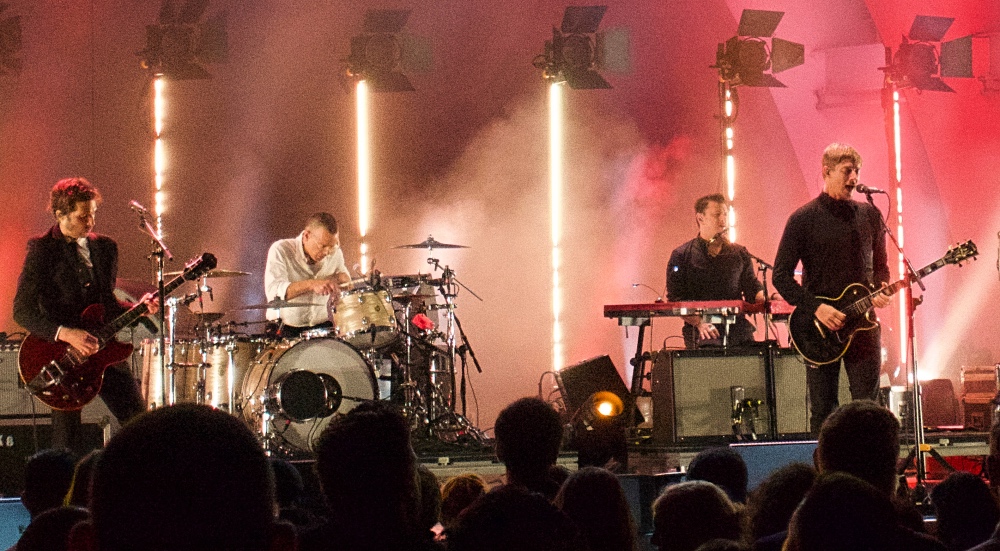 Interpol at the Hollywood Bowl

On Monday 21st,
Tool, Killing Joke at the Staples Center
Jonas Brothers, Bebe Rexha, Jordan McGraw are at the Hollywood Bowl
Lizzo is at the Hollywood Palladium
Lauv, Bülow are at the Wiltern
Half•alive are at the Fonda Theatre with Sure Sure
Rhiannon Giddens, Francesco Turrisi are at The Grammy Museum
Maisie Peters, Jack Gray are at The Troubadour
La Santa Cecilia are at Amoeba Music
Landon Cube is at The Roxy with 24kGoldn
It’s A School Night! has Belaganas, Jordy, Sydanie, Ice Cream at the Resident DTLA
Kristeen Young, Doctrin, Ugly Sweaters are at The Satellite
Healing Gems are at the Echo with Oozelles, Billy Changer, Grave Flowers Bongo Band
PUNK THE CAPITAL: A DC Punk Documentary is happening at The Regent Theater
THE SPEED OF SOUND IN SEAWATER, 100 ONCES, SO MUCH LIGHT, CATBAMBOO are at the Hi Hat
Teleskopes, ASHRR, Mind Monogram, Landroid are at the Moroccan Lounge
Ofir Ganon is at Zebulon
Sodaboxx, Sokotono, East Bay are at the Redwood

On Tuesday 22nd,
Rex Orange County is at The Roxy
Caravan Palace are at the Wiltern
Luke Combs is at The Greek Theatre with Morgan Wallen and Jameson Rodgers
Mumiy Troll are at the Fonda Theatre
Surf Curse are at Amoeba Music
Chloe Lilac is at The Echo with Phebe Starr, R E L
Melissa Etheridge, Carnie Wilson, Judith Hill, Antigone Rising are at The Grammy Museum
Nai Palm is at The Lodge Room with Clever Austin
Cure Crohn’s & Colitis with Bill Burr, Jakob Dylan, Josh Homme are at Largo at the Coronet
We Found New Music has Kevin, Cuffed Up, Asa Ey, Special unannounced guest at Madame Siam
SUBHUMANS are at the Echoplex with Neighborhood Brats, SMUT, Fissure
Allegaeon,  Inferi, Paladin are at The Hi Hat
Gabie Strong, Tara Jane O’neil, Jmy James Kidd, Anna Homler, Pauline Lay, Elaine Carey are at Zebulon
DELTA RAE are at the Bootleg with Frances Cone
Agnes Azria, Kemper Sisters, GOLDSPACE are at the Satellite
Xtine and the Wreckless Hearts, United X Bombs, Nebulaen, The Living Roomers are at the Redwood

On Wednesday 23rd,
Hozier is at The Grammy Museum
Jade Bird, Flyte are at the Fonda Theatre
Luke Combs is at The Greek Theatre with Morgan Wallen and Jameson Rodgers
Dean Lewis is at the Wiltern
Black Pumas, Neal Francis are at The Regent Theater
We Go Holic are at the El Rey Theatre
The Legendary Pink Dots, Orbit Service are at The Echo
slenderbodies, Hazey Eyes are at The Troubadour
Municipal Waste, Napalm Death are at the Teragram Ballroom
Meute are at The Roxy with Jimbo Jenkins
Creating Monsters, The Oil Barons, Thriller Party, NHALA are at The Satellite
Loote are at the Moroccan Lounge
BUSY PHILIPPS is at the Bootleg
AIRPLANE MODE RESIDENCY featuring Zackey Force Funk, DJ Alter, N8NOFACE, Leanna Rachel, Lazy Marf, The Gaslamp Killer are at The Hi Hat
Café Molly, PARTCH Ensemble, John Schneider, TJ Troy, DJ Isabella are at Zebulon
telomirror, Siro, black monroe, Thee Terabyte are at the Redwood

On Thursday 24th,
The Who, Liam Gallagher are at the Hollywood Bowl
GRiZ is at the Hollywood Palladium
JESSIE REYEZ is at The Novo,
Devendra Banhart is at The Theatre at Ace Hotel
Aldous Harding is at The Masonic Lodge at Hollywood Forever Cemetery
Black Pumas are at The Lodge Room with Neal Francis
LeyeT is at The Sayers Club
GWAR, Sacred Reich, Toxic Holocaust, Against the Grain are at The Belasco Theater
Lucky Daye is at the El Rey Theatre with Josh Dean, Ambre
Dorian are at the Echoplex
Plague Vendor, No Parents, Spirit Mother are at The Echo
Slow Hollows, Iam Sweet are at the Moroccan Lounge
Municipal Waste, Napalm Death are at the Teragram Ballroom
Witt Lowry, Xuitcasecity, WHATEVER WE ARE are at The Roxy
Guitar Center Music Foundation Benefit concert for the kids is at The Troubadour
Caroline Polachek, Alaska Reid are at Zebulon
THE MAGICIAN is at Catch One
OH LAND is at the Bootleg
Jesika von Rabbit, Spirit In The Room, Cody Berry are at Harvard & Stone
CHIDO, chevere, cool featuring Cosmica 15-Year Anniversary Party with Junior Mesa, Salt Cathedral and SUPER SECRET GUEST are at the Hi Hat
Loud Forest, Primaveras, KiNG MALA, Follies & Vices are at the Satellite
Bella Novela, Los Mysteriosos, Parents are at the Redwood

On Friday 25th,
Hozier, Freya Ridings are at the Greek Theatre
Tiger Army,  Brian Fallon, The Delta Bombers are at the Wiltern
Hiatus Kaiyote is at The Novo with Anna Wise, SilentJay
Mikal Cronin is at the Teragram Ballroom with Spring Summer
Aldous Harding is at The Masonic Lodge at Hollywood Forever Cemetery
Booba is at the Fonda Theatre
Brasstracks, Jak Lizard are at The Troubadour
Agnostic Front is at The Roxy with Prong and Berthold City
SOULECTION: THE SOUND OF TOMORROW is happening at the El Rey Theatre with AFTA-1, Gwen Bunn, ESTA, Jared Jackson, Lakim
Joe Pug is at THE PICO UNION PROJECT
Jacques Greene is at the Echo with Lights Down Low DJs
Danny Brown is at the Regent
Brent Cobb and Them are at The Lodge Room
Tom Speight is at the Moroccan Lounge and later Messer Chups are at the Moroccan Lounge
Gatecreeper are at Zebulon with Kömmand, Section H8, Death Bells
BLAKTINX ALUMNI CONCERT / INGREDIENTES is happening at the Bootleg
Man Man are at The Hi Hat with Ether Feather, Kate Berlant
Streetwalkin’ Cheetahs, Glitter Trash, Brainspoon, Barrio Tigers, DJ Bon Bolles are at the Redwood

On Saturday 26th,
Morrissey, Interpol are at the Hollywood Bowl
Incubus, Wild Belle are at the Greek Theatre
Tiger Army, Brian Fallon, The Delta Bombers are at the Wiltern
J Balvin, Eladio Carrion, Lyanno are at the Staples Center
Highly Suspect, Slothrust are at The Novo
Amon Amarth, Arch Enemy, At the Gates, Grand Magus at the Hollywood Palladium
Aldous Harding is at The Lodge Room with Hand Habits
Lucy Dacus is at the Teragram Ballroom with Liza Anne, Sun June
Foy Vance is at the Palace Theatre with Ryan McMullan
Dorian Electra, Mood Killer, Dylan Brady, Socialchair, Robokid are at The Echo
Cory Wong, Paris Monster are at The Troubadour
Sunset Rollercoaster are at The Roxy with Ruby Haunt
Engelbert Humperdinck is at the Saban Theatre
Abla Fahita is at the Orpheum Theatre
The Weeks, Future Thieves, H.A.R.D are at The Hi Hat
Sean Hayes is at the Moroccan Lounge and later Swirl Sessions with TEK.LUN Deffie, MadBliss, D.K. The Punisher, Roto are at the Moroccan Lounge
BLAKTINX ALUMNI CONCERT / INGREDIENTES is happening at the Bootleg
Fell Runner, Sofia Bolt, Bridal Party (Victoria, BC) are at Zebulon
Speed of Light, the Absurd, Wily Savage, Charley Waffles, Karma Vulture, Pedal Strike, Flames of Durga Los Fauna, La Tumba are at the Redwood

On Sunday 27th
Incubus, Wild Belle are at the Greek Theatre
(Sandy) Alex G, Tomberlin, Slow Pulp are at the Fonda Theatre
Chase Rice is at the Wiltern
Dallas Moore is at The Echo with Sarah Gayle Meech, Rob Leines
Marc Almond (of Soft Cell) with Dita Von Teese are at the Palace Theatre
CHAMELEONSVOX, THEATRE OF HATE, JAY ASTON are at the Echoplex
Gente De Zona are at The Regent Theater
Evan + Zane are at the El Rey Theatre
Exhumed, Necrot at The Hi Hat
FOUNTAINSUN, Wildboy are at Zebulon
Living Dolls, Armoires, Ex Teens, Velvateen, Unit F, Twisted black Sole are at the Redwood