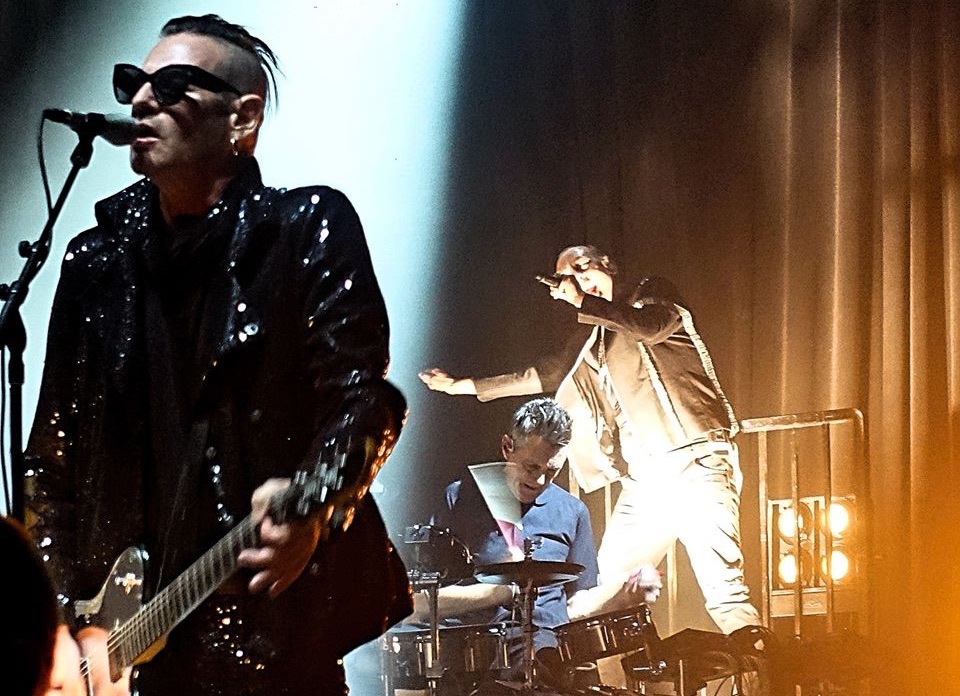 Bauhaus has another show at the Palladium, Madonna at the Wiltern and Slayer have two shows at the Forum

On Monday 25th
Madonna is at the Wiltern,
TURNOVER,  Men I Trust are at the Fonda Theatre with Renata Zeiguer,
Liz Phair is at Largo at the Coronet,
The Dear Hunter, Gavin Castleton are at the Teragram Ballroom,
It’s A School Night! has Elijah Woods x Jamie Fine, O Future, and more at Bardot Hollywood,
Stranger Liquids, The No. 44, Spirit Mother, Paracosmic, THE EYYES, Liquid Light Show are at The Satellite,
Lingua Ignota is at Zebulon,
A Benefit For United We Dream with Chelsea Rose, Zelda and the Lo Los, Rachel Mazer, Ghost Woman is happening at Gold-Diggers,
AGNEZ MO is at the Roxy with Goldiie,
ROSIE TUCKER are at the Bootleg with Ramonda Hammer, Bella Porter, Pauline Lay, Jess Kallen,
Crook are at the Echo with Bob Villain, Boy Deluxe, KEVIN, Yung Nak,
9 Casuis, 945 Kid Carrion, 1030 This is a Train Wreck, 1115 Joy Weather are at the Redwood,

On Tuesday 26th
The Chainsmokers, 5 Seconds of Summer, Lennon Stella are at The Forum,
TURNOVER, Men I Trust are at the Fonda Theatre,
The Dear Hunter, Gavin Castleton are at the Teragram Ballroom,
Dick Jr., The Volunteers are at The Roxy,
Reel To Reel: “Chick Corea: In The Mind Of A Master” with Chick Corea is happening at The Grammy Museum,
WILD are at the Bootleg with Johnny Gates, JEMS,
THE COLOUR COAST are at the Hi Hat with Surely Lorraine, Time Travelers,
Vinyl Williams is at the Echo with Al Lover, Ofir Ganon,
Total Recluse are at the Satellite with Jody, Crystales, Reflective Detectives,
Sondra Sun-Odeon band is at Zebulon with Secret Flowers, Nico Turner,

On Wednesday 27th
Kevin Gates is at The Novo with YK Osiris, Rod Wave, SDoT Fresh,
A$AP Ferg, MadeinTYO, Bas are at the Hollywood Palladium,
Filter, Of Limbo, Migrant Motel are at The Regent Theater,
Flipper, David Yow, Mondo Generator, Angry Samoan, Latre Years, Total Massacre are at The Roxy,
Spendtime Palace, The Brazen Youth, Blanco Niño are at The Lodge Room,
Monolord, Blackwater Holylight, Yidhra are at the Teragram Ballroom,
Repenter, Hvnted, Love Ghost, Dawne, Dean Batten are at The Troubadour,
Sleeplust, Mr. Max, Turtles on Speed, The Venus in Scorpio are at The Satellite,
Desert Nights with Black Nile, Brandon Eugene Owens are at The Standard,
Mean Heat, The Letter Openers, Crisis Actor are at Highland Park Bowl,
Prince of Lilies, Heavy Velvet, Friendly Bear are at the Redwood,
THE GASLAMP KILLER, Antman Wonder, Iman Omari, Wyldeflower, Oh Gosh Leotus are at the Hi Hat,
Shashanka Bakshi, Liberate Elemental Forces are at Zebulon,
Gothic Tropic, Los Dead Dreams, Queen Kwong , Living Roomers are at the House of Machines

On Friday 29th
Slayer, Primus, Ministry, Philip H. Anselmo, The Illegals are at The Forum,
10 Years of Never Say Die Records – A Decade of Dubstep with Moody Good B2B Space Laces; Trampa B2B Midnight Tyrannosaurus; Spag Heddy B2B Kompany; MUST DIE!;  Megalodon B2B Krimer are at the Shrine Expo Hall,
AUDIEN is at the Novo with Codeko, BRKLYN,
SEB WILDBLOOD is at Catch One,
Transviolet, ARMORS, The Griswolds are at The Troubadour,
Fortunate Youth, Nattali Rize, Kash’d Out are at the Teragram Ballroom,
Ultra Q with Kuromi, On Drugs, Archer Oh are at The Roxy,
The Locust, Big Business, Geronimo are at The Regent Theater,
2 Reinas are at the Microsoft Theater with Paquita la del Barrio, Marisela,
Such Hawks Such Hounds with Fatso Jetson is happening at The House of Machines,
Maio, Black Monroe, Talk 2 Strangers are at the Highland Park Bowl,
Russ Liquid are at the Moroccan Lounge,
BLACK METAL FRIDAY is happening at the Hi Hat,
ENSIFERUM, Kalmah, Abigail Williams, Aenimus are at the Echoplex,
Black Noize are at the Satellite,
Trevor Dury, Marjorie Fair, Some Gifts are at the Redwood,

On Saturday 30th,
Slayer, Primus, Ministry, Philip H. Anselmo, The Illegals are at The Forum,
Bea Miller is at the Fonda Theatre with Kah-Lo, Kennedi,
Grits & Biscuits are at the Hollywood Palladium,
No Suits, Jackii Kennedy, Honor Flow, Andre Jay, War Strings are at The Troubadour,
COMETHAZINE is at the Novo with MaxThaDemon,
Crucial Star, Slchld, Late Lee are at The Roxy,
Dirtwire, Maria del Pilar, Unnynn are at the Teragram Ballroom,
Festy Baby with Annabelle Maginnis, Slip, VS Colour, Ariel Beesley, Andy Clockwise, Collapsing Scenery are at The Lodge Room,
The Greyboy Allstars are at the Moroccan Lounge,
Tokyo Lucky Hole with Nick Flessa, Shiro, Shunkan are at Highland Park Bowl,
PASS THE STICKS are at the Bootleg with Blue The Great,
JP Harris is at the Echo with Lasers Lasers Birmingham, Wyman & The Wolves,

the tall glass of water returns

Press Releases For October, Here Are The Artists

A luminous and soulful melody

we really create ourselves in our own image and art

I scratch and kick and bite and punch

if his songwriting skills have eroded, his life performance never

Music Venues Impact A Concert Experience Much More Than You Think

the more distractions inside the venue, the less satisfying the performance is going to be