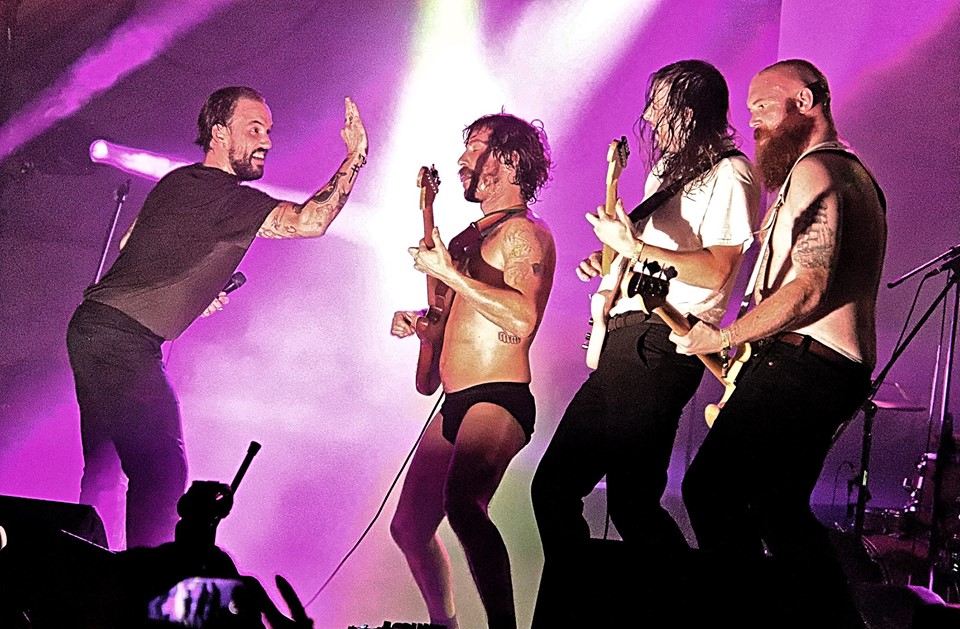 On Monday 20th, Boogie is at the Roxy with Bobby Sessions, KB Devaughn, The War and Treaty are at The Troubadour, It’s A School Night! has Grady, Eloise, Golf Alpha Gravy, Speelburg at Bardot, Reo Cragun, Hablot Brown, Harry Teardrop are at the Moroccan Lounge, Harry Katz & The Pistachios The Satellite with MAWD, Brenda Carsey, Oriah, CAPYAC are at the Echoplex with Holander, Trouble In The Streets, Pearl Earl, Polartropica, Balthazar are at the Echo with Goldensuns, Rudy De Anda.

On Tuesday 21st, Johnny Marr is at Ford Theatres, Snow Patrol are at the Wiltern with Billy Marten, Ryan McMullan, Lovelytheband are at the Fonda Theatre with Flora Cash, Jagwar Twin, BLACK STAR FEATURING TALIB KWELI & YASIIN BEY are at The Novo, Kevin Garrett are at The Troubadour with Minke, Jaz Coleman (of Killing Joke) is at the Bootleg Theater, John Kadlecik’s Fellowship of the Wing are at the Teragram Ballroom, Reel To Reel: Echo In The Canyon is happening at The Grammy Museum Featuring Jakob Dylan, Andy Slater, Jade Castrinos, Higher Brothers are at The Regent Theater with Don Krez, Higher Sister, Spirit Adrift are at The Echo with Haunt, Daisy Chain, Charlie Burg is at the Moroccan Lounge with Remi Wolf, and later Adam Melchor is at Moroccan Lounge with Joshua Speers, KATIEE, Sam Mickens, Moisture Boys are at Zebulon, Pearl Earl are at the Hi Hat with Caitlin Dee & Moonily, The Darbies, Superunloaded, First Fire are at the Redwood.

On Wednesday 22nd, Lil Pump & Lil Skies are at the Novo, Mavis & Friends: Celebrating 80 Years of Mavis Staples is happening at the Theatre at Ace Hotel with Benjamin Booker, Griffin Goldsmith, Jason Isbell, Jerry Harrison, Joe Henry, Lucius, M. Ward, Phoebe Bridgers, Son Little, Taylor Goldsmith, Trombone Shorty, The War and Treaty and many more, Idles are at the Fonda Theatre with special guest Fontaines D.C., Black Label Society are at the El Rey Theatre with Conan & The Atomic Bitchwax, Julia Jacklin is at the Roxy with Black Belt Eagle Scout, Skeleton Witch are at the Teragram Ballroom with Soft Kill, Wiegedood, portrayal of guilt, Ocean Alley are at The Echo with The Morning Yells, Listener, Birds In Row are at Bootleg Theater with Quentin Sauvé, Kevin Garrett is at The Troubadour with Minke, Molly Tuttle is at Amoeba Music, Jared & The Mill are at the Moroccan Lounge with Wildermiss, Chief White Lightning, Josh Arbour is at the Satellite with Nick Leng, Colyer, Dachambo, TV Broken 3rd Eye Open, Intrepid Followers are at the Hi Hat, Los Fauna, Miracle Wave, Sound Station, Dyed Hydes are at the Redwood.

On Thursday 23rd, Wallows are at the Fonda Theatre with Slow Hollows, Black Label Society are at the El Rey Theatre with The Atomic Bitchwax, Conan, Julia Jacklin is at the Teragram Ballroom with Black Belt Eagle Scout, Killing Joke are at The Roxy with The Pink Slips, Mahalia is at The Masonic Lodge at Hollywood Forever Cemetery, Jony J is at the Echoplex, The Aggrolites are at the Satellite with The Capsouls, ANGEL CITY REVIEW with Jackie Mendez and Xavier Lynch, HYPNOTHESIS: Hyphy Beats, West Coast Bass, & Jazz From Outer Space is happening at the Echo with Penthouse Penthouse, Linafornia, Courteous Tone, Great Dane’s “Respect: Self” EP Release Party, Hapa, Tsuruda, Woolymammoth, Knife Knights are at Bootleg Theater with Lando Chill, The Teskey Brothers are at The Troubadour with Katie Pruitt, BELLSAINT are at the Moroccan Lounge with FLAVIA, Loud Forest, Olivia Grace, Candace are at The Hi Hat with Storefront Church and Bill Baird!, Sonny and the Sunsets are at Zebulon with Kelley Stolz, Intelligence, TIMETABLE VOL. 2 RELEASE PARTY is happening at the Lodge Room with NOSAJ THING, 4THSEX, HOLODEC, D TIBERIO, DJ DOBERMAN, DAMAR DAVIS, Turbulent Hearts, Kim and The Created, Mean Heat, Stars At Night  are at the Redwood.

On Friday 24th, TOMORROW X TOGETHER are at The Novo, Wallows are at the Fonda Theatre with Slow Hollows, The Lemonheads are at the Teragram Ballroom with The Restless Age, Dread Mar-I is at The Regent Theater with Onechot, Falling In Reverse is at the Wiltern, Emotional Oranges are at the El Rey Theatre, Koe Wetzel is at The Troubadour with Sam Morrow, Pink $ock is at The Echo with Emmett Kai, HOTT MT, Belly Belt, The Expanders, Quinto Sol are at the Echoplex, El Gran Festival de Musica Cubana is happening at The Greek Theatre with Juan De Marcos, Eliades Ochoa y Cuarteto Patria, Barbarito Torres y su Piquete Cubano, Jesus Aguaje Ramos y su Orquesta Buena Vista, Los Van Van, Ruth (Lauren Ruth Ward) is at The Love Song, The Bright Light Social Hour, SWIMM are at the Moroccan Lounge with Goldensuns, Slime Girls, River Gods. love under the sun, GUPPY are at The Hi Hat, Klaus Johann Grobe are at The Lodge Room with VINYL WILLIAMS, LITRONIX, Well Hung Heart, Mr. Clit and the Pink Cigarettes, Del Toros are at the Redwood.

On Saturday 25th, WAR & KC AND THE SUNSHINE are at The Greek Theatre with Tierra, El Chicano, IAMX is at The Belasco Theater, Wisin y Yandel are at The Forum, Hunter Hayes is at the Fonda Theatre with Levi Hummon, Supersuckers are at The Echo with Speedealer, Teenage Bottlerocket are at the Troubadour with the Nerf Herder, Tightwire, Sylar are at the Roxy with Cane Hill, Varials, Bloodline, Paige Stark is at the Bootleg Theater with Allie Crow Buckley, Lael Neale, Bridey Elliot, The Bright Light Social Hour, SWIMM are at the Moroccan Lounge with Fayroy, Purple Bite’s Almost Summer Memorial Day Party featuring Georgie Kay, Molly Moore, DYLLAN, Magic Bronson is happening at The Hi Hat, The Richmond Sluts, FAZ WALTZ, The Crazy Squeeze, Killer Hearts are at the Redwood.

On Sunday 26th, New Kids On The Block are at the Hollywood Bowl with Salt N Pepa, Naughty By Nature, Tiffany, Debbie Gibson, Jay Electronica is at the Troubadour with Tre Capital, The Avengers, The Dils and The Alley Cats + many special guests (A Celebration of the Life of Jimmy Wilsey) are at the Echoplex, Crime in Stereo are at The Roxy with Elder Brother. City Ghost, Hyde are at 1720, Where is Your Mind: A Benefit for Painted Brain is happening with Dankrupt, Glacial Palms, Beau LePaige and the Family Band, & Special Guests, Nana Pancha, Raskahuele are at The Regent Theater, Sumo Princess are at the Bootleg with Poppy Jean Crawford, The Eagle Rock Gospel Singers are at The Hi Hat with BALTO and Malachi Henry & The Lights, Boots Electric, Millionette, Kaiser are at the Redwood.