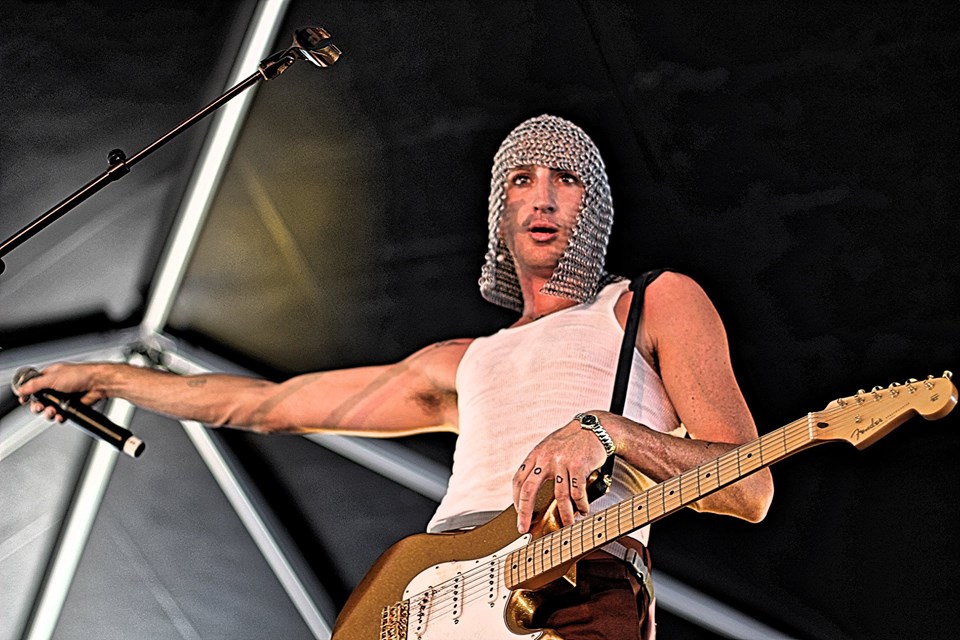 On Monday 24th, Santana, The Doobie Brothers are at the Hollywood Bowl, Kim Petras is at the Fonda Theatre with Mazurbate, It’s A School Night! has Miss June, BENE, Tate Tucker, Colyer at Bardot, Adam Levy & Anna Vogelzang are at the Bootleg with Sara Watkins, A.O. Gerber, & Abby Litman, Ivy Sole, Blossom, Parisalexa are at the Echoplex, Brass Box are at The Echo with THIEF, Foie Gras, Bob Villain, Lee Brown is at the Moroccan Lounge with Heather Cole, Holander, Sleeplust are at the Satellite with LeyeT, Troi Irons, Sub-Radio, Milk, All Things Blue are at The Hi Hat, CFM are at Zebulon with special guests, Anathemma, Ravenous Wolves, Meridian, Schizofrenic are at the Redwood.

On Tuesday 25th, Khalid, Clairo are at the Staples Center, Dido, Jack Savoretti are at the Wiltern, Hootie & The Blowfish are at the Hollywood Bowl, Jordan Rakei is at The Masonic Lodge at Hollywood Forever Cemetery, Kim Petras is at the Fonda Theatre with Alex Chapman, FREDDIE GIBBS, MADLIB are at The Roxy, Indigo Girls, Chastity Brown are at the Teragram Ballroom, Ariel Beesley, Sedona, R E L, HU:MAN are at The Echo, Kirin J Callinan is at The Lodge Room with Rinse & Repeat, Bonavega, Golden Daze, Winter are at the Moroccan Lounge with Marina Allen, Tacocat, The Paranoyds, Banny Grove are at the Bootleg Theater, Somme is at the Satellite with Devon Baldwin, ZOLA, The Regal Peaches are at the Hi Hat with The No. 44, dragsterbarbie, We Found New Music Night has Peter Fenn, Valntn, Nasaya, Darius Coleman at Madame Siam, Reel To Reel: The Black Godfather is happening at The Grammy Museum, Fazer, Liberate Elemental Forces, Rocco Deluca are at Zebulon, Far Beyond Hostile, Dante HH, Modules are at the Redwood.

On Wednesday 26th, Khalid, Clairo are at the Staples Center, The Raconteurs are at Amoeba Music, Rooney are at The Lodge Room, Houses, Gothic Tropic are at The Troubadour, Aly & AJ are at the Fonda Theatre with Armors & Jena Rose,  Remo Drive are at the Teragram Ballroom with Slow Pulp, Mindi Abair and the Boneshakers are at The Grammy Museum, OBN Jay is at The Echo, Dub Club with Arise Roots is happening at the Echoplex, Raja Kumari is at the Moroccan Lounge with VINCINT, Samia, Charlie Hickey are at the Bootleg with Bunny Lowe, Therese Curatolo is at the Satellite with Michael Mancuso, Ryan Nealon, Airplane Mode are at The Hi Hat with Low Leaf, Zeroh, The Gaslamp Killer, Rain Phoenix, Devendra Banhart (DJ Set) are at Zebulon, Dr. Maddvibe & the Missin’ Links feat. Angelo Moore (Fishbone), Rebel Rampage, Johnny Stranger, Ted Marengus are at the Redwood.

On Thursday 27h, LANY are at the Greek Theatre with Sasha Sloan & RIAH, Judas Priest are at the Microsoft Theater with Uriah Heep, Aly & AJ are at the Fonda Theatre with Armors, Jena Rose, Priests, Sons of an Illustrious Father, Polyplastic are at the Teragram Ballroom, Sure Sure are at The Troubadour with Moontower, Charly Bliss, Emily Reo are at the Lodge Room, Jesse Colin Young is at The Grammy Museum, Ginger Root is at the Moroccan Lounge with Mamalarky, Sloppy Jane are at the Bootleg with Poppy Jean Crawford, Pageants, Deltaphonic are at the Satellite with Temme Scott, Hannah Connolly, Michael Kaiser, South Central Skankers, Roncovacoco, The Meddlers are at Levitt Pavilion MacArthur Park, Shelley Burgon, Dolphin Midwives, Saloli are at Zebulon, Jesika von Rabbit is at the Redwood with Boots Electric, Flames Of Durga, Blackbird Days.

On Friday 28th, Empire of the Sun are at the Fonda Theatre, David Gray, Gaby Moreno are at the Orpheum Theatre, LANY,  Sasha Sloan are at the Shrine Expo Hall, NAV, KILLY are at the Hollywood Palladium, Okkervil River, Christian Lee Hutson are at The Troubadour, Dio are at the Wiltern, Mini Mansions are at the Teragram Ballroom with Alexandra Savoir, Lou Doillon is at The Lodge Room, DANGER COLLECTIVE RECORDS FIVE YEAR ANNIVERSARY is happening at the Bootleg with Boyo, Brutus VIII, Current Joys, Dirt Buyer, French Vanilla, Gap Girls, Momma, Model/Actriz, P.H.F., Roidz, Slow Hollows, Smokey Brights are at the Satellite with Cardioid, J GRGRY, FIGFest with STRFKR, De Lux, Daniel T is at  FIGat7th, NIGHT BEATS are at the Roxy with Kate Clover and Hallow Gallows, Lisa “Suckdog” Carver of Suckdog and Rollerderby is happening at Tangier (Located Inside the Hotel Figueroa) with DYNASTY HANDBAG, Trapgirl, Hardcore Tina Beauty and the Beast Opera, Jeff Schneider (of Arab on Radar), Chase Atlantic are at The Regent Theater with Lauren Sanderson, The Shakes, Fever Joy, Badtalkers, The Midnight Club are at The Echo, Badass Bands has a party at The Hi Hat withAndy Clockwise, Stars At Night, Zach Kibbee, The Gooms, Lido Pimienta, Delsonido, Subsuelo are at Levitt Pavilion MacArthur Park, Friends With Benefits, The Tracks, Snuff Redux, Cigarette Bums are at El Cid, Puce Mary, Damion Romero, Kali Malone are at Zebulon.

On Saturday 29th, The Misfits, Anti-Nowhere League, Cro-Mags, The Distillers, Rise Against are at Banc of California Stadium, Anderson .Paak, Earl Sweatshirt, Thundercat are at The Forum, LANE 8 is at Grand Park LA with Ben Böhmer, Coheed and Cambria, Mastodon, Every Time I Die are at the Greek Theatre, Empire of the Sun are at the Fonda Theatre, Yaysayer are at the Teragram Ballroom with Steady Holiday, Slayyyter is at The Echo with Robokid, Boy Sim, Josh Ritter & the Royal City Band are at The Theatre at Ace Hotel with Penny & Sparrow, NEW POLITICS are at The Roxy with Half The Animal, The Rural Alberta Advantage are at the Moroccan Lounge with Stevie Redstone, Canal Street, Jake Clark are at The Troubadour, Sinkane are at the Bootleg, Camilo Sesto is at the Microsoft Theater, KillRadio are at The Hi Hat with The Absurd, Frontline Brigade, The Gitas, High Life, Flesh Blood and Bones, the Adjacents are at the Redwood and later Double Cobra (featuring members from Chris Shiflett’s Dead Peasants & Scott Weiland’s Wildabouts), Analog Party, Neverland Ranch Davidians are at the Redwood.

On Sunday 30th, Empire of the Sun are at the Fonda Theatre, Machine Gun Kelly is at the Wiltern, THE TECHNICOLORS are at the Roxy with Palm Springsteen and King Shelter, Grand Ole Echo is happening at the Echo with Sie Sie Benhoff, Earth Girl Helen Brown, Shannon Lay, Molly Hamner, Maesa Pullman, ARCTIC FLOWERS, MYSTIC PRIESTESS, THE PRESENT MOMENT, DETH CRUX are at the Echoplex, KIDEYES are at the Bootleg with Molly Moore, John S. Hall, LoveyDove , Frieda’s Roses, Where’s Agatha are at the Hi Hat, Jazz Is Dead: Marcos Valle is at The Lodge Room , and later Jazz Is Dead: Marcos Valle is at The Lodge Room, Bart & The Bedazzled, Tara Jane O’Neil, Marjorie Faire. are at Zebulon, The Wyldewood Green, The Stradas, Love Fuck City, red roulette are at the Redwood.