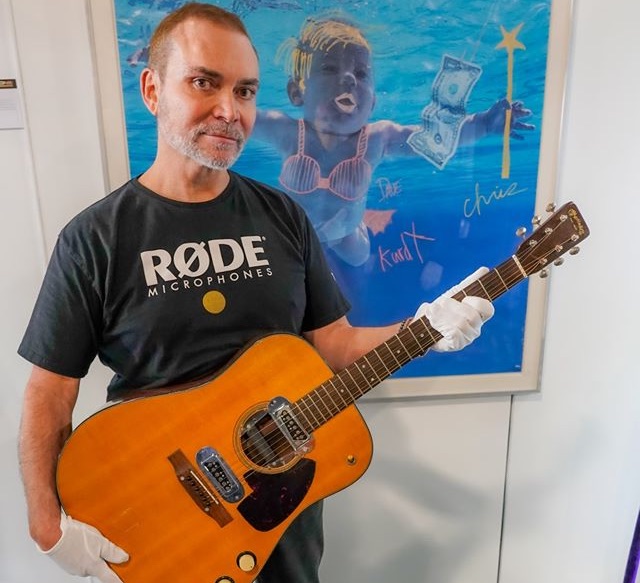 Kurt Cobain’s famous guitar, the one he played during the famous Nirvana’s MTV Unplugged, was sold today for $6M! You read it correctly, it was announced by Julien’s Auctions just a few hours ago, during a ‘Music Icons’ auction taking place in Beverly Hills, Peter Freedman, the founder of RØDE Microphones, just won at auction Cobain’s 1959 Martin D-18E for the exact amount of $6,000,010.

This is a world record. For comparison, the Auctions’ Music Icons event also featured Prince’s ‘Blue Angel’ Cloud 2 electric guitar, and it was sold for a winning bid of $563,000.

According to musician Mary Lou Lord who knew Kurt Cobain very well, the guitar was probably donated to the Nirvana frontman, since it was a ‘bastard E’ Martin that no one wanted. The green mohair cardigan that Cobain was wearing the same day had already been sold at Julien’s Auctions for $334,000 last year.

$6M is an astounding sum of money for a guitar, this is interesting to point out that this is the same guitar that is still in the middle of the lawsuit between Frances Bean Cobain’s ex-husband, Isaiah Silva, and Courtney Love. According to the lawsuit, Sam Lutfi (Love’s ex-manager) and two other defendants attempt to kidnap Silva and threatened him to sign a divorce agreement that would give back the guitar to Cobain and Love.

Since Frances Cobain gave Silva the guitar when they were married, I presume the guitar was still in Silva’s possession till this auction.

A least, Peter Freedman will have very good use of his new treasure. This is what was posted on RØDE website:

‘When I heard that this iconic guitar was up for auction, I immediately knew it was a once-in-a-lifetime opportunity to secure it and use it as a vehicle to spotlight the struggles that those in the performing arts are facing and have always faced.

The global arts industry has been shattered by the impact of COVID-19, with musicians and artists being amongst the most affected. The last few months were the straw that broke the camel’s back, and for many in the arts have brought forth the harsh reality that they work in an industry for which there is little support in times of need.

For most, access to financial and health services – particularly mental health services – is very limited. While many industries are gradually returning to normal, it’s going to take a long time before this industry can begin functioning as it was. The toll this has taken and will continue to take is enormous and requires more than just lip service. It requires action now, and I am a man of action.

The arts, and organizations that support the arts, are remarkably undervalued and underfunded by many governments around the world, considering their cultural and economic importance. I saw buying this guitar as an opportunity to not only share it with music fans, but to do so in a way that raises awareness for the struggles that musicians and artists face every day, and lobby governments for change.’

Mr. Freedman plans to display the guitar in a worldwide tour of exhibitions to be held in distinguished galleries and art spaces, with all proceeds (including the guitar) going to the performing arts. Kurt Cobain would have been very proud.