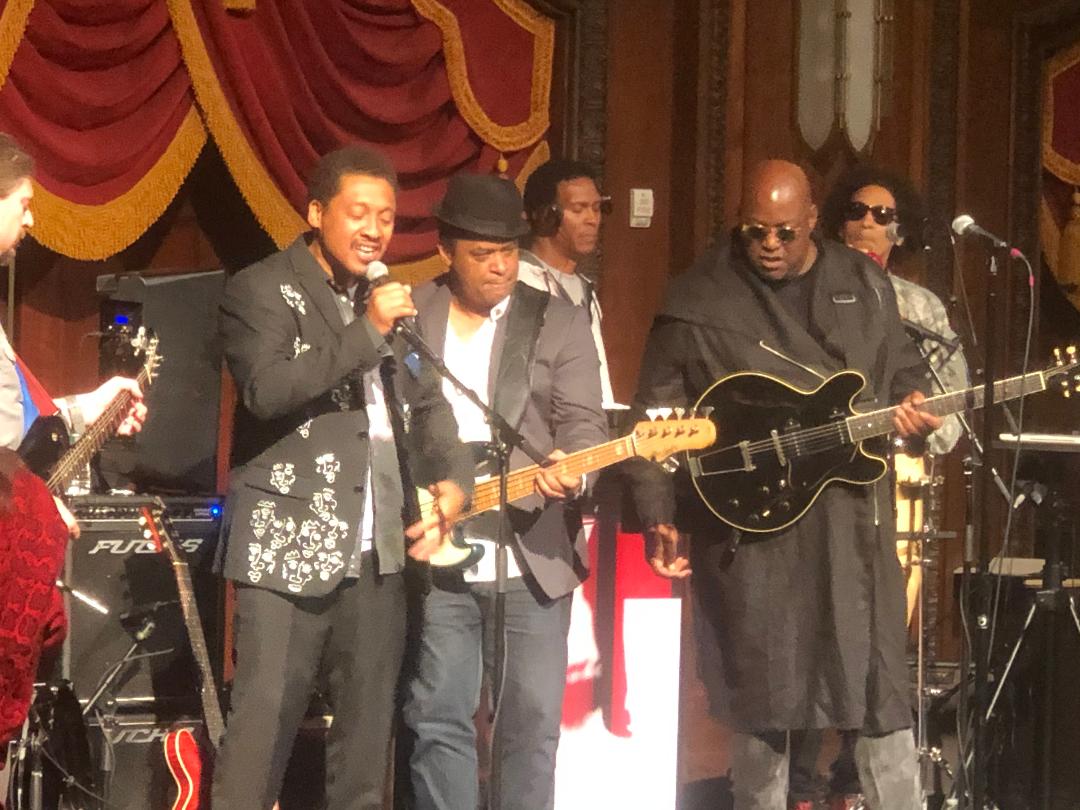 Some sets play better in your memory than they did at the time. In June 2013, I watched spoken word artist Marla Mase dismantle  Arlene’s Grocery (here), an evening I admire more now than then. Six years after the fact, what I remember is Marla , crouching behind a chair snarling like a lion and thinking: that is art as entertainment as self-revelation. Last night, actor, playwright, and spoken word artist Khalil Kane had a similar moment during his headlining set at Kings Theatre. “Moor” takes a pun and straps it into a No New York post-punk instrumental by the True Groove Allstars. I was discussing Kain with a friend who suggested that the charismatic leading man might work against his enraged political misgivings, that’s true, but on “Moor” he drops his star power to Jim Crow himself out of America on a raging sound that crackled through Kings Theatre, with the band chanting in the background, he defined skin pigmentation as institutionalized bullshit.

The evening began with Keith Shocklee performing a long DJ set that seemed more audience invested than his “The Bitter End” disco deconstruction back in May, he seemed to be riding a late 1960s early 1970s vibe with some old school Sly And The Family Stone. Also, when you have a DJ as uniquely gifted as Shocklee, you want to hear it and hear it more, I wish the sound had been  louder -even if it meant drowning out the audience’s conversations.

The DJ warm up segued into Tomas Doncker as he lead his band through a contracted version of the set he has been performing all summer: two songs off Black Magnolia Volume One, two off Big Apple Blues (including his freshly arranged new single, a  hardcore, banging take on “Fun City,”), and a Mos Def cover. “The White Night” Artur Uronen was back in town from Helsinki, and his steel guitar solo during “The New Day” should be patented. Doncker as an MC has no fear of demanding a response to his performance and is well given to audience participation, even something as axiomatic as waving your hands in the air or as compellingly singular as pretending to have his writing partner poet laureate  Yusef Komunyakaa on the cell before going into the reading portion of “Post Modern Jive,” finds Doncker breaking the fourth wall to smithereens. “Post Modern Jive”  featured  a masterful Kevin Jenkins back on bass -there are no keyboards at all this night. It takes us to “Umi Says” -Mos Def’s ode to his mother. Doncker takes the hook “shine your light on the world” and explores it on stage, it’s a jam out moment in the song and it is improved now with latest Allstar Kismet’s singing. Kismet sounds like Kate Pierson, her words ineluctable and yet soaring.

The evening was a record release party for Kain’s new EP Lamb To The Slaughter, released today, and Kain took the moment with the same command he has on screen, he is, simply, mesmerizing, with an intensity that he turns on and off. From the opening line, “excuse me, yes you, all of you here at the front” to “Kiss my ass, don’t hesitate,” there is an anger to the performance manifested in an almost disembodied disclaimer, like Tourette syndrome, with Kain blurting “Impeach” randomly. Several years ago I met Kain at Pianos on Ludlow Street, and as we spoke I saw women hovering towards us, surrounding him, before pushing me out of the way. In a not dissimilar manner, Kain seemed to be pushing Kain the star out of the way through the half hour set, making room for Kain the “I’m not a poet and I’m not a rapper” to emerge as a social protester. “Lil Ducky” is the POTUS as KKK member middle tract, “Moor” a shout of self and social rehabilitation, and by the end of the evening, the title track “Lambs To The Slaughter” comes right off its hinges and the paranoid screams echoed through Kings Theatre condemning the USA as social abattoir in the Post-Obama era.