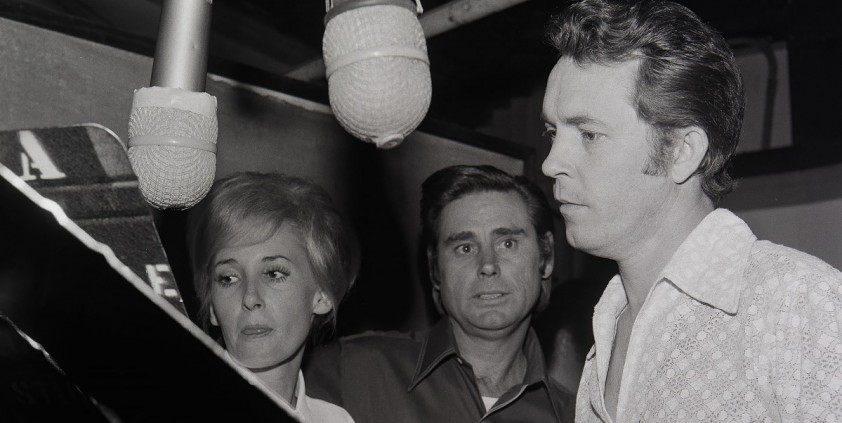 During this episode, it feels like the wheels have completely fallen off of his project. If one did not know that this was directed under the auspices of Mr. American Documentarian Extraordinaire Ken Burns, one might think that a group of drunken Gibbon monkeys quickly threw this together, rushing through this project to get to their annual popcorn ball bling decoration and juggling contest.

Take, for example, the opening sequence about bluegrass music. We are told that “by the late 1960s, bluegrass and string bands had all but disappeared from country radio stations.” We are shown footage of a sparsely attended bluegrass festival. As the timeline states, this episode putatively begins in 1968. We are then told that the folk revival created new fans of traditional country music and the Lost City Ramblers are cited as an important act in that movement. The documentary does not mention that the Ramblers started recording in 1958. We are told about the significance of the Ramblers bringing Maybelle Carter to the Newport Folk Festival. The documentary does not mention that that happened in 1963. We are then told of a sequential bluegrass renaissance that occurred via festivals in rural communities, cities, and college campuses. Reading between the lines, the documentary states that the decline of bluegrass music and its resurrection occurred simultaneously.

Almost fifteen years into his recording career, we are finally introduced to George Jones, arguably the greatest singer in the history of the genre. The delay, of course, is so that he can be paired with Tammy Wynette for story line reasons. Instead of examining his music and impact in a comprehensive manner, there is an extended hagiography on Kris Kristofferson, who had about five years as a top notch songwriter and was correct in his assessment that he sang like a frog. Once again, there are several segments on Johnny Cash and it is clear that the producers want The Man in Black to be the narrative glue for the series. However, if feels ridiculously overdone. At any second, one expects narrator Peter Coyote to declare in his stentorian manner, “On August 15th of 1971, no longer addicted to amphetamines, Johnny Cash devoured two bologna sandwiches,” followed by a quick cut to a beaming Rosanne Cash saying, “Daddy always…(dramatic pause)…masticated with great aplomb.”

There are several segments on rock bands/artists recording in Nashville to include Dylan, The Byrds, and the Nitty Gritty Dirt Band, all providing theoretical cross genre legitimacy. Glen Campbell is disposed of in less than a minute, mainly discussed as a television host. He and Webb Pierce can console each other on the sidelines. In one ironic segment, we learn that Charlie Daniels accompanied Lester Scruggs to protest the Vietnam War. Daniels must hate that this footage exists, as his goal since the late 1970s has been to make Ted Nugent look like a comparative flamboyant Quaker in terms of image.

When discussing Merle Haggard’s anti-war protestor hit “Okie from Muskogee,” historian Bill Malone correctly noted that the song was constructed as a joke, but then the audience took it as serious discourse. I wonder if that ever applies to filmmaking.