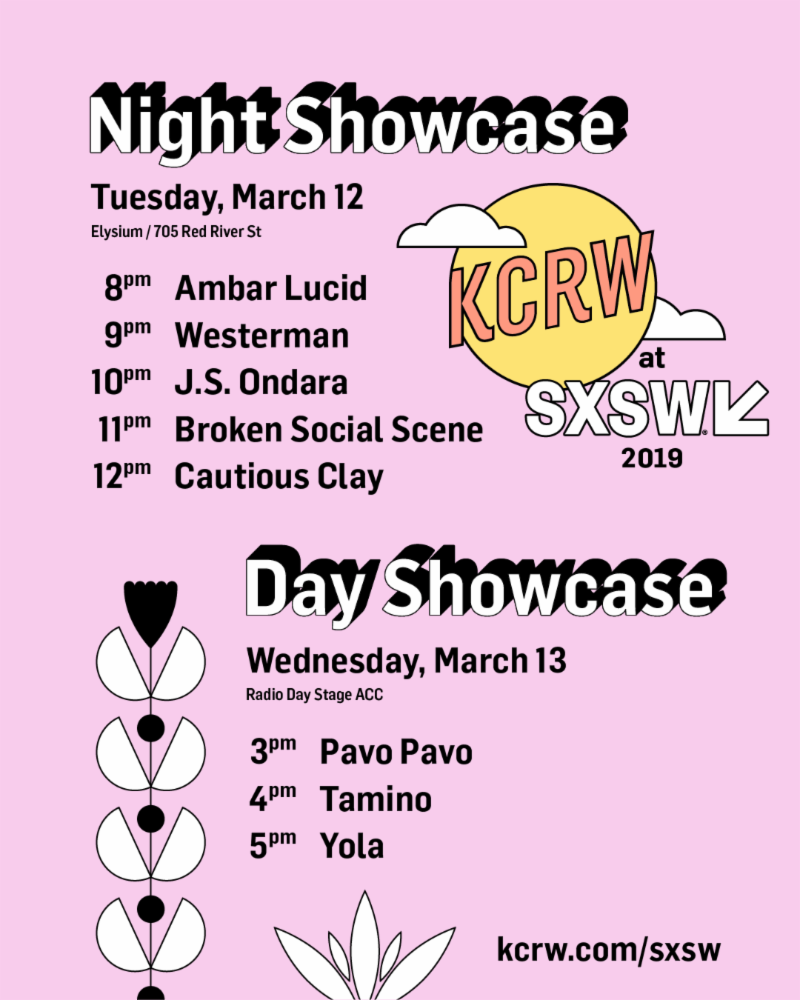 For those of you heading to SXSW, be sure to check out KCRW’s two official showcases– Tuesday, March 12, at Elysium, and Wednesday, March 13, at the Radio Day Stage. Both showcases are open to anyone with a festival badge or wristband (no RSVP required).

The KCRW Music Blog will have preview coverage of bands to keep an eye on, as well as photos, videos and more throughout the fest. Stay up to the minute on Instagram – @mbekcrw – for more exclusive SXSW content.

New Jersey’s Ambar Lucid is hailed for her bedroom pop sounds, and incorporating bilingual lyrics into her songs. Without having released a proper LP or EP, the 18 year-old is quickly developing a fan base with her lo fi videos and organic songs that explore love and coming of age. I’m excited to have her on board during our KCRW showcase.

Based in London, Westerman (an artist who forgoes a first name) has taken us at KCRW quite by surprise over the last year. Having grown up in a house with Neil Young and Nick Drake playing on the stereo, his early work on acoustic guitar has the featherlike feel of those artists. (Westerman also cites Kings of Leon as a major influence.)  He didn’t pick up the guitar until he was sixteen, and prior to that he spent his time studying and performing choral music. Soon, he teamed up with producer, Bullion (who also eschews a first name), and that’s where the synths came creeping into his work. All of this makes for a gorgeous, airy and almost classical-sounding kind of music that continues to captivate us. Westerman is certainly a contender for Best New Artist of the year.

Growing up in Nairobi, Kenya, J.S. Ondara first came across the music of Bob Dylan through the Guns and Roses cover of “Knockin’ on Heaven’s Door.” At first he thought it was a G’n’R original, but once he realized who wrote the song, he became obsessed. While still in his teens, he pledged to move to Minneapolis to retrace the steps of his hero, a move that gave him great inspiration. His spellbinding voice and his unique take on American folk music endeared him to the local music scene, and led to heavy airplay on The Current, the famed new music outlet on Minnesota Public Radio.

Among the busy currents of new bands making the trek to Austin, KCRW is thrilled to present Indie Rock veterans Broken Social Scene at our official SXSW showcase this year. The dynamic Canadian collective has been a beacon for quality over the last two decades, and their latest EP Let’s Try The After Vol. 1 only adds to their stellar repertoire. The nine-piece band will surely have Elysium nightclub heaving on Tuesday night, for one of the music festivals’ first not-to-be missed engagements.

In 2018, Cautious Clay released an identity-searching and incredibly soulful EP Blood Type. It was the culmination of finally deciding to quit his day job and concentrate full-time on making music. Cautious, aka, Joshua Karpeh, had previously tasted an ephemeral spotlight in 2015 as his remix of Billie Eilish’s “Ocean Eyes,” had been handpicked by the band to be included in their remix package. But the success of his self-released EP (which has 20 million plus streams) has now fixed a giant spotlight on the Cleveland-born, via Brooklyn musician. Cautious Clay is one of the most sought after, up & coming DIY acts, and his downbeat, sultry sounds will be the perfect close to another fantastically curated KCRW showcase at SXSW!

It’s evident that Pavo Pavo, the recording project of Oliver Hill and Eliza Bagg, spend a good amount of time mixing the sonic brilliance on their latest album, Mystery Tour, released just last month. The duo draw inspiration from the challenges of relationships (Oliver and Eliza separated after being together for six years) and somehow manage to convey emotion in every kick, snare and guitar lick.

Born and raised in Antwerp, Tamino captivates with a three octave range. Named for the hero in Mozart’s The Magic Flute who is given a flute that can turn sorrow into joy, he actually comes from Egyptian entertainment royalty (his grandfather was Moharam Fouad, an actor and singer during the Golden Age of Egyptian cinema). One day while sorting through family heirlooms at his grandmother’s house, he came across his grandfather’s Resonator guitar. Inspiration hit immediately and within a month he was writing songs on the instrument. SXSW 2019 will be the first opportunity to catch this rising star perform live in North America.

Yola’s debut album, Walk Through Fire, produced by Dan Auerbach, is a genre-bending combination of country and soul from one of the most powerful emerging British voices in music today. After spending years backing up others, working on tracks from Katy Perry to Massive Attack, she finally came to the attention of Auerbach (The Black Keys) after he saw a video of her performing in Nashville, which has now become a second home to her. Coverage from NPR, Rolling Stone Country, the Wall Street Journal, Paste, and Stereogumall praise Yola, comparing her to a diverse range of artists from the Staples Singers to Dolly Parton. Check out her live prowess at SXSW before she hits the Hollywood Bowl stage this summer as part of KCRW’s World Festival.

KCRW creates and curates a unique mix of content centered around music discovery, NPR news, cultural exploration and informed public affairs. We are driven by the spirit of LA and deliver in innovative ways – on the radio, digitally and in person – to diverse, curious communities around the corner and around the world. A community service of Santa Monica College, KCRW can be found on the air in L.A., Santa Barbara, Ventura, Mojave, Palm Springs, San Luis Obispo, and Berlin, Germany, and worldwide via the KCRW-developed smart phone app, or online at kcrw.com.