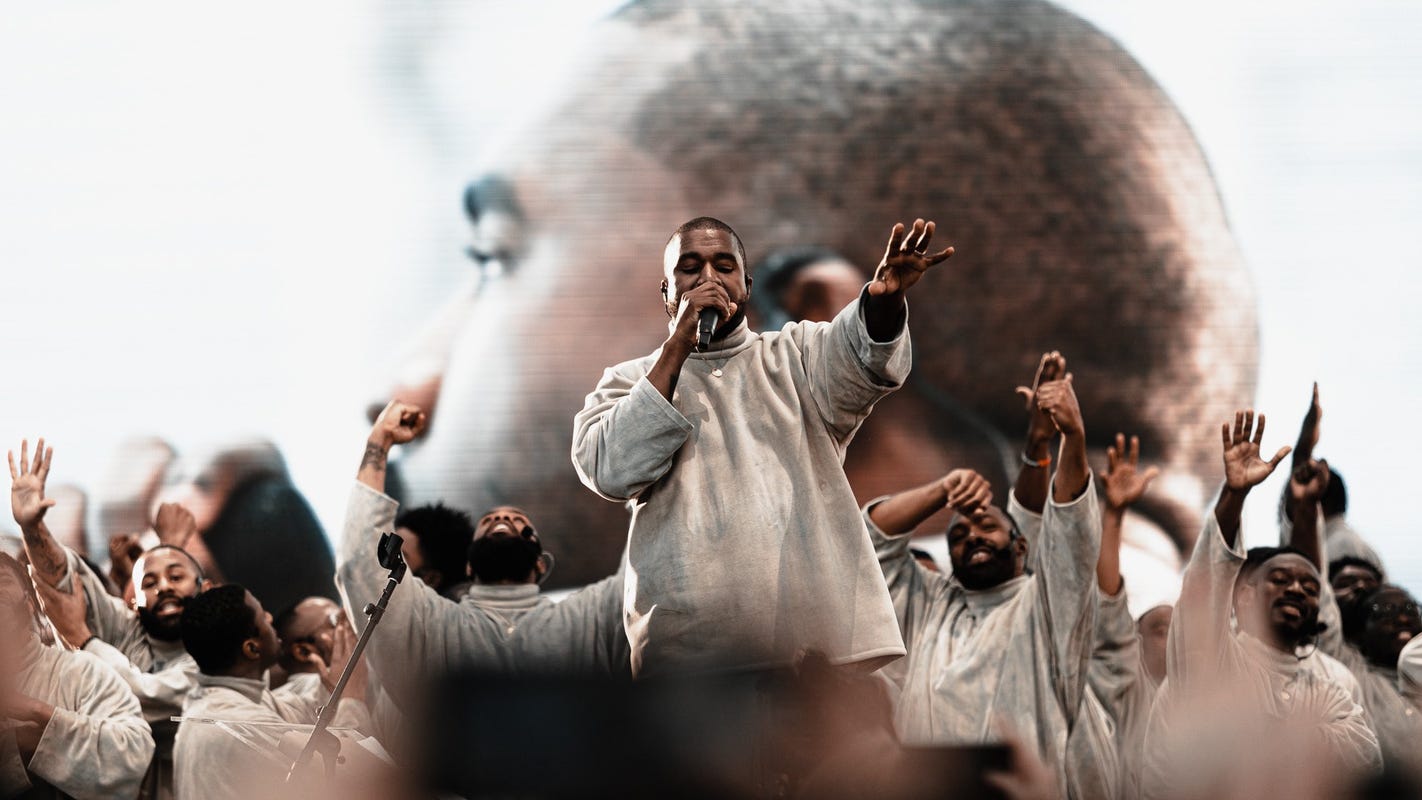 If you are a fan of Kanye West, you know he has become a born again Christian, and last Sunday he was even performing at an evangelical rally in Tempe Arizona, Awaken 2020 at Sun Devil Stadium,… what a name… The show, which was billed as ‘the first epic evangelical stadium event of the decade’, lasted 10 hours and Kanye played around 4-5 pm. He was obviously the big attraction of the prayer rally, even though he just performed for about 30 minutes.

It’s very clear that many people had only come to see Kanye and fled the place as soon as he was done, but if some websites have reported that tens of thousands of people were attending the rally, some photos show a different story with a somewhat sparse crowd. But it doesn’t matter, I watched a few videos, and it’s clear that Kanye brought his Sunday Service to Awaken 2020, in a pure devotion-for-God move, and everyone was even saying he looked and acted surprisingly humble for a narcissist. The man was talking about Jesus and was preaching as if he had been a priest.

Of course, the problem is not that Kanye is pursuing a very personal spiritual journey, the problem is that the crowd of speakers he was associated with, people like Guillermo Maldonado, the head pastor of Miami mega-church King Jesus International Ministry, who has said that having same-sex relationships is ’clearly prohibited by God’. According to the Insider, Maldonado wrote in his book ‘Spiritual Deliverance’ that homosexuality could be the result of ‘a generational curse, or even a demonic attack while in the womb’.

Although Lou Engle was taken off the lineup (due to public outcry), he was originally scheduled on the lineup when Kanye accepted to participate. Engle is another zealous opponent of abortion and LGBTQ rights, and is reported to have escalated the climate of anti-gay hatred in Uganda. Other speakers included Che Ahn (who is really not a better character) and Cindy Jacobs (who even thinks that gay marriage will lead to a civil war). Evangelical people are against homosexuality and gay rights? Not a surprise, but it may have come as a surprise to see Kanye West among such a crowd, since the rapper was a supporter of the most famous transgender woman in the world (father/mother-in law Caitlyn Jenner). Where is this Kanye who was asking the hip-hop community to stop using the words ‘gay’ and ‘fag’?

The old Kanye seemed much clever, at least he was questioning consumerism whereas he seems now to completely ignore the enormous money machine hiding behind Awaken 2020. The only funny thing is that Brian ‘Head’ Welch of Korn spoke just after Kanye’s performance, and screamed at everybody fleeing the venue.

“I started with this song and this whole time the devil had thought he had me. It’s like they would’ve blocked it or something if they knew we’d be here one day. This a Trojan horse if I ever seen one.” @kanyewest pic.twitter.com/yokvw51LEk

Another clip of Kanye’s speech at Awaken 2020 in Tempe, AZ today.