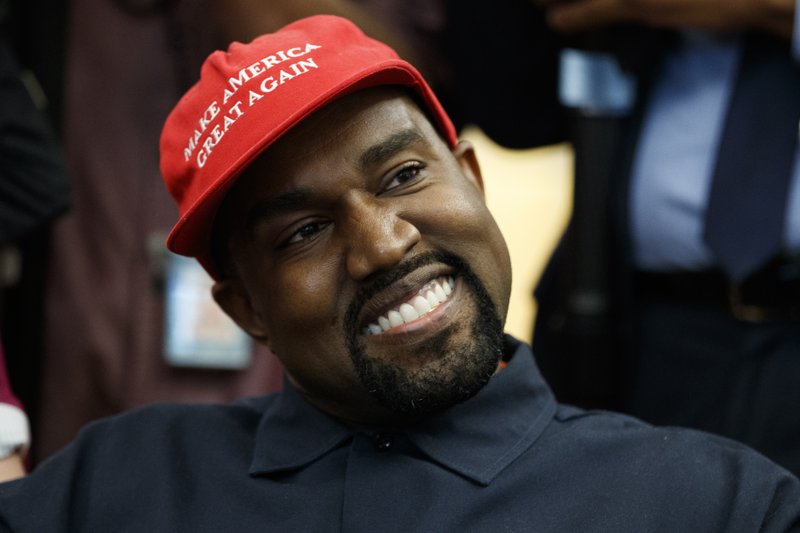 Since Kanye West has announced that he was running for president in the 2020 election via Twitter, he has been the center of plenty of attention, a dream situation for his narcissistic personality. Kanye is over Trump and is running the show for his own amusement.

Let’s be clear, his candidature might never happen as he has already passed the registration dates for a number of states such as North Carolina, Texas, New York, Maine, New Mexico, and Indiana, and would need to hurry up if he doesn’t want to miss the July deadlines for other states such as Colorado, Florida, Michigan, Missouri, Oklahoma, South Carolina, and West Virginia. In his own state of California, he has till August 7th to make the move, so barely a month.

Late registration indeed, but I am convinced Kanye sees that sign as a real prophecy.

The mind of Kanye West works in mysterious ways, and this has never been more obvious when reading the interview he accorded on Wednesday. Kanye West talked to Forbes magazine about a large range of subjects, and this ended up to be one of the most surrealistic rants I have ever read, by one of our most incongruous and eccentric minds, with an obvious absence of focus and a complete lack of interest for what other people might think. This may work marvelously for art, but it is extremely poorly adapted for the function he is aspiring to get.

First of all, there is a lot of God/Jesus talk, Kanye is a born-again Christian, and he drops a God reference at each sentence. In the parallel universe where Kanye is president, America has become a theocratic country, with a preacher from Cody, Wyoming as a vice-president. Forbes has done the research for us, Michelle Tidball runs her own online bible study program, says she never watched the news and has ‘various degrees in mental health and criminal justice.’ One of her biblical life coach 50-minute sessions will cost you $65 as a ‘suggested donation.’

As someone else said, believes have consequences, and these consequences would be disastrous if he ever had any high responsibility: Kanye is an anti-vaxxer and his declaration on a potential COVID-19 vaccine is the usual amalgam of conspiracy theories that have clogged many internet debates: ‘So when they say the way we’re going to fix Covid is with a vaccine, I’m extremely cautious. That’s the mark of the beast. They want to put chips inside of us, they want to do all kinds of things, to make it where we can’t cross the gates of heaven. I’m sorry when I say they, the humans that have the Devil inside them. And the sad thing is that, the saddest thing is that we all won’t make it to heaven, that there’ll be some of us that do not make it.’.
He is obviously a pro-lifer, rejecting the work of Planned Parenthoods which ‘have been placed inside cities by white supremacists to do the Devil’s work.’
And, of course, he would reinstall prayers at schools and basically everywhere else: ‘Reinstate in God’s state, in God’s country, the fear and love of God in all schools and organizations and you chill the fear and love of everything else, so that was a plan by the Devil to have our kids committing suicide at an all-time high by removing God to have murders in Chicago at an all-time high because the human beings working for the Devil removed God and prayer from the schools.’ Difficult to decide if it is a quote or a rap.

The beast, the devil, God, and the gates of heaven, Kanye lives in a biblical fantasy, and I am convinced these are not metaphors. The best proof? He thinks that ‘God appoints the president.’ When he really uses metaphors, he compares the design of Yeezy shoes to a possible policy, and this only works in his mind.

He would run under the Birthday Party – Nick Cave wants this back – with the comforting support of his reality star wife Kim Kardashian, and Elon Musk, who would be the head of the US space program.

Besides this, Kanye West, who has never voted once in his life, doesn’t have an ounce of a plan or any policies. But he would not use the word policy for the way he ‘would approach things.’ He admits not having ‘all of the pieces in the puzzle,’ not having ‘done enough research’ on taxes, and not having developed his foreign policy yet. However, at the image of his ex-friend Trump he would be ‘focused on protecting America, first, with our great military. Let’s focus on ourselves first.’

His vision of his presidency is grandiose, he would use the ‘framework of Wakanda’ (the fictional country in the Marvel Comics ‘Black Panthers’) as ‘the best explanation of what our design group is going to feel like in the White House.’ He would open the NBA ‘all the way back up from Nigeria to Nanchang,’ whatever this means.

And even when he talks about racial injustice, it’s very hard to understand why he is focusing on the young police officer afraid to lose his job rather than on the main subject?

Like a person with a severe case of ADHD, his mind cannot stay focus for a full paragraph, and he only makes a valid argument when he says he was threatened as a Black man because he said he was not voting for the democratic party.

The interview is certainly entertaining, you can see it as a long rant by bipolar, God-loving Kanye West, and sometimes his answers are coming straight from the satirical work of Sacha Baron Cohen/Ali G. However, the fact that he has a chance (even if ridiculously small) to be a presidential candidate in the 2020 election is absolutely insane.