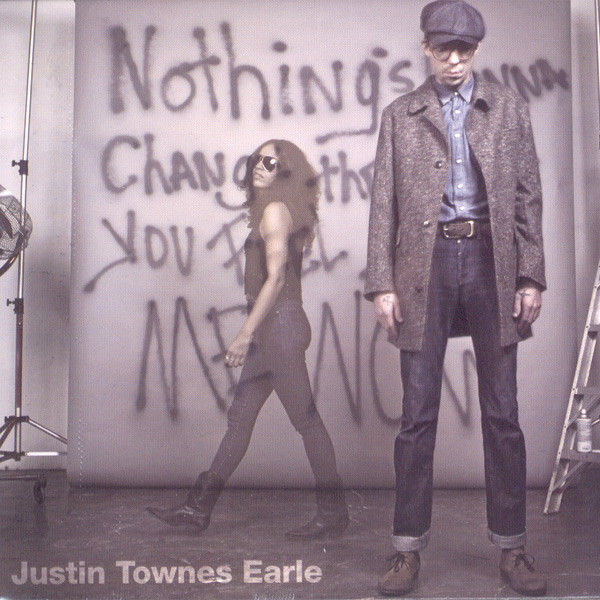 (Justin Townes Earle died on Sunday, this is re-posted as tribute -IL)

Justin Townes Earle fourth album is the best singer-songwriter confessional you’ve heard in years, in decades. Its directly antecedent isn’t country contemporaries like Eric Church, it is James Taylor in 1970. Like Sweet Baby James, Nothings Going To Change The Way You Feel About Me Now has a bad case of the shakes. It turns down the radio, turns up the window and drives from nyc to Memphis and back n a mood of deep melancholy.

But the level of songwriting is so strong, stronger than even Justin’s first album, and much much better than the following two, the worn out feelings are saved by fresh, wonderful melodies.

Justin has baggage: a famous father, a heartbroken mother, a hard drug addiction he is having problems shaking, and a disastrous love life with no “South Georgia Peach” to save him. And he is having nothing but headaches trying to move towards or away: he is moving in stasis. While his mother ignores it and his father is unreachable, the night overwhelms him in loneliness and the best the 30 year old Justin can manage is to double back to nyc.

It all shouldn’t work so well. Self-pitying druggies, right, even if ytheir dad’s are Steve Earle, shouldn’t be able to pull this off. But from the first song, the heartbreakingly beautiful “Am I That Lonely Tonight” with  ghostly horn punctuating the dream, to the condemning “Look The Other Way’ to the title tracks dead end to the I won’t promise the same thing won’t happen again “Won’t Be The Last Time” and the respite from the horrors rocker “Memphis In The Rain” through the astoundingly clear summation “Movin’ On”, there isn’t a bad moment, a duff note, it rings with the clarity of great truths shared.

Justin has an achy, Tennessee voice, like his daddy’s but Justin hits the notes better. And he uses his bands horns on song after song, till it is that sound that takes over the album: it’s like a rock and roll call, but there so he can play hide and sick all through the songs, The horns and piano boogie Memphis style a couple of times, but the tone is set by three devastating songs to open the album.two lost loves and one completely and pointedly lost. The ravages of drugs are devastating him (you don’t need to follow the tabs that much to be aware of this: his self-esteem shattered, his relationships shot to hell, and his voice a lonesome throb. These are mostly unhappy songs about unhappy things, and while we wait in vain  for a Southern Carolina Sugar Babe to save, whatever salvation there is comes from Justin trying to live with himself.

It is the addicts horror at the heart of the album: how guilty we feel about things that are so hard, sometimes impossible to control.

Justin spends the album climbing from the wreckage and, like all the greatest artist, changing the stench of self-loathing into the freedom of song. But he shouldn’t be so hard on himself From Keith to his father, from Billie Holiday to Miles Davis, drugs have gotten up on people. His namesake himself drank himself to death. The question is the ride, the getting there.

Nothings Gonna Change is almost slight in scope, it is a snapshot of Justin, but it is so right, the chugging rhythm of “Movin’ On”, the new wave underwater “Maria’, everything is so exactly the way it should be, that the big statement is internal: the importance is the importance of any fully realized moment in a life. And the horns. The horns are important. “I thought I’d be a better man”, Justin sings. If his point is to write great songs, he can’t be a better man than this.