Jon Butcher will be appearing at the SohoJohnny Presents “9/11 Let Me Help, Inc Music & Fashion Celebrity Benefit Gala Concert” on Saturday September 11, 2021. It is set to take place at Rumi Event Space located at 229 W. 28th Street (between 7th and 8th), in Manhattan. The Red Carpet begins at 5:00 PM EST and the main event starts at 7:00 PM sharp.

The event pays tribute to the 20 year anniversary of 9/11 with a barrage of fashion and music celebrating New York Fashion Week and a prelude to the opening of Broadway. The Let Me Help, Inc foundation founded by John “SohoJohnny” Pasquale strives to help people whose lives and livelihoods have been affected in some way by unforeseen circumstances or illness by raising money through the celebration of music, laughter and dance, and a portion of the proceeds will go to Let Me Help, Inc to benefit “Operation Warrior Shield”, an organization helping wounded veterans through the use of service dogs.

Grammy-nominated guitarist Jon Butcher is one of a select handful of influential recording artists who emerged from the legendary ’80s Boston music scene. MTV videos, hit songs, and incendiary live performances comprise the underpinnings of a rich music career that continues today. 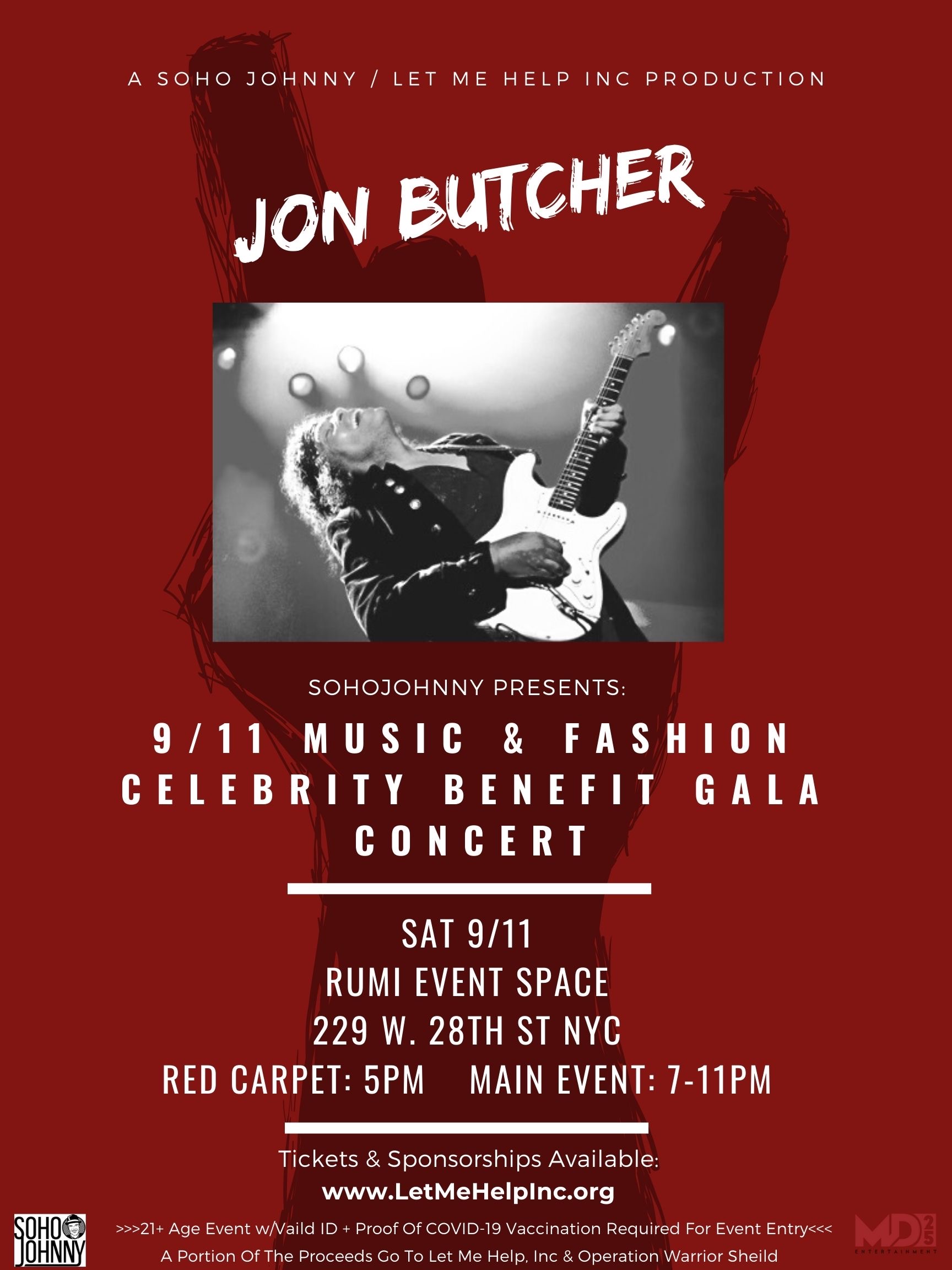 Jon Butcher’s signature sound features his powerful soul-infused vocals; and his guitar work reflects a skillful mix of Rock and R&B, Funk and Soul, Jazz and Americana, all of it focused through a prism built from the Blues. Jon’s powerhouse live performances with bandmates Chris Martin (bass), John Anthony (drums), Marty Richards (drums) are electrifying and not surprisingly playing to packed venues everywhere!

Jon has a new album titled “SPECIAL DAY,” that has been recently released. “SPECIAL DAY” is 10 brand new tracks and a continuation of what he calls ‘future blues’. Jon says, ” this is the best album I’ve ever done. Intense where it needs to be, trippy in all the good ways and ferocious performances by some of the best musicians in the world! The songs on this record reflect my headspace in ways I didn’t expect. As an artist you eventually write about who you are, whether you intend it or not. “SPECIAL DAY” has been an experience to make. And one I want to share.”

With a discography of more than 20 LP and CD releases to his credit, international acclaim and great reviews it should come as no surprise that writer Mike Mettler found Jon and will create the first authorized Jon Butcher biography. In the book

Jon tells a uniquely personal and surprising story through the eyes of a Pennsylvania-born, Alaska-raised and guitar infused black man in America. This will be a must read, more soon!

Get tickets on Eventbrite here:

The official website for SohoJohnny may be found at https://www.sohojohnny.com

The official website for Let Me Help, Inc may be found at https://letmehelpinc.org