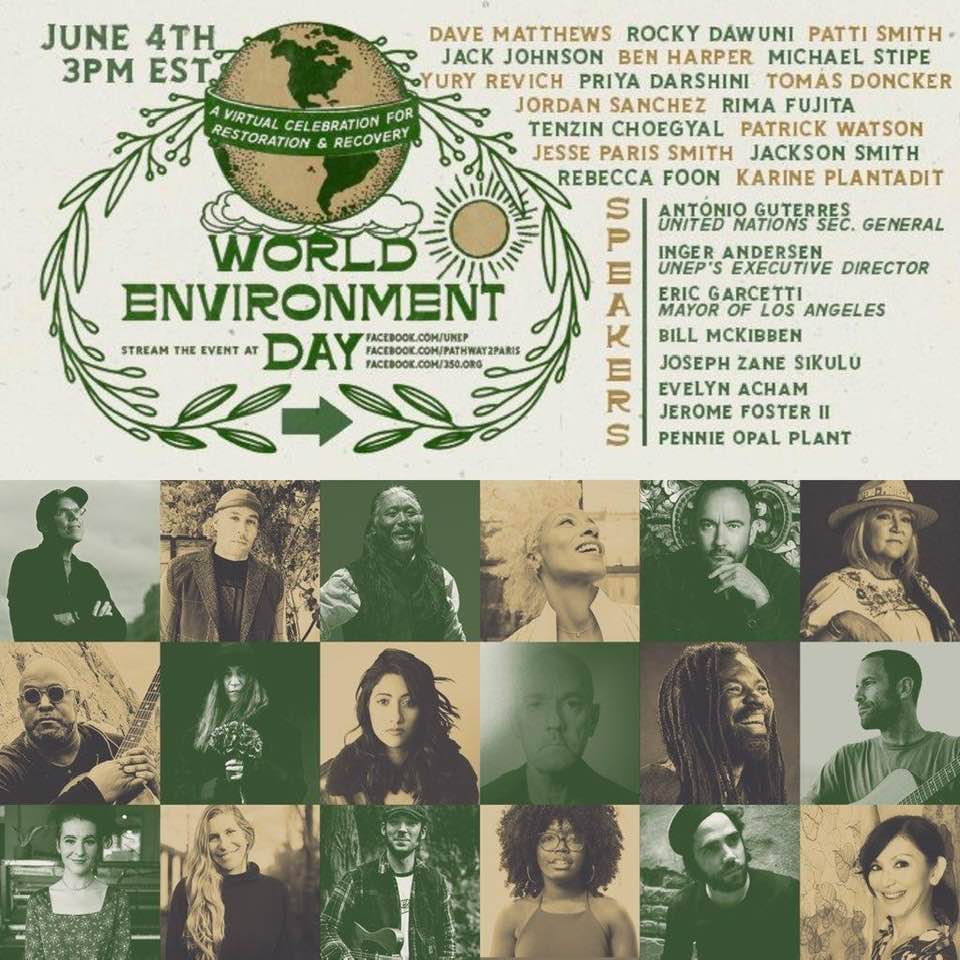 Jesse Smith is heading up a streaming celebration on June 4th at 3pm EST, for “World Environment Day”‘s “Restoration And Recovery” with some big names lending a hand, including her mother and brother, Dave Matthews, Ben Harper, Tomas Doncker, Michael Stipe (if he gets Patti to join him on “E-Bow The Letter” I will personally freak out), and more, including the Secretary General of the UN and the Mayor Of Los Angeles.

The thing about climate control is, appearances notwithstanding, it isn’t a case of we are all in this together, but more like they will be in it together, but we will probably have died by then, so it takes a love of mankind to fight for something that might kill everybody else in 50 years but makes zero difference to us, ourself, and me. Though, if we really want to save the planet we should probably breed ourselves out before we do any more damage.

How do you tie Hurricane Katrina to a rainy Sunday afternoon to Climate Change? Maybe twenty years ago, Al Gore had a Town Hall about climate control in New York and it snowed all day: that shouldn’t change a thing but it does, it mattered then and it is worse now, in these reality troubled times stunted by disbelief.

We are heading to oblivion yet not fast enough to be taken seriously, believe me. If we can’t follow the science to put on face masks, what precisely will we allow our representatives to do to save people decades from now? So far, not much, and remember if you think it matters that POTUS has rejoined the Paris Accord, you forget how quickly Biden untied us from Trump, and how quickly we can be tied back up.

Now, to change the subject just a little, I was editing Steve Crawford’s “The 1,001 Greatest songs Of the 21st Century” and found myself listening to the late MC5, Fred “Sonic” Smith, a man whose influence is bigger than ever  and whose  Rendezvous band included ex-Stooges drummer, Scott Morgan. You can hear Smith’s influence everywhere, it is a classicist punk rock, albeit too talented for the rough and tumble of punk,fast and loud, but the sound is thicker – put on Smith after Johnny Thunder and you will hear what I mean – his influence on modern rock can’t be overstated, listen to Beach Slang for one, and post-punks like Pissed Jeans.  Jesse is his daughter, and like her father, though with a much subtler touch, she will be kicking out the jams on June 4th

After essentially never hearing Jesse at all, I saw her live at the Tibet House annual gig and thought she had a certain charm and ease that belonged to herself, playing Rosanne Cash to her brother Jackson’s Johnny Cash Jr. The two have a siblings closeness, and on the pretaped cover of “People Have The Power” with Tomas Doncker on lead, the power is an iteration away from MC5’s up against the wall. The video (which closes the celebration) finds the siblings backing Doncker with the widest smiles, they look like perpetual good guys. here is Toma covering Patti…:

And as long as we are putting up videos:

There is something so temperate about Jesse, Jackson, and their mother Patti Smith. They’ve been working their way through New York’s art rock scene, and slowly their charm becomes overwhelming, soulful stardom and a seriousness that doesn’t negate fun. And as for Patti, I’ve written about her umpteen times (best live performance? Singing “Dark Eyes” with Zim in 95 at the Beacon) and while I have a punk based anti-intellectualism which means I’ll go with Horses and Easter before Gung Ho, Gone Again needs no apology.

Jesse co-runs Pathway To Paris with Rebecca Foon, and along with 350.org and the United Nations Environmental Program, present the awareness raising  evening of Americana. Last year’s line up was breathtaking, but this year has Tomas Doncker, the great, unsung hero of New York funk (full disclosure: and one of my best friends). As for Jesse, this will be the third time I’m catching her, and the last time, in 2020, she performed an excellent “Monster” (i think that’s what it is was called),  and check out her Songs From The Bardo from 2019 with Laurie Anderson. While  her father just about invented punk and her mother came out of my alma mater Creem Magazine to the earliest inklings of New York Punk, her daughter has something of the hippie in her veneer, yet with a concentrated and careful performance that makes you feel spoken with and not spoken to, joined with in shared concern and musical pleasure. Clearly, her and her brother have at least  one thing in common with their parents: an answer to the question, whatever happened to good vibes?

From the press release:

Now more than ever, we need to make peace with nature. This is the moment for us all to come together and reimagine the world in which we live. Given the deep pain of the past year, this World Environment Day is a good time to revisit how we can move forward to restore our communities, our ecosystems, and our climate. We all have the power to inspire action, and we hope that through this virtual celebration, people around the globe will discover ways in which they can step up and take action. We cannot turn back time, but we can stop destructive investments, clean up our waterways, green our cities, invest in a renewable future and plant new seeds. The world is in dire need of repair, but the solutions already exist. This World Environment Day, join musicians, poets, thought leaders, politicians and youth activists for a powerful event to inspire restoration and collective recovery.