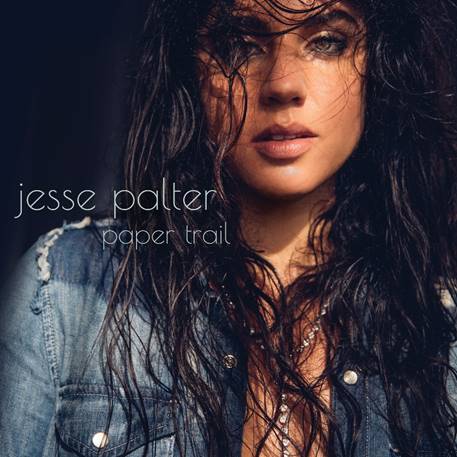 “Paper Trail reveals an artist of soul, vision and songwriting that is both joyfully infectious and heartrending” – Music Connection

The catchy track came to Palter in the shower: “The shampoo bottle fell and ricocheted off the shelf, hitting the shower door and bounced back a few times, causing this rhythmic pattern that made me think of the hand claps used throughout the song,” she says.

All of the songs on Paper Trail were written by Palter, a multi-instrumentalist, and are autobiographical, capturing an intimate snapshot of her life. She focused on strengthening her creative muscles to explore what melodies, lyrics and chord changes worked best, allowing herself to be vulnerable, brave and brutally honest.

The album was produced by veteran keyboardist Doug Petty (Céline Dion, Britney Spears), who kept the integrity of Palter’s songs from demo stage through the various layers and textures brought forth, to compliment her unique artistry.

Testament to Palter’s artistry is the caliber of studio musicians who were invited to play on the project – including bassists Tim Lefebvre (David Bowie’s Blackstar) and Alex Al (Michael Jackson) and drummers Matt Chamberlain (Fiona Apple, Pearl Jam) and Aaron Sterling (John Mayer).

Palter, who has been in the entertainment industry her entire life, began working with GRAMMY®-winning production team the Bass Brothers (Eminem) at age 15. She started her jazz career as a teenager playing oboe and trumpet in the school band. She continued to hone her skill and passion for improvisational singing throughout Detroit with music greats such as Christian McBride, Geoffrey Keezer, Sean Jones, Marcus Belgrave and Avishai Cohen, and later headlined top venues across the country.

Palter also studied jazz at the University of Michigan during a time of immense creativity. Her roommate was GRAMMY, Oscar® and Tony Award®-winning songwriter Benj Pasek (Pasek & Paul) best known for La La Land and The Greatest Showman. She also studied alongside some of the members of critically-acclaimed jazz/funk unit Vulfpeck, who’ve gone on to fund an admission-free tour with their royalties.

She moved to Los Angeles to pursue her career as an artist and songwriter and landed a deal with Artistry Music as the label’s first pop music signing. The move from jazz to pop was seamless, with her eclectic musical upbringing and deep respect and admiration for great songs and songwriters. Music has always been in her blood. Her grandmother was New York opera prodigy Dorothea Raynor.

Palter comes from a long line of creative genetics. Her great-grandfather Dan Palter invented the platform shoe, the slingback and the peep-toe via his award-winning, vintage, luxury brand Palter Deliso. He was also the inspiration for shoe icon Steve Madden. Her great-grandmother, Aida Palter, was Estée Lauder’s interior decorator. Palter’s father, Danny, currently works for Madden.

Madden in turn, has been very supportive of her career. He came to see her perform at the Blue Note in New York and introduced her to her manager.

In her down time, Palter continues to gig around town, including performances with Jeff Goldblum, who once tapped her for a private event to open for her idol Carole King.

During her recent residency at Hotel Café, she brought the house down. Veteran music journalist Laurel Fishman says “Jesse Palter’s powerful performance showcased her vocal versatility, expressing a range of mood and emotion while seamlessly blending musical genres with nuance, attitude and style.”

Sever The Ties: It’s a break-up song but not with a lover. It’s a parting of the ways of a long time relationship that was a long time coming.

TMI (Wouldn’t You Like To Know): Irrepressibly funky, slyly self-deprecating jab at her knack for putting foot in mouth.

Paper Trail: A passionate, all at once melancholy and exuberant reflection on a love left behind. The song felt divinely channeled and written in almost no time.

Waitin’: The last song I wrote on the album before I was offered a record deal. I had to prove that I was a prolific songwriter while waiting for the label to make its move.

Heavy Is The Crown: An incisive pop rocker exploring the sweet spot between inviting infectiousness and biting criticism of a narcissistic person who plays the victim.

Wildfire: A good old-fashioned love song written with Erik Kertes (Shakira, Michael Bublé). It was our first time writing together and I walked into the session saying I wanted to write a song about sex. We cranked it out in one session. Wham Bam.

Heart So Cold: Sitting in a Whole Foods parking lot on the phone with a friend, she asked me to write a song about a guy cheating on her. I had a synesthetic experience and the idea came to me right away. I saw the colors take shape, which became lyrics in the chorus. She approved it, but the song ended up being more for me than her.

Alright In Time: The first song written with an outpouring of emotion that drove the creation of the project. For any creative soul who has ever been put in a restrictive box.

The Wrong Girl: A brooding, warning-filled power ballad put forth by a true Detroit bad ass.

Goodbye My Friend: The closer of the record came to me in a dream where someone died. The day I signed my record deal, my aunt committed suicide. Though the song was about someone else, it took on a new meaning and was a powerful experience to record. You can hear the emotion in the track where my voice cracks. The producer insisted on leaving it in. It’s a dedication to my aunt.