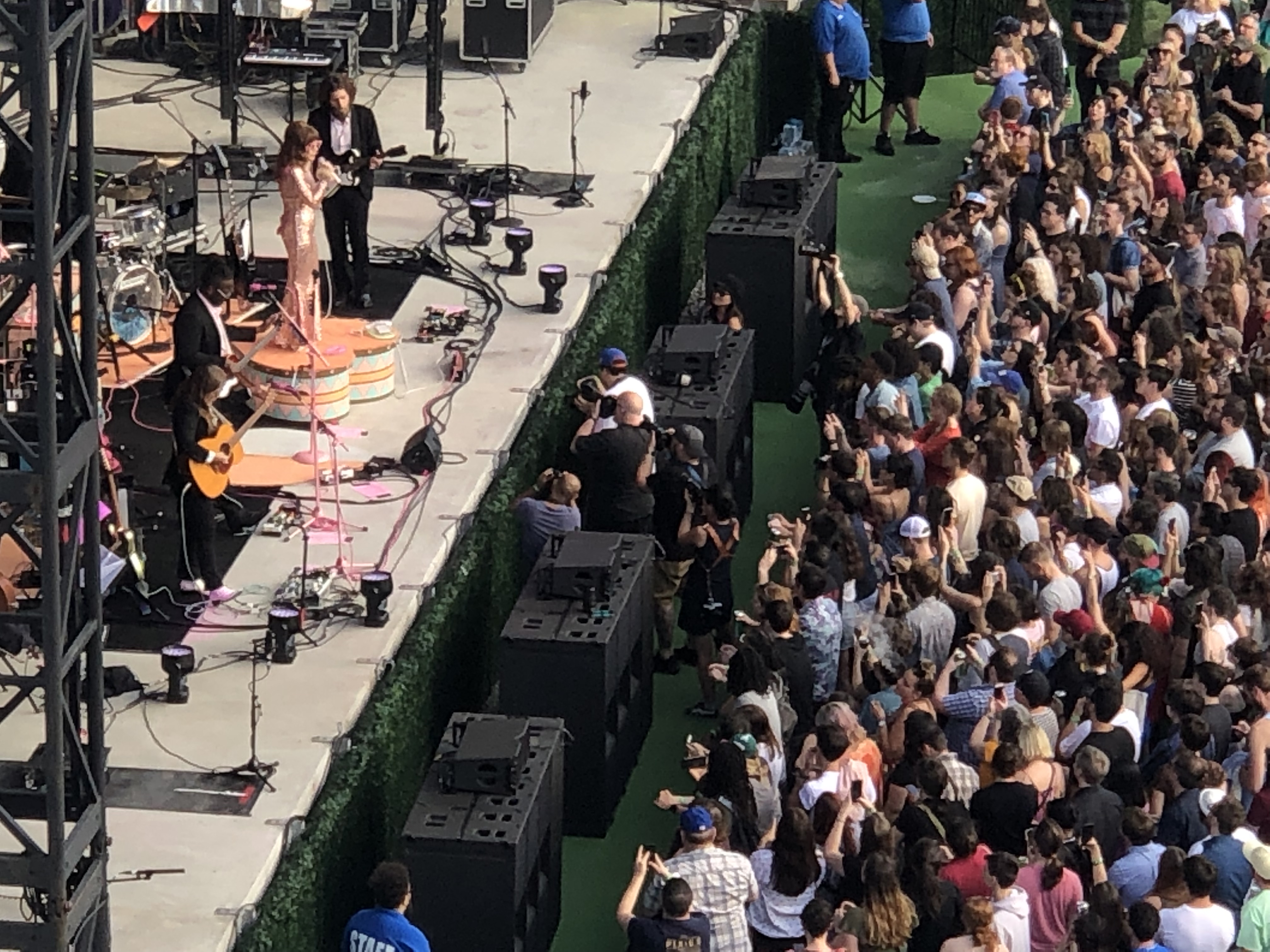 After a string of disappoints going as far back as Rilo Kiley’s 2007 Under The Blacklight, and detouring around Rabbit Fur Coat, the denizen diva, second capo after AImee, LA scenestress Jenny Lewis began resurrected her career with 2014’s The Voyager, and hit the highlights last year with the astonishing, autobiographical On The Line. Last night she brought her opening slot on the Death Cab For Cutie tour to my thorough borough Queens, and ten of the thirteen song set came from those two albums.

It wasn’t a terrible idea, I mean if she wasn’t gonna plunge into her Rilo’s back pages, why not lead with your new stuff when your new stuff is best? Death Cab For Cutie don’t much have any good stuff in my opinion, maybe three songs or so, in a long career for Ben Gibbard (they’re on their nine album). The alty arty guys reached a height in the mid-00s and have managed to maintain a career since then. I stayed for the first half hour and was happily surprised at Ben’s gift as a band leader, his esoteria didn’t give way to stasis and he maintained an easy and energetic presence throughout.

Ben and Jenny come from simpler times with similar attitudes (they formed the Postal Service together, a supergroup they maintain occasionally), and they are both in their forties, and act it sort of. For sure, Jenny is a voluptuous vision in a skintight golden dress, and with a rock band that includes strings to taste,  Jenny reached for the highlights of the past four years with ease.

Professional to a fault, Jenny opened with two of her best  from the last five years, “Heads Gonna Roll” and “Wasted Youth,” before a Rilo Kiley track sandwiched between two songs she recorded with the Watson Twins, then it is all 2010s till her hour long set is up. Jenny was a calm, and lovely, vision. Calmer than her repudiation of Ryan Adams, where Jenny bravely joined the hi-tech lynching of the singer songwriter so prominent on On The Line. Jenny said she was only in the studio with Ryan for five days. The problem with Ryan’s #metoo moment is the only thing he did wrong was sexting with a fourteen year old, which if he did it should lead to prison, and which we’ve heard nothing about since so apparently it is bullshit. Jenny simply did what the US and Europe did, pretended he never existed. The pity is, Jenny is one woman you would hope would do more for a man she worked with so diligently, a real member of the SoCal indie rock crowd stuck on the slagheap of moral bitterness.

Or you would have hoped that Lewis would have covered “Handle With Care” with Ben (instead she came out for the Deathcab encore to perform a Postal Service song), but nothing could really disappoint last night. The songs were uniformly excellent, the performances tight, smart, and lovely, the addition of strings unobtrusive without being simple shading, and whether behind keyboards or behind her guitar Jenny was a radiant figure even from the cheap seats.