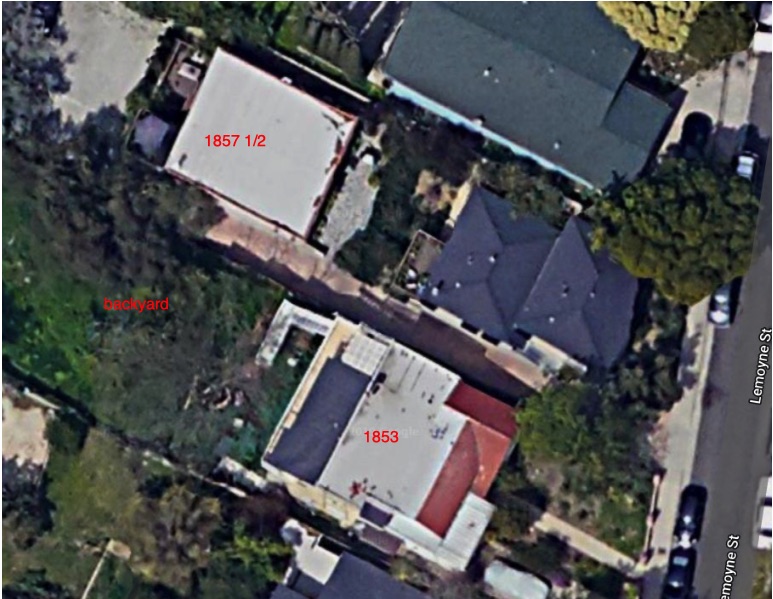 I met with Joey Santillan on Saturday afternoon at a small coffee shop in Echo Park and he offered me to continue the conversation inside his car, parked just a few yards away. I immediately thought it would be a good idea for the type of discussion we were about to have. Joey has been living in this neighborhood for a long time and he was living at 1853 Lemoyne Street on October 21st, 2003, the day Elliott Smith died. We had already talked on the phone a few days ago and he had told me that he could talk to me, and would even talk to the police… A very rare occurrence in the human species. People who want to talk on the record are extremely rare, and over the years, I got convinced I would get more information from people like Joey than Elliott’s friends or fellow musicians.

Joey is an extremely friendly person who told me he wouldn’t mind talking on the record. Most people don’t want to get involved in a 16-year-old sordid story for a bunch of reasons, mostly because they think it won’t change anything, or because they simply don’t want to be bothered. Whatever motivated Joey to talk to me, either the fact that he considered Elliott almost a friend – ‘we could have been friends’ he said – or just his naturally friendly nature, I am very grateful that he did.

On October 21st, 2003, Joey was in his backyard which was just next door to Elliott and Jennifer Chiba’s house. The couple was fighting, they had been fighting all morning long, but as Joey said, it was happening almost every day. ‘I never used to pay attention because it was every day’… ‘they were never not fighting,’ he said.

The couple allegedly  had a very love-hate relationship as he said, constantly screaming at each other, then they would make peace, but he was used to it. Joey had a friend over at his house, and they were in the backyard with their dogs when they heard them scream very loudly. They were ‘right there’ Joey said, talking about the living room located in the back of their unit, with the sliding glass door right open.

According to Joey, well before noon, probably between 9 or 10 am, he heard Chiba scream ‘I don’t give a shit! Fucking die!’ and then there was a long silence…. ‘They were arguing at the top of their lungs and then it got quiet’. Joey even said it was ‘loud and clear’ and there was no way this could have come from behind a closed door. The silence made the two friends very anxious, Joey said he didn’t hear Elliott scream at all, or if he did scream, it was not loud enough for him to hear anything. He looked at his friend and asked him ‘did someone get killed?’ and they decided to leave the house… ‘We got spooked’, he said, ‘you hear something you should not be hearing’. They left the house and came back around 1 pm, just when the paramedics were carrying Elliott away. Joey, after talking to his friend, estimated that probably 3 hours may have passed since the time he had heard Chiba scream this terrible sentence.

‘I was there outside when he was taken away’, Joey said, ‘I remember, and nobody ever asked me anything’. ‘I don’t remember seeing the police because probably if I had seen them, I would have approached them.’

These allegations are very compelling, in complete contradiction with Chiba’s story: she said she locked herself in the bathroom and got out when she heard a terrible scream (she also mentioned a noise). Joey claims he is certain that, if Elliott was effectively stabbed just after her loud ‘fucking die’ scream — as the silence that followed may suggest it — they were together, fighting in the living room.

Plus if Joey remembers the timeline correctly, this happened much earlier in the morning than we would have thought, he said way before noon, when the 911 call was placed at 12:18 and the ambulance was there around 1 pm, as Elliott was admitted to the hospital at 1:10 pm. There are barely 5 miles between the house and the hospital so the ride should not have been longer than 10 minutes.

Since Joey was gone for a few hours, he has no idea what happened between Chiba’s scream and the ambulance arrival, but for him, the two events were separated by an awfully long time, something like several hours. Would this confirm that Jennifer Chiba waited a very long time before calling the ambulance?

Joey described Jennifer Chiba as very intense, with a strong will and often mean to him. He never saw her do drugs, however, she was really into alcohol. She lived at this place for a very long time and was often getting free rent from the owner named Andre, as the house was in bad condition. ‘She got so much free rent, she complained about the conditions of the house’.

Joey met Elliott over a parking argument, as Elliott used to park in front of 1853 Lemoyne and the owner was not too happy about it. They had a fight, but Joey added, ‘What I liked about him is that he was forgiving’, as Elliott had forgotten about the fight the next day.

Joey lived at 1853 Lemoyne street for a while then moved to 1857 Lemoyne after Elliott’s death, and just a few days before the house was sold to a new owner, Adams Gerstein. Joey was then living just below Jennifer Chiba’s unit. He then complained a lot about all the noise that Chiba and drummer Robin Peringer (now living with her) were making. ‘They would come home at 4 am, very drunk and would make a lot of noise, throw things down, even start drumming!’ Joey, who had a newborn at the time, was quite furious and would knock at their door without any success. According to Joey, there was no doubt that Chiba and Peringer had a sexual relationship shortly after Elliott’s death, ‘these two had no shame!’ and when I asked him how he knew, he said, ‘she was very loud’.

When the new owner Gerstein took over in 2004, he managed to evict everybody during this year, Chiba then Joey and I don’t think Joey has seen her since.

If memory can be distorted after many years, Joey has never forgotten the words Chiba screamed that day, and this feeling has stayed with him after all this year. For him, they had a crazy relationship and it was probably a crime of passion without any premeditation.

My first attempts to reach detective King have been unsuccessful, but I intend to try again.