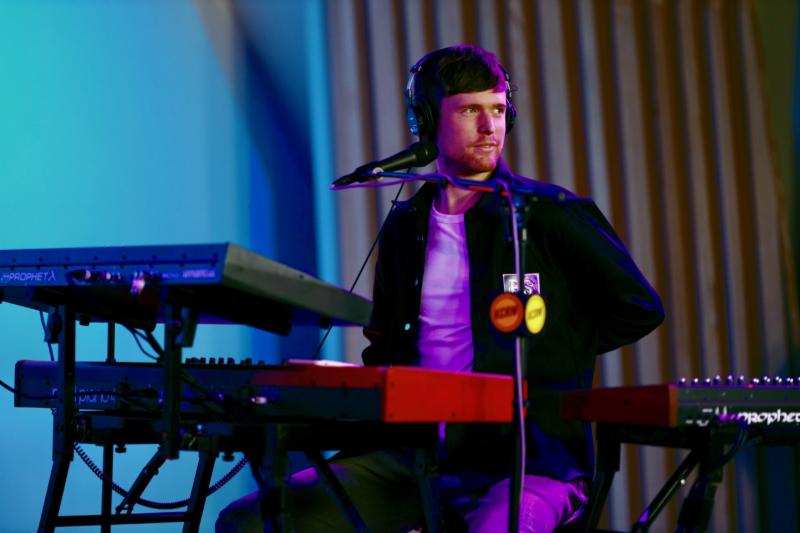 at the First-Ever Live Session from

Today, in celebration of the first-ever live session at KCRW’s brand-new Annenberg Performance Studio, James Blake performed a seven-song live set, and spoke with KCRW Music Director Jason Bentley, on the station’s tastemaker music program, Morning Becomes Eclectic. Joined by bandmates Rob McAndrews and Ben Assiter, Blake’s live performance featured songs from his latest album, Assume Form, including the title track, “Barefoot In The Park,” “I’ll Come Too,” and “Don’t Miss It.” Blake also treated listeners and a live in-studio audience to his hit song “Retrograde,” as well as an encore of a stunning rendition of Joni Mitchell’s “A Case of You.”

Blake’s gorgeous live version of “I’ll Come Too” can be seen and heard here:

The critically acclaimed Assume Form features collaborations with Travis Scott, Metro Boomin, André 3000, Moses Sumney, and Rosalía. Blake, a founding member of the 1-800 Dinosaur label collective, was first introduced to the world with his self-titled debut in 2010. In 2013, he released his follow up, Overgrown, which earned him a Best New Artist Grammy nomination. His 2016 album The Colour in Anything was a bracing continuation of his work that bent the borders between electronic music, R&B, and U.K. soul. Throughout his career, Blake has established himself as both a highly respected solo artist and one of the music industry’s most influential collaborators, working alongside everyone from Frank Ocean, Travis Scott, Beyoncé, Kendrick Lamar, Jay Z, Oneohtrix Point Never, Mount Kimbie among others.

Los Angeles’ premier public radio station, KCRW, recently moved into its new headquarters, the KCRW Media Center on Santa Monica College’s CMD Campus. The 34,000 square-foot, state-of-the-art facility acts as both a media hub and a cultural one, servicing the greater Los Angeles community, and beyond.