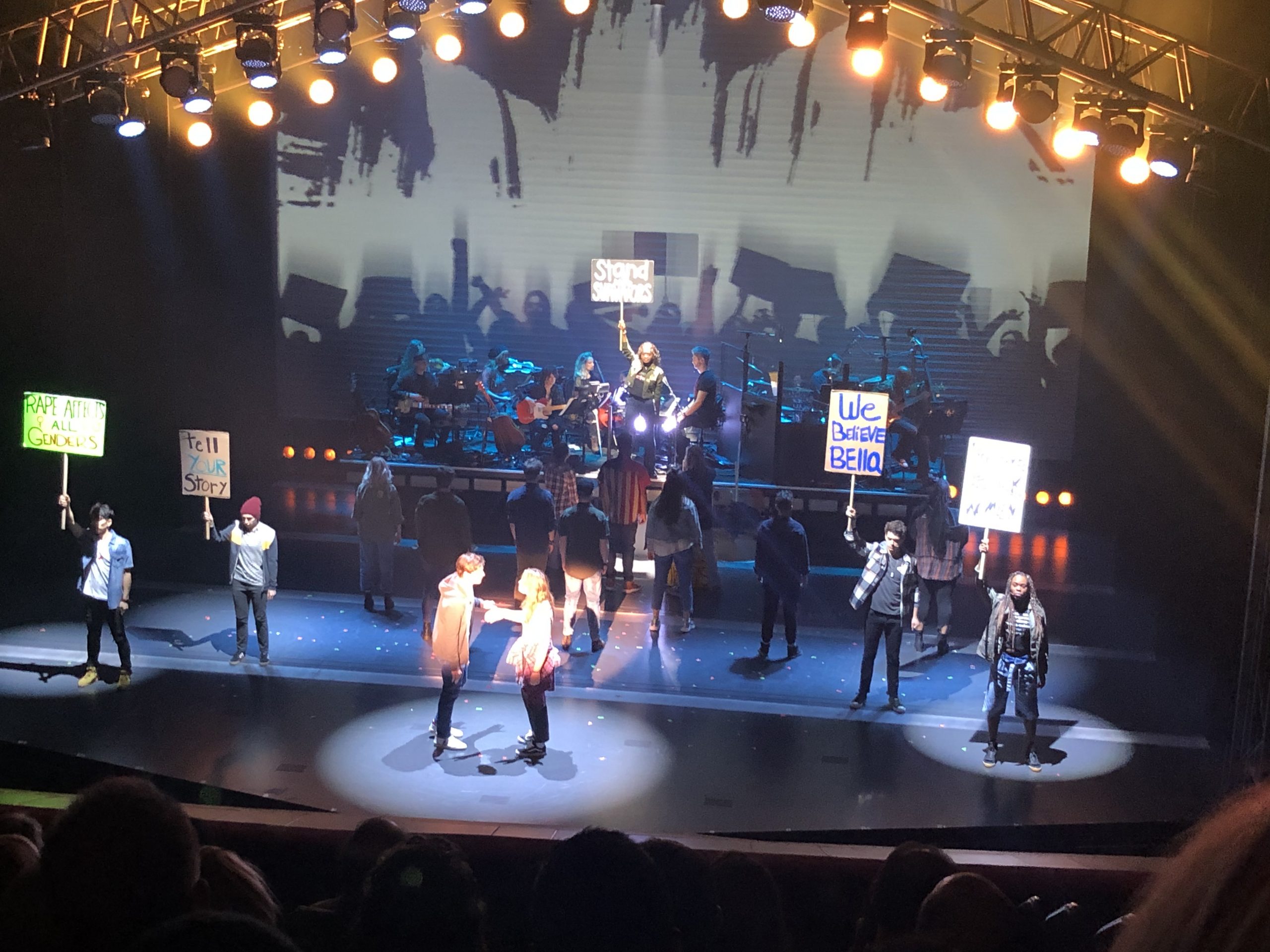 The first three Alanis Morissette albums went from her over-reaction love(r)s jones Jagged Little Pill, to romantic disenchanted attempts to find love post-world fame on Supposed Former Infatuation Junkie, and the third,  her brutal backstory of a teenage pop singer sleeping with her married manager, Under Rug Swept. The first was a first stirring of the twenty years later #metoo movement, the third  was what #metoo is attempting to save women from. The jukebox musical, “Jagged Little Pill,” with book written by Diablo Cody (she was behind the movies “Juno” and the spectacular “Jennifer’s Body”), lyrics by Alanis Morissette and music by Morissette and Glen Ballard, directed by Diane Paulus (she directed “Waitress” -an antecedent of sorts) is opening on Thursday and should be HUGE. It updates the nuclear family tropes of “Diff’rent Strokes” for the 2019 woke society, and does so pretty well. Surprisingly well. With twelve songs off the debut,and two off each of the hollow-ups, the albums (not the musical) takes Alanis from 21 year old siren of rejection to 28 year old ready to face the rest of her life. I saw her several times in those years, the first one at Roseland in 1996, and always enjoyed her histrionic fury, avenging angel. If Liz Phair saw the sex wars as one between equals, Alanis saw it as intentional unkindness in an unfair fight  and responded accordingly.

“JLP” takes the arc of self-realization and mutates it onto a whitebread, upper middle class Connecticut family in crisis. Taking place today, right this minute, it is a walking illustration of the woke culture in white liberal America, the story of sixteen year old Frankie Healy (a luminous Celia Gooding), the black, bi-sexual, activist inclined, adopted daughter of strung out on opiods Mom in denial Mary Jane Healy (Elizabeth Shanley) and porn addicted father Steve (Sean Allan Krill), and sister to overachieving Nick (Derek Klena). Nick has been accepted to Harvard and at a house party catches his friend raping an unconscious girl. Nick won’t report what he has seen and the girl is condemned for lying about the rape. Frankie and her girlfriend Jo (Lauren Patten) take on the cause of bringing her justice.

This is, of course, idiot plot. In 2019, actually just about anytime since the second half of the 2010s, the police would have had to perform a thorough investigation of the rape allegation, and if they didn’t, if it was, indeed, under rug swept because the rapist was the scion of a powerful family,  she could have gone straight to the Hartford Courant  who would have ate the story up. In other words: the story is nonsense on the face of it and I would hope college students wouldn’t buy it, and I would hope the simplification was perfect for High School girls and their Mommies. The problem with the moral quagmire in the rape story is tellingly misjudged. An older character tells about being raped when she was young, and the two are put as similar issues. Thankfully, they aren’t. If a teenage girl is raped in 2019 she is in a world that will support her, the other character, in the 1990s, was in no so such thing; both characters have been victimized enough, why create things that just don’t happen now?

Even so, it is a very good musical, stuffed to the gills with songs, good songs, that don’t shoehorn into the story, they seem to be mutating out.  So woke the Playbill bios actually include preferred prefix (a concept that doesn’t work at all but it is the thought that counts when you’re typing She/her over and over again), it tackles rape, drugs, homosexuality, and a generation that is facing being shot to death while they study, “JLP” illustrates the problem. But the writing of the male characters is so lame that the plot feels over-weaned. The porn addicted dad goes nowhere, the brother going to Harvard is bland (he should have been the rapist, obviously), the lesbian break up includes an awful betrayal of the friends with benefits affair, and the intellectual highlight occurs when Frankie, caught with a guy, lambasts her parents for condemning her for consensual sex while ignoring her friend’s rape.

Musically, there is a break out star here. Lauren Patten’s Jo had two lead vocals and they both took over the show by storm.In the first act “Hand In My Pocket” is the most joyful moment of the show, the smiling, well adjusted (despite her uber-Christian Mom’s rejection of who she/he/they really are) and is just over the moon with the pleasures of growing up, it might be my single favorite moment at the theatre this year, it made me happy. The second act stops entirely for Jo’s reaction to Frankie sleeping with a man, “You Oughta Know”. The anger is threatening and scary in its extreme, Jo leaves Frankie (who certainly wasn’t hiding the relationship), speechless: left saying “but it wasn’t mutually exclusive”. The song received a standing ovation and it will break Patten big time in the world of Broadway; Lauren still goes down on her in a theatre. The music is all 90s style alt-grunge arranged to make the largeness bigger, compare it to the dreaded “Moulin Rouge” (here) -a self-important tragedy that had a lot more fun than I did hearing pop classics stuck into yet another retelling of “La Boheme”. I love Under Rug Swept, and they should have mined it more (how about including “You Owe Me Nothing in Return” and “21 Things I Want in a Lover”) instead of the written for the show via cliche “No” (as in “what part of no did you not understand” -I didn’t include the question mark because it is clearly rhetorical).  There is one cello and one viola, and the rest is standard rock band format, and the band is terrific. Tom Kitt is credited with orchestrations and arrangements, and he manages to get the up and down of Broadway instilled in an alt rock format. If you remember “Tommy” on Broadway, you may recollect just how difficult it can be. “Thank You” and “You Learn” function as the two hits before the encore in a rock show, and are among the shows best moments, it is both clearly a Broadway Musical and equally clearly, a revisionism of the Morrisette rock show (she is playing a solo  acoustic concert “JLP” at the Apollo tomorrow, which would be Monday 12-2-19  if you’re from the future. At $350 per ticket on the secondary market I am eyeballing it but don’t think so).

The denouement occurs as Frankie runs away from home and her Mom, buying street drugs because doctors will no longer renew her prescription (another case of yeah, right), ODs. The show ends as it starts, with Mommy writing a Christmas message a year after the one that starts the show though now with self-awareness. There are many ways in which “Jagged Little Pill” -a musical that should herald a new generation of High School kids to Broadway, and deservedly so, is simply superior to the competition. Maybe there is too much plot, plot holes, kitchen sink wokeness, and morals by connect a dot. BUT it is a true reflection of Generation Z,  it should speak directly to them. It is their story, their fights, their moral compass, and their moral pendulum, and it respects them and treats them well. The songs are fine (for the most part), and the attitude of Frankie reflects a world where I might not live in but my seventeen year old Great-Niece certainly does. As we  come to terms with this next generation, I have little doubt that these are the people who will fix global warming, gun control, homophobia, and bring us a future that will make the present feel like a nightmare. And “Jagged Little Pill” is their voice raised in song in pursuit of justice.