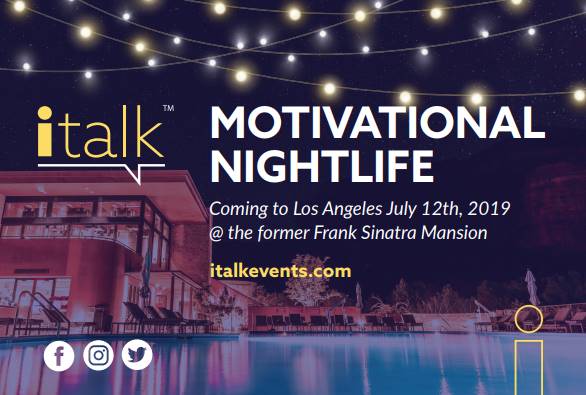 Montague and DJ Casper are pioneering a new approach to developing the next generation of thought leaders. In the past, leadership development has been somewhat formulaic.

Motivational Nightlife is the first to merge expressive art forms such as monologuing, storytelling, set design, DJ-ing, club nightlife scenes and music entertainment —  with empowering and inspirational leadership stories. All are presented by a diverse group of young, established leaders.

Comments Jen Donnell (Montague) Sr. Producer & Co-Founder: “Let’s be honest, leadership seminars, symposiums and conferences need a face lift. No more boring PowerPoints and hour long speeches. The theatrical stage evokes emotion, reflection and understanding from audiences in a manner that stands unmatched by any other platform. By merging pop culture, leadership content & stage drama to form what we are coining as “motivational nightlife”, iTalk becomes a one of a kind platform that empowers leaders to stand up, tell their stories and give their passionate why. Ultimately, challenging attendees to think out of the box, drive creative thinking and inspire them to cultivate their own stories, based on their why. What you #uTalk4?“

Comments International DJ Casper, Music Director & Co-Founder: “Leadership content, pop culture and stage drama are allowing us the ability to be creative without restraint. The stories that are delivered are bold, raw and authentic. We don’t cover up the truth and we don’t apologize for speaking it. We speak what’s on everyone’s mind. We are here to inspire and empower the generation of tomorrow and evolve music.”

The program opens at the top of the estate’s hill amidst a club-like, scene, with guests enjoying cocktails, mingling at sunset and listening to original music produced by International DJ Casper. As the sun sets, attendees will experience an opening monologue by Montague entitled “Courage” – delivered from the audience.

Strong stark transitions involving music, sound, lighting and set moves will advance the show with rapid motion. Attendees will experience 9-minute iTalks one after the other, centered on Vision, Change Acceleration and Endurance with special effects and interruptions, challenging the leaders to examine themselves, their purpose and their talent through a different lens.

Motivational Nightlife is produced by Jennifer Montague and International DJ Casper. The event is directed by Tori Bridges.  Porsche of Woodland Hills will be showcasing luxury vehicles on the red carpet. Take a virtual tour here of the space.

Musician/percussionist, formerly with The Roots. Click here to learn more.