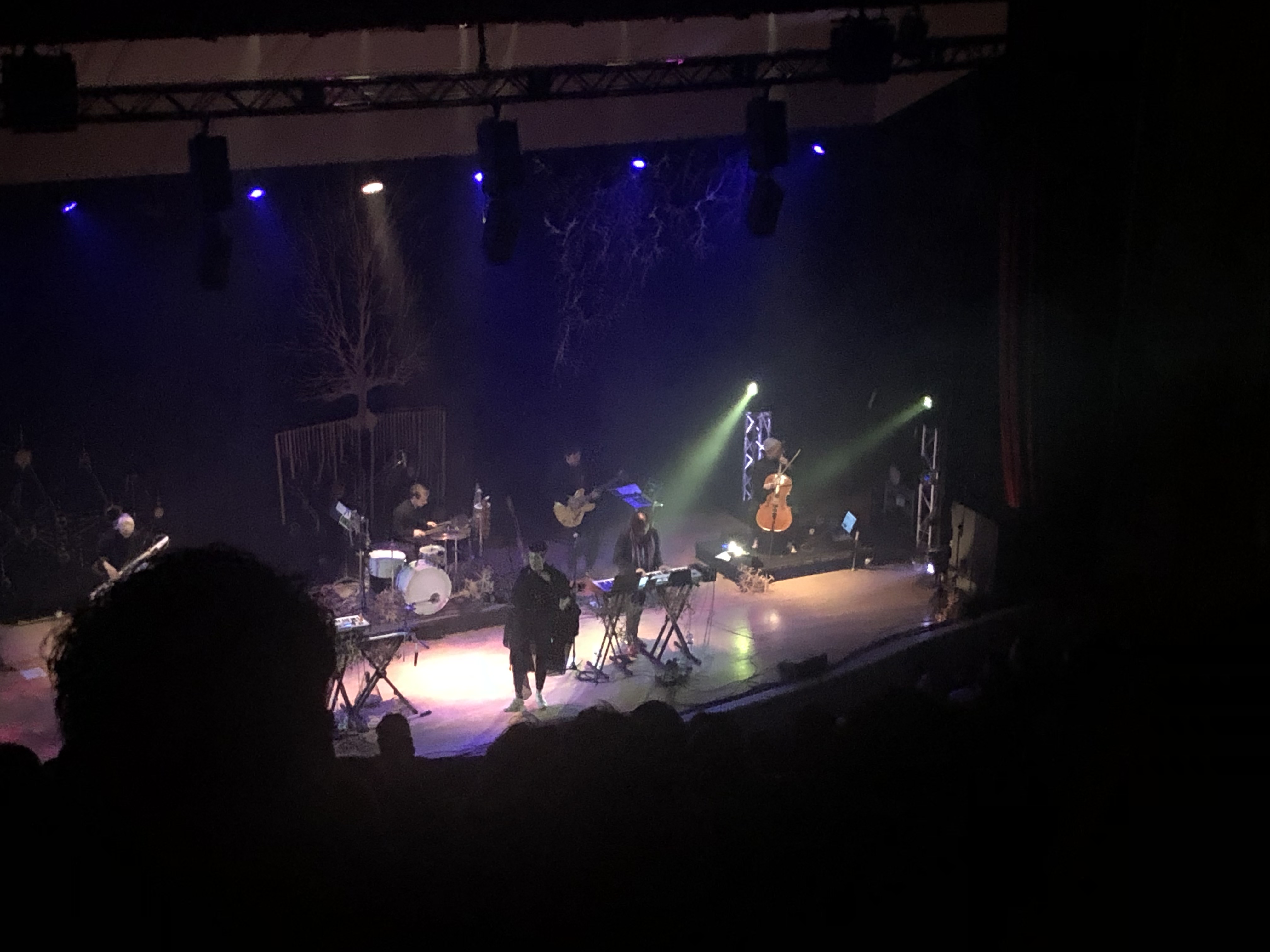 In my review of “Harry Potter And The Cursed Child,” back in 2016 (at the Palace -before it came here), I opened with a paragraph about Imogen Heap’s award winning compositions for the play (here): “The trebly echo effects that recur in the second act, the brooding, as opposed to fascist anthem, you might expect, that opens “Part Two”, the entire tempered tenseness of the uncluttered synths and back tapes, they all feel like signature moments of her sound.” While I’ve never paid too much attention to Heap, whenever I’ve noticed her I’ve been very happy I had. Till last night.

If there is anything more irritating than the 41 year old woman’s twee twittiness, I haven’t  seen it. Her overlong explanations for songs that are, sincerely, not that deep: and sure, when you make the bulk of your money on song placement in US shows (her big break came with the use of a song at the end of “Garden State”), there will be stories worth hearing, are momentum killers. If that’s your plan, to stop your momentum by talking,  you might as well be Cher and have a costume change every two minutes as well. If  her chat was annoying. the  decision to have an intermission after the first hour of a two hour set, was pathetic.  Paul McCartney, in his 70s, can do three hours without a breather, why can’t Imogen do two?

I was in the second to last row last night at the Town Hall for Imogen’s return to New York, as part of a career spanning, world spanning, tour. With her pop band Frou Frou collaborator Guy Sigsworth in tow, her musical gloves (using sensors and amps it responds to movement of her hands and arms), and a sorta shawly Stevie Nicks meets Voldemort’s daughter fashion black dress (Guy was wearing a Gryffindor scarf), the audience was primed and I was glad to be at the sold out show, The musician’s musician looked lovely and odd, and sounded not like Hermione but like Margaret Thatcher: sort of a striving upper classness, and perhaps because of my seat, I couldn’t quite make out what she was saying, and when I could it was all too precious by half.  Imogen’s stuttering, looping conversation reminded me so much of my youth. I used to have a friend named Hillary Ogden, who used the same effects, a sort of deprecating, half remembered, head scratched anecdote as whimsy Hugh Grantness.  Sure, I hate American self-regard as well, but pretending humility, as Martin Amis almost said about Pulitzer prize winning authors, is almost as annoying.

What it boils down to was, Imogen got on my nerves. Some of the music worked (though those gloves are a pointless eyesore that seemed to help the music but didn’t because there was a PC behind that could have handled it the sound with ease, so it was an affectation) and some of it was too stridently Gothlike, laissez-faired Kate Bush.  And when she wasn’t annoying me, Guy, the Dobby of  experimental indie pop, was. Between the two, they failed to be really entertaining and there was no reason for the failure except an inability to let the songs do the work. Sometimes, when you don’t like a performance, you are secretly not displeased, I wrote a less than flattering review of Sting once that felt like payback for a dreadful show. But not Imogen. Her early material is like synth pop with illusions of grandeur, sometimes deservedly so, her latter stuff art pop without illusions of grandeur though some of it should have had. Keep in mind that the wonderfully named, Dickensian character Imogen, got her big break from Nik Kershaw, so pop is indeed the wheelhouse, her later material never lets her get overwhelmed by technology and manufacturing. She is considered a pioneer among women, with current pop superstars Taylor Swift and Ariana Grande, owing her debts, and she seems awfully nice  and it isn’t enough. Have you ever gone on a business lunch and somebody you don’t know hogs the conversation, Imogen has that problem, it isn’t that she is wrong but that she speaks too much, and  in a highly mannerized form that gets old… particularly if you are missing every other word.

And when you get to the music, it isn’t bad at all. She’s like Brian Eno for underachievers, a sonic flim flam artist that sets you up before devastating you. In the first set “First Train Home” is precisely what we want from Heap: it is synth pop with backbone. Towards the end of the second set she completely mastered the evening with three songs from “Headlock” to the epic ache of “Hide And Seek”. She does quiet exceedingly well. And she can do loud as well. Not shouting, but loud. It isn’t always great but it is never less than thoughtful and intelligent,she is like Miss Marples comes to the big city: an Agatha Christie character, somebody who is smarter than they appear to be. I realize when you invent a musical instrument you can be excused for wanting to share it with the world, but perhaps she should resist the urge. We can all read, she doesn’t have to repeat what she told The Fader last year, we know it,.

Heap is a gifted musician, and I would love her if only for “Cursed Child,” I get why people admire her so much. She should trust the audience has already met her half way and save the eccentricities for a lunch with a new acquaintance.