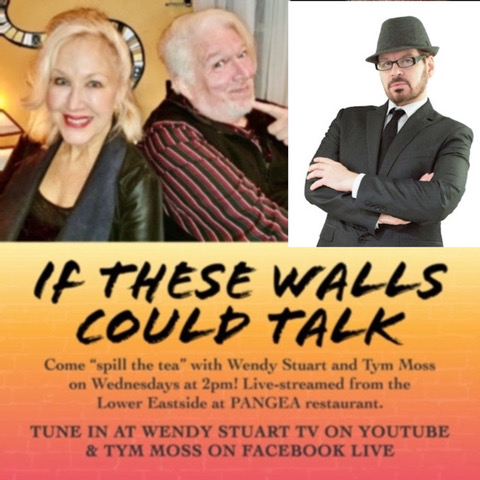 Ike Avelli will be a featured guest on “If These Walls Could Talk” with hosts Wendy Stuart and Tym Moss on Wednesday, July 14th, 2021 at 2 PM ET live from the infamous Pangea Restaurant.

Ike Avelli began his career in 2009 as a ‘last minute’ fill in at a Christmas Party doing Stand Up comedy. The sound of laughter sealed the deal, and he would continue to write/perform his own material. Some of his idols are Joan Rivers, Sandra Bernhard, Rodney Dangerfield, Whoopi Goldberg, Tracey Ullman and Chelsea Handler.

Since 2009, he has performed at many venues around the U.S.: Las Vegas, NV; NYC; Atlantic City, NJ; Windsor, CT; Philadelphia, PA; Hollywood, FL to name a few.

He is a supporter of the LGBT Community and has performed for LIFEbeat (lifebeat.org), The Imperial Court of NY (ICNY.org), and Gay Men’s Health Crisis (gmhc.org).

He has appeared on many talk/radio shows. Ike also co-hosted on the #1 Show on Wildfire Radio “The Idiots” from 2017 to 2018 and has appeared in the LGBT publications of GET OUT (Cover Story) and NEXT Magazine. In 2021 Ike and Tym Moss host a podcast called “Loose Lips” and has caught a buzz in the U.S. and internationally.

“50 Shades of Gay was a hit in NYC during PRIDE and SOLD-OUT Bally’s in Atlantic City in 2019. It was also part of the 2017-2019 Rochester Fringe Festival and SOLD OUT all four nights. The Huffington Post called it “the performance of the summer”, while hailing Ike Avelli as the “mastermind of creativity”.

Ike wrote his first book entitled, ‘A Year In The Life Of Ike Avelli…And It Ain’t Pretty”, a diary of the year 2017 and was listed in the Top 20 new releases on Amazon.com.

He was nominated for the 2013/2015 Glam Award for Best Comedy Performer.

Winner of the Get Out Magazine LGBT 2014 Comedian of the Year.

Winner of the 2018 Providence Fringe Award for 50 Shades of Gay.

Watch Ike Avelli on “If These Walls Could Talk” with hosts Wendy Stuart and Tym Moss on YouTube here: