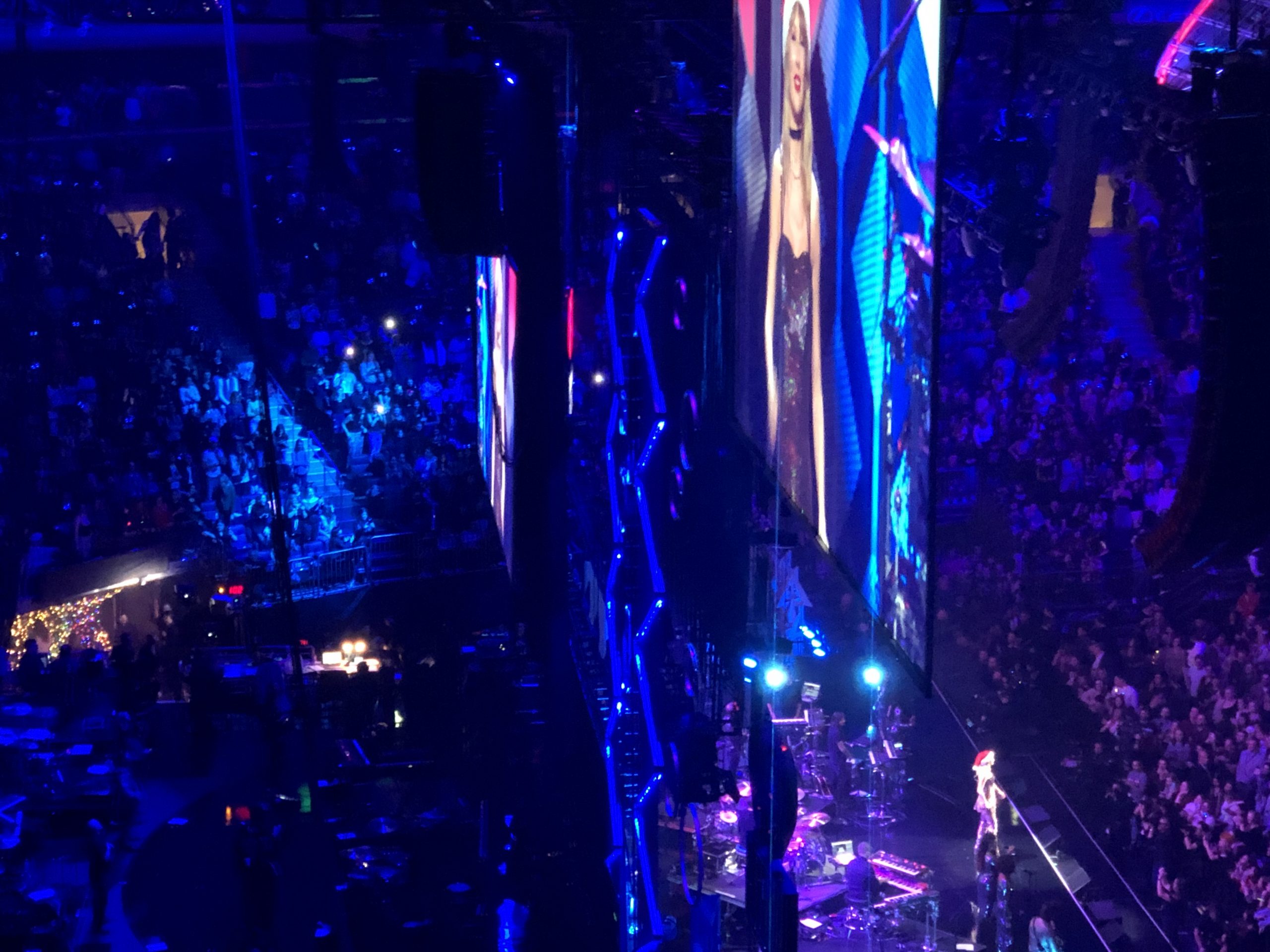 In one of the odder decisions, for one of the best Jingle Balls to date, Taylor Swift opened the concert last night at Madison Square Garden, and the Jonas Brothers came on next. The first 35 minutes of the five hour multi-act , annual blow out,  was Swift, the following 25 minutes the Brothers Jonas, and that makes the first hour of the evening a superstar, pop star summit. Yes, even today, even with a huge section of the audience waiting breathlessly for Lizzo (who failed to disappoint), the first hour was a towering thing that alone could have filled MetLife several times over. The result of this power play was an older skewering audience than Jingle Ball is used to. Twenty somethings more than tweens. And an audience quieter than in years past. But a breathless, intoxicating, very early meeting  with Taylor, that is only  one of the four East Coast appearance expected through 2020, was the definition of a Christmas gift. There was the GMA show the day Lover dropped, and there will be two stadium performances next summer in Boston, and otherwise we won’t be seeing her. So, yeah, a biggie, and with Taylor celebrating her 30th birthday yesterday, thirteen years after her first album, it is no surprise to see her audience graying into their twenties.

As Taylor at Jingle Ball goes, it is in the top three:

1 – The High School confidential 2012, with Justin Bieber, Ed Sheeran, and One Direction joining her (here)

In theory, there wasn’t anything the slightest bit wrong here, but as happens so often with Taylor… the song selection was a touch strange. Three songs off 1989, three off Lover, and that new single “Christmas Tree Farm”. Not to be guilty of greediness, Taylor performed NINE SONGS last week at Jingle Bell Ball in London last week. The difference is… we got “Welcome To New York” instead of “London Boy” and that’s a fair exchange… but we had no equal to “22” which she added on there, and “We Are Never Ever Getting Back Together Again” -both off her best album, Red, and we got neither. Elvis Duran rolled out a birthday cake as tall as Taylor and had us sing “Happy Birthday To You” -not nearly as moving as the December 12th 2014 set where at the stroke of midnight Taylor, riding the highest moment of her career so far, interrupted a song to whisper “It’s my birthday”. You might note that the lead guitarist she flirted with during “Blank Space” was the same guitarist who was with her during the 2010 NBC Thanksgiving Special. So a solid, enjoyable outing from Taylor who could slip away for an early birthday dinner with her, er, lover. Taylor used to date Nick Jonas, so it is a pleasure to announce that Joe stole the show from his reunited brothers. Joe is my fave Jonas, and I prefer DNCE -whose “Cake On The Ocean” is a biggie, and who were excellent and fun at the 2015 Jingle Ball, to Nick and Kevin. The set was a Christmas song, 2008’s “Burnin’ Up,” and three off the current album, with “Sucker” improving live.

With the first hour in the history books, and if you can ignore the hour, and even if you can’t, Jingle Ball is usually pop radio written larger and liver than life itself, and it wasn’t. How do you do an art of pop music radio 2019 without Ariana Grande, Billie Eilish, and Lil Nas X? How do you do an art of pop without a single rapper? Well, they did it and paid for it. Dan + Shay didn’t bring Justin Bieber out for “10,000 Hours” though they did get a giant singalong for “Tequila,”  the great bedroom bummer singer Lauv was given one song to represent, he choose “I’m So Tired…” and, no, no Troye Sivan. Monsta X represented K-Pop as an all boy, breathless, and overexerted somewhat minor league pop band in a world that belongs to BTS. Current not ready for prime time but getting there EDM pop chanteuse Fletcher played her hit “Undrunk” and her newbie “One Too Many”, the queer unqueer singer’s EP you fucked up new york city for me is the essence of modern pop stardom. All songs about an ex.  The hope for live performances is that it tells you something you don’t know, for Scottish heavy emoted Lewis Capaldi it taught us he is a self-deprecating sweetheart. He should be better, he deserves his success just because he dubs himself a chubby young man who enjoys putting food into his mouth,  and you can’t help but want to hug him. Camila Cabello was delightful, beautiful, better than when she was opening for TayTay on the reputation tour. The Romance songs were better live and still the two off her eponymous debut were much better. Opening with her epic “Never Be The Same” and closing with the equally epic “Havana” she didn’t bring out her beau Shawn Mendes for “Senorita”. Niall Horan complained how he never thought he’d be the toilet break performer though his problem is a flatness to his Americana turns to pop songs and over exposure in the market place (he is always playing New York) without the hits to back it up.  And Lizzo…

LIZZO was a force of nature, though she only brought out her flute for “Truth Hurts,” that’s about the only complaint for the wonderful performer, energetic, huffing and puffing a little, and taking breaks to catch her breath and also to take in 20K people screaming for her. All six songs were excellent, and Lizzo was a not graceful but pleasurable dancer with a fine set of largeish back up performers. It must have felt, you could see it felt, like absolute magic to be Lizzo. Everything you can think of US shame in its treatment of people even nominally different was blown out of the water by the sexually fluid, large, black popstar. Some overweight people are nimble on their feet, Lizzo isn’t but she is a pro, she is confident through rehearsal, and she moves with a sureness that is a pleasure to watch. Between Lil Nas X and Lizzo, the light is turned on and stardom is turned sideways. Nothing is what you think it should be, in 2019 the inroads for people who don’t fit into the entertainment business purview, a liberation begun in the mid-1990s, now bears fruition. Lizzo is tops, her songs extravagant anthems to positive self image,  dance wave adorability. “Good As Hell” and “Truth Hurts” brought the house down. And when she was over so was half the audience. I myself passed on 5SOS and Halsey, leaving my niece and great niece still  well enthralled.

I miss the radio side of Jingle Ball as the evening is now built around commercial breaks in ways it wasn’t even five years ago. Gone is the revolving stage (they don’t need it, the breaks for ads gives them the time), the small stage is gone, and the sense of a secret show shared by the few lucky enough to be there no lonher exists. And I miss the younger tweens screaming their lungs out for One Direction, makes you wonder if Z-100 are losing their grip on Generation Z. But it was a great evening and one more reason to live in the greatest city in the world.