How Did Elliott Smith’s Trauma Surgery Service Consultation End Up At The Rock ‘N’ Roll Hall Of Fame? 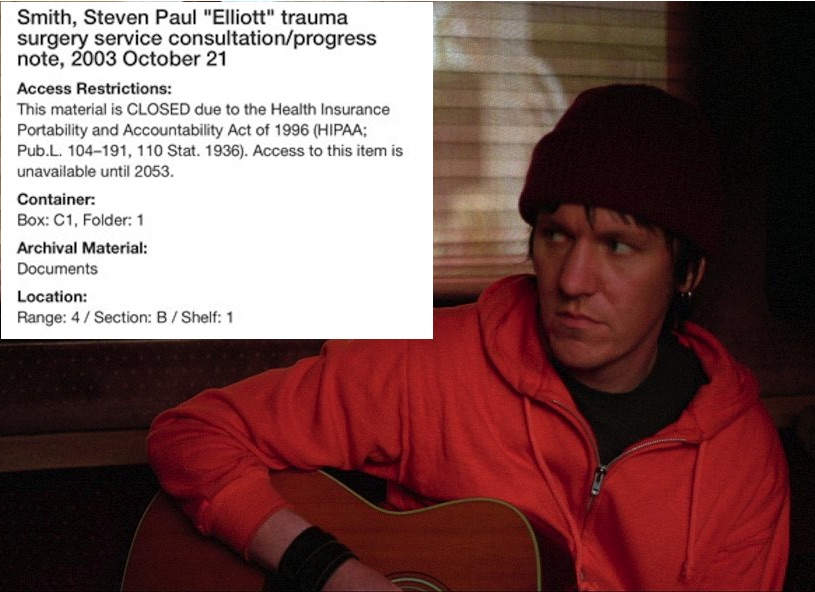 It was recently brought to my attention that, if you research the archives of the Rock ‘n’ Roll Hall of Fame library website, you find this item among many others

Access Restrictions: Some of the audiovisual materials in the series are on defunct media formats and, therefore, are RESTRICTED. Access copies of these materials will have to be created prior to use. Consult the Library and Archives staff in advance of your visit to ensure access to these materials is available. One item in this series is CLOSED until the year 2053. Access to this material is unavailable until that time.

The document is part of the Gary Johnson Collection under the Series VII: Various Artist Files and Recordings, and this sounded intriguing enough to do a little research about it. I was very surprised to see medical records among recordings, books, articles and different music-related items. How did Elliott’s surgery service consultation end up there? Among Nirvana, Elvis Presley, the Ramones recordings?

Gary Johnson happens to be the co-owner of an independent record store here in Silverlake (Los Angeles) and it was quite easy to find him. After talking to him this afternoon, I have the beginning of an explanation, but the mystery is still very much there. Gary nicely explained to me he found Elliott Smith’s trauma surgery file inside the sleeve of a CD, he couldn’t remember what CD it was, but it wasn’t an Elliott Smith CD. He had no idea how this ended there, but he donated it to the Rock ‘N’ Roll Hall of Fame with other items. He even told me a similar story happened for Marvin Gaye, so apparently, rock stars files got easily lost in record albums? How strange is this!?

The whole thing is still very bizarre, Rockaway Records have been buying, selling and trading collectible CDs, vinyl, and music memorabilia for more than 2 decades and I can only suppose they received the CD containing the file from someone close to Elliott. To my knowledge, only the family members (and maybe Jennifer Chiba as Elliott’s last companion?) could have been in possession of such a document. This is what I found regarding the HIPPA and it is not even sure if Jennifer Chiba was entitled to have this document:

‘After a person passes away, HIPAA’s protection on medical records is enforced for the next 50 years. During that time, only the decedent’s legally recognized representative has the power to authorize access to or disclose the person’s medical information.

A representative could be the executor or administrator of an estate, or a person designated in a living will. Some non-representatives, such as family members or other individuals involved in a decedent’s health care, may have limited access to medical records through health plans or health care providers.

HIPAA does not apply to any medical records 50 years after a person’s death.’

I also know that the family got the ER and hospital records, they even told me that these records ‘reveal little except they apparently did emergency treatment to stop bleeding from two wounds to the heart but failed to notice a third one (an exit wound) before trying to get him up to surgery.  He died before they could do anything in the operating room.’

I don’t see a family member hiding this document in such a trivial place, and I am not sure why Jennifer Chiba would have put it in there either. But I only see one explanation for this mystery, she (or someone else?) got a copy of the file, put it inside a CD and forgot about it.Then this person gave away his or her music collection to Rockaway Records when she or he moved? It appears that Adam Gerstein, the owner of the propriety where Jennifer Chiba lived, filled a residential eviction case barely a year after Elliott’s death, so she had to move shortly after. But we may never know how this file ended inside a CD.