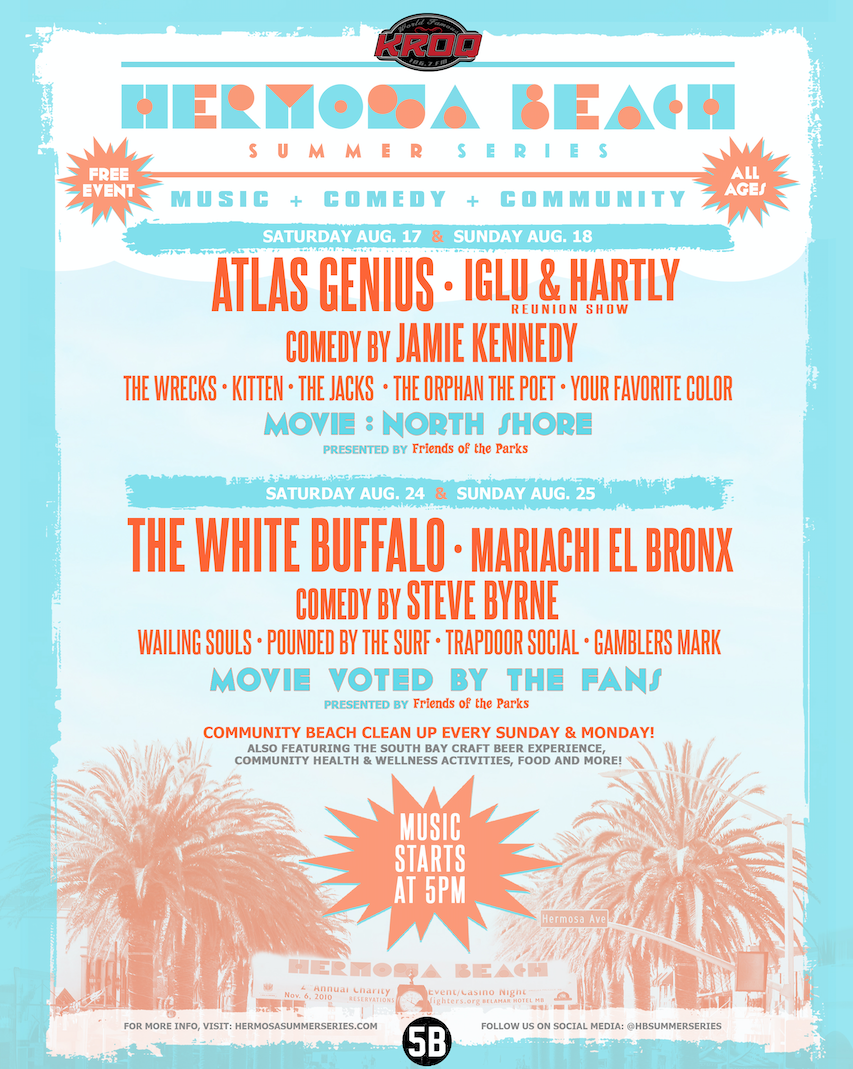 Full Pre-event, On-site Experiences To Be Announced In The Coming Weeks.

5B Artists + Media has announced the lineups for the 2019 Hermosa Beach Summer Series, presented by KROQ.

The popular FREE community event returns to the sands of the quintessential Southern California beach town over two weekends in August, and for the first time ever, is expanding to both Saturday and Sunday (Aug. 17/18 and Aug. 24/25), each offering a jam-packed lineup of music, comedy, movies on the beach and other family-friendly experiences.

Sunday, August 18 brings an exclusive one-time reunion show by LA rockers Iglu & Hartly (who in 2008 were cited as one of “Twenty Bands Making America Cool Again” by influential UK rock magazine NME). Rounding out the bill is Columbus, OH pop rock trio The Orphan The Poet and LA rock band The Jacks.

Iglu & Hartly frontman Jarvis Anderson says, “We really still can’t believe we will be coming back together to reunite in our old stomping grounds. Hermosa Beach was always a place of love and support for Iglu & Hartly and we considered it a 2nd home. We are so grateful to Hermosa Beach Summer Series for this opportunity to make some magic on stage again….. in this city.”

Saturday, August 24’s headliner is Los Angeles’ The White Buffalo (the stage name of musician and singer/songwriter Jake Smith) who has performed at numerous music festivals around the world, including Bonnaroo, as well as on shows with the likes of Jack Johnson, Ziggy Marley, and Grace Potter and the Nocturnals, among many others. Over the years, his music has been featured on Sons Of Anarchy, NPR and Jimmy Kimmel Live! Comedy favorite Steve Byrne (“Sullivan & Son”, Comedy Central, Chappelle’s Show) will also perform standup, along with additional music from instrumental alternative surf group Pounded By The Surf and LA’s Trapdoor Social. The evening comes to a close with a surfside showing of another classic movie via Hermosa Beach Friends of the Parks, as voted on by Hermosa Beach locals.

Closing out this year’s series on Sunday, August 25 is headliner Mariachi El Bronx (the popular alter ego of indie rock band The Bronx) who have graced festival stages such as Coachella, Shaky Knees, Driftwood, Riotfest, Punk Rock Bowling, Reading and Leeds, and more. Also on the bill are three-time Grammy-nominated roots reggae legends, Wailing Souls who are celebrating their 50th anniversary as a band, as well as LA rockabilly faves Gamblers Mark.

Mariachi El Bronx vocalist Matt Caughthran says, “We are so stoked to be a part of the Hermosa Beach Summer Series! Looking forward to celebrating the sacred California coastline with music, friends, family, and maybe just a couple of drinks… see ya there!”

Cory Brennan, founder of 5B Artists + Media and Executive Producer of the Hermosa Beach Summer Series says, “We are thrilled to have these incredible artists and local businesses involved. The enthusiasm from the community has been overwhelming and I am looking forward to celebrating the city of Hermosa, its community, and its culture with all of you in August.”

Set times and additional programming times will be announced 2 weeks prior to the first weekend of events.

Community cleanups will take place each Sunday and Monday morning, with the help of Heal The Bay. Details will be announced on the HBSS website.

More details will be announced in the coming weeks, including local kick-off events, general programming, and details on the full South Bay Craft Beer Experience.

Huge thank you to our Sponsors (in alphabetical order) who have made this festival possible – BANG Energy, BOS Ice Tea, KYLA Kombucha, L.A. Libations, Sharkeez Restaurant Group and The Standing Room.

We also want to thank our Partners – Hermosa Beach Friends of the Park, Heal the Bay & SoHo Yoga – who each have brought a unique element that speaks to the South Bay way.

To be involved in the festival, please reach out to Chris@SIX18Media.com.

Additional music by: The Wrecks, Kitten, and Your Favorite Color

Additional music by: The Orphan The Poet, and The Jacks

Additional music by: Pounded By The Surf, and Trapdoor Social

Movie: TBD, presented by Hermosa Beach Friends of the Parks

About 5B Artists + Media:

5B Artists + Media is a leading global music management and events company with offices in Los Angeles, Brooklyn, and Birmingham, England.

About Hermosa Beach Friends of the Parks:

Friends Of The Parks is the official 501(c)3 partner of the Hermosa Beach Summer Series. The non-profit is dedicated to preserving and enhancing Hermosa Beach parks, including our largest park — the beach!