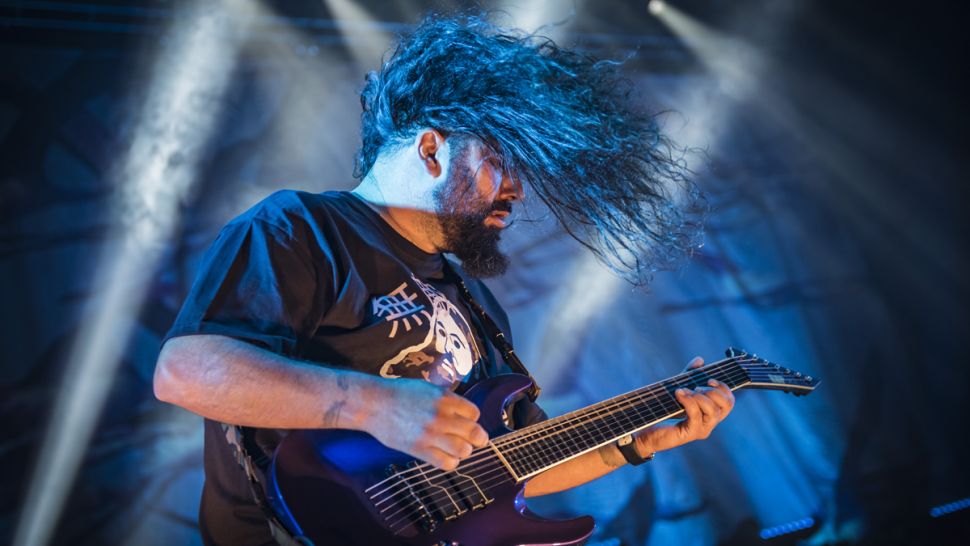 Deftones’ Stephen Carpenter: Have we become this stupid?

I don’t ask musicians to be Einstein, but there are some limits to stupidity. I suppose that musicians are like the rest of the population, some get masters and PhDs and other ones could not pass the most elementary exam. In this era of flourishing conspiracy theories, it’s probably more and more the case: Deftones’ guitarist Stephen Carpenter just got the award of stupidity.

During an episode of the podcast Tin Foil Hat with Sam Tripoli – I know, they are asking for it – Carpenter revealed he was one of these crazy flat earthers. ‘If you think you live on a spinning, flying space ball, you are in a cult,’ Carpenter said while adding that the shape the Earth was is ‘still to be discovered.’ And because stupidity has no boundary, he also confessed his appealing lack of knowledge about basic biology, claiming that viruses were ‘something the body creates.’ ‘You are not capable of catching a virus from somebody,’ he said. ‘You develop viruses because you have some type of poison or toxin within you. And that’s your poisoned and toxined cells secreting the virus to clean them from the body.’ Wow, just wow… so much ignorance is difficult to comprehend in 2020. Of course, he declared himself an anti-vaxxer and anti-mask kind of guy, claiming that people who are wearing masks are ‘suckers’ who had ‘been played,’ and that there’s ‘never been one single vaccine that’s ever worked ever,’ that polio was ‘never eradicated.’ ‘[It’s] all poisons, you can never get it out of your body,’ he said about vaccines. ‘[Your] body has no means to expel it, it’s stuck in you forever and you just suffer with whatever it becomes.’ Beliefs have consequences, and declarations like these are obviously damaging in the middle of a pandemic, at a moment when there is hope for a vaccine. Have we become this stupid?

When it comes to stupidity, Carpenter is far from being alone, in 2016, rapper Bobby Ray Simmons (aka B.o.B.) twitted about his convictions that the earth was flat. ‘No matter how high in elevation you are… the horizon is always eye level … sorry cadets… I didn’t wanna believe it either,’ he wrote with photos taken at high altitude. ‘The cities in the background are approx. 16miles apart… where is the curve? please explain this.’ ‘A lot of people are turned off by the phrase ‘flat earth; … but there’s no way u can see all the evidence and not know… grow up,’ he added. ‘I’m going up against the greatest liars in history … you’ve been tremendously deceived.’ The rapper even started a GoFundMe campaign to prove the earth was flat, and since it was in 2017, the page has now disappeared, but he was aiming to raise $200,000 for the project. Have we become this stupid?

As for vaccination, famous R&B singer Toni Braxton admitted her distrust in vaccines in her 2014 memoir. She even suggested that the MMR vaccine given to her son may have contributed to his autism. ‘Maybe it’s just a coincidence that after my son’s first MMR vaccine, I began to notice changes in him,’ she wrote. She also believed that her son’s autism was God’s punishment for her having previously gotten an abortion. I am not saying that Toni Braxton is stupid but this ignorance is staggering and her belief is a disaster at many levels.

It’s barely surprising that Smashing Pumpkins’ Billy Corgan has once expressed some anti-vaxxer views. After all, he has made regular appearances in InfoWars, the show of conspiracy theories king, Alex Jones. In 2009, Corgan exposed the reasons why he didn’t plan on taking the H1N1 vaccine. He also leaned heavily on believing that the virus was man-made: ‘I do not trust those who make the vaccines or the apparatus behind it all to push it on us thru fear.’ Corgan even complained about the government’s laws that made vaccinations mandatory. Nothing seems to have changed, right?

M.I.A. has also revealed herself to be an anti-vaxxer, tweeting dangerous non-sense such as “If I have to choose the vaccine or chip I’m gonna choose death – YALA’ back in March. In other deleted tweets, M.I.A. explained she hated the fact she had no choice but to get vaccinated as a child before school admission, and she also claimed that her child got very sick for 3 weeks because he was given 3 vaccines. There are probably other famous names to add to his dumb list. There’s also Kanye West who declared in an interview with Forbes that vaccines were the ‘mark of the beast.’ It was coming from Kanye, but it is very disappointing to see so many musicians rejecting vaccinations.

Just like Carpenter, who won the anti-science trophy, too many musicians reject science while pretending to do some ‘research. They have such a high esteem of themselves that they think they know better than centuries of scientific research. How ridiculous is B.o.B’s GoFundMe page to prove the earth is flat? Who does he think he is? An amateur ‘researcher’ who can disprove something we have known since the Antiquity? Pythagoras proposed that the Earth was round around 500 B.C and he was followed by Aristotle. We had 2000 years to confirm it.

As for vaccination, it has to be one of the most important things right now, when we are all fighting this pandemic. People rejecting vaccination represent one of the most damaging challenges we are currently facing, it’s anti-science and not only retarded but very dangerous.

This dumbing down of the population seems to be a deadly combination of bad education, gullibility, and YouTube-8Chan-WeMe ‘research’ that has only increased with this too-much-time-on-your-hands pandemic. This certainly touches the entire society and musicians are not immune, but the more famous they are, the larger the platform for their dumbassery.