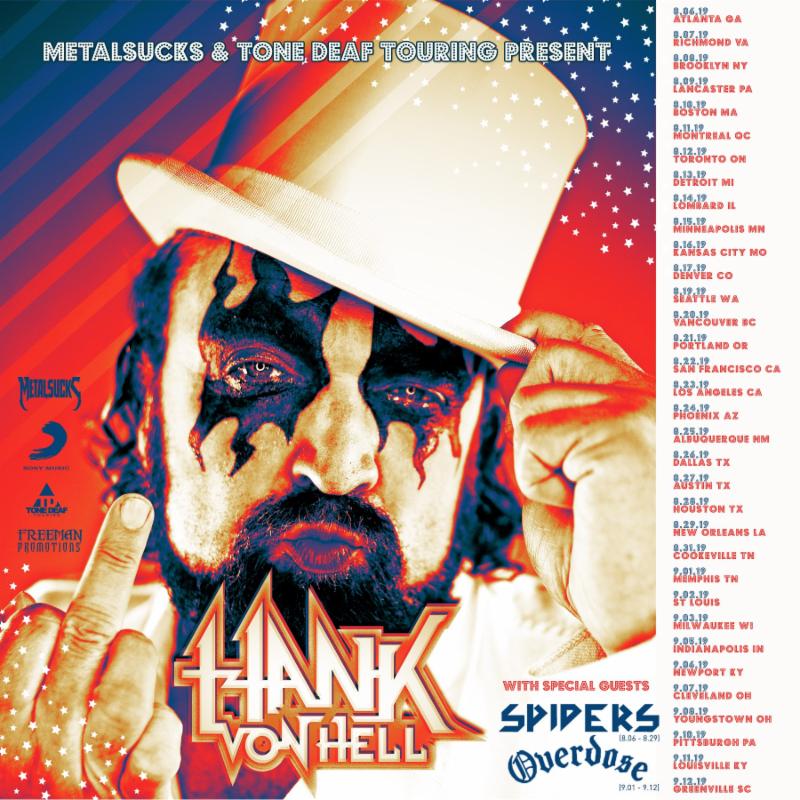 Presented by MetalSucks and Tone Deaf Touring, the Hank Von Hell 2019 North American tour will rock with hellacious force, reaffirming the singer’s standing as the King of “death punk” while introducing first time fans to one of hard rock’s most voracious vocalists and biggest bad boys.

The tour will launch on August 6th in Atlanta, GA and runs through September 12th in Greenville, SC. Find a complete list of dates below. Support on the first half of the tour will come from Spiders, the second half will see support from Overdose.

“It’s been a long, long time since I’ve toured North America. But now, the wait is finally over. I’m beyond excited to once again hit the stage in front of some of the best audiences in the world, and I can guarantee that the fans wont be disappointed. This tour is maxed out to the fullest, with a setlist that’ll make your heads fuckin’ pop. I’ll bring the thunder, you’ll bring the riot. Let’s party – Hank is BACK.”

Hank Von Hell who for 17 years fronted Turbonegro, the self-styled “biggest underground rock ‘n’ roll band in the world”, is known for his raucous ringleading, over-the-top personality and gaudy stage make-up that turns every concert into a party. Touring in support of his new LP, ‘Egomania’, Von Hell is set to prove, once again, that his formidable reputation proceeds him for a reason.

His highly successful comeback album “Egomania” was released last year, with the title track “Bum to Bum” featuring non other than Steve-O from Jackass fame in the video, resurrecting Hank from the dead and back to rock. Watch the video HERE.

The follow-up album to “Egomania” is due to be released in a very near future through Sony Music Entertainment.

Hank Von Hell is available to speak with interested media. To chat with the vocalist or attend a live performance, simply contact Jon Freeman at Freeman Promotions.

9/5: Indianapolis, IN @ Black Circle Brewing (ON SALE THIS FRIDAY)