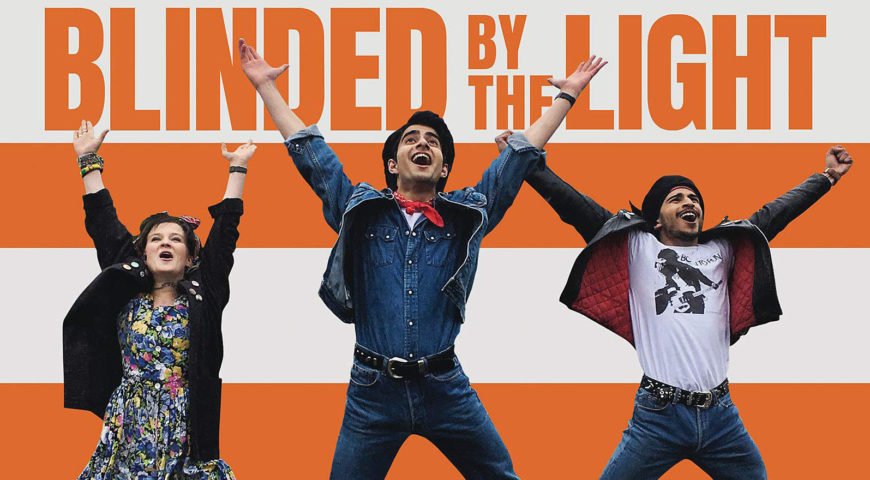 Blinded By The Light is a movie about many things. It’s about resurgent fascism, the immigrant experience, teenage coming-of-age, and the bonds of family and tradition vs. individualism. Ultimately, though, it’s about the transformational power of great music.

The main character, Javed, is a 16-year-old son of Pakistani immigrants growing up in the era of Thatcher in the UK in 1987 and 1988. He is based on Sarfraz Manzoor, who wrote the book and much of script adapted from it. He aspires to be a writer, but his ambition is strongly discouraged by his parents, particularly his father. His community, a small town outside of London, is buffeted by the NF (think Trumpian anti-immigrant neo-Nazis), and he his struggling to find his place, friends, and a girl. At a low moment, a Sikh friend slips him cassettes of Springsteen’s “Born in the USA” and “Darkness on the Edge of Town”. As he listens to the lyrics of “Dancing in the Dark” he is thunderstruck. He comes to feel that Bruce’s lyrics of working-class frustration and transcendence are speaking directly to him.

His love of Bruce leads him to change his style. Javed starts dressing like Bruce, wearing his hair like Bruce, and writing like Bruce. He is brought into conflict with his father, who keeps telling him that he will never be accepted as English, never mind American. His change in musical taste alienates his best friend, who is in an synth-pop band with some very amusing hairdos.

Like most teenagers, Javed is conflicted, and doesn’t always behave honorably. In particular he behaves selfishly and impulsively as his family’s economic status sinks, and his family struggles to survive and tries to pay for his older sister’s wedding. The scenes between Javed and his father have been seen before: In My Big Fat Greek Wedding, in The Big Sick, and in this year’s Yesterday. At least we were spared the scene of multiple Pakistani girls being paraded through by his parents.

A couple of nits to be picked: One of the songs we hear on Javed’s Walkman is a studio version of “Because the Night,” which was not available until 2010. Also, on Javed’s pilgrimage to New Jersey a sign shows him landing at Newark Liberty Airport. The “Liberty” wasn’t added to the name of the airport until after 9/11. These may seem minor, but as a Bruce fan and a Jersey guy they were annoying.

Ultimately, though, despite some cliches and discordant notes, “Blinded by the Light” proves inspiring and satisfying. A solid B+.