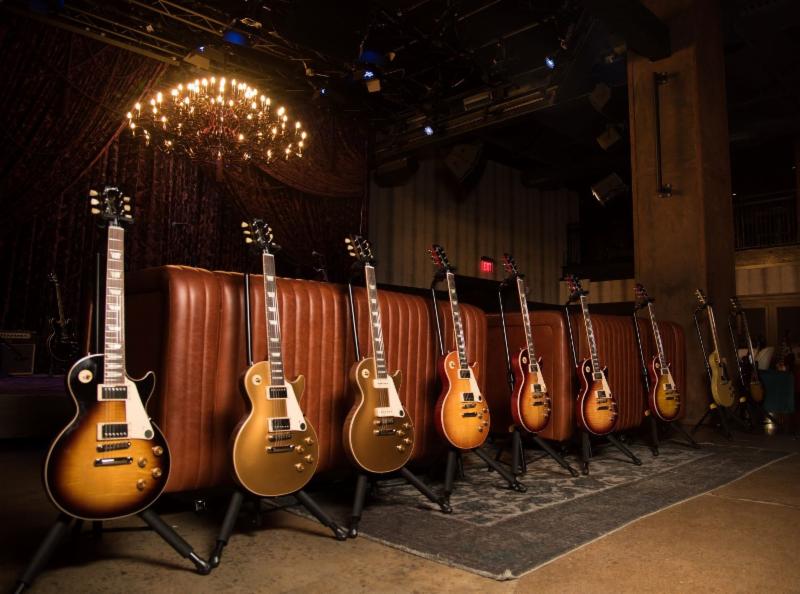 Offers Preview Of The New Gibson Electric Collection Ahead Of Worldwide Reveal On Monday, April 29

For the past 125 years, Gibson has been synonymous with creating, shaping, and owning sound across generations, genres and gender. This week (Tuesday, April 23), Gibson gave media and industry in Nashvillea sneak peek of the new collection before its official worldwide reveal coming this Monday, April 29.

Media and industry stopped by Analog at the Hutton Hotel to see a snapshot of the new electric collection, meet Gibson CEO and President James “JC” Curleigh and CMO Cesar Gueikian and catch a performance from The Striking Matches.

Check out the photos below from the Gibson: New Electric Collection preview event in Nashville. Stay tuned to Gibson.com on Monday, April 29 for the new collection announcement.

For more information on Gibson:

Gibson Brands, the world’s most iconic guitar brand, has shaped the sounds of generations of musicians and music lovers across genres for more than 100 years. Founded in 1894 and headquartered in Nashville, TN, Gibson Brands has a legacy of world-class craftsmanship, legendary music partnerships and progressive product evolution that is unrivaled among musical instrument companies. The Gibson Brands portfolio includes Gibson, the number one guitar brand , as well as many of the most beloved and recognizable music brands, including Epiphone, Kramer, Steinberger and Gibson Pro Audio division brands Cerwin Vega, KRK Systems and Stanton . Gibson Brands is dedicated to quality, innovation and sound excellence so that music lovers for generations to come will continue to experience music shaped by Gibson Brands. Learn more at http://www.gibson.com and follow us on Twitter , Facebook and Instagram .