Fully Recovered, Vol 2: A True Groove Compilation Given Another Look 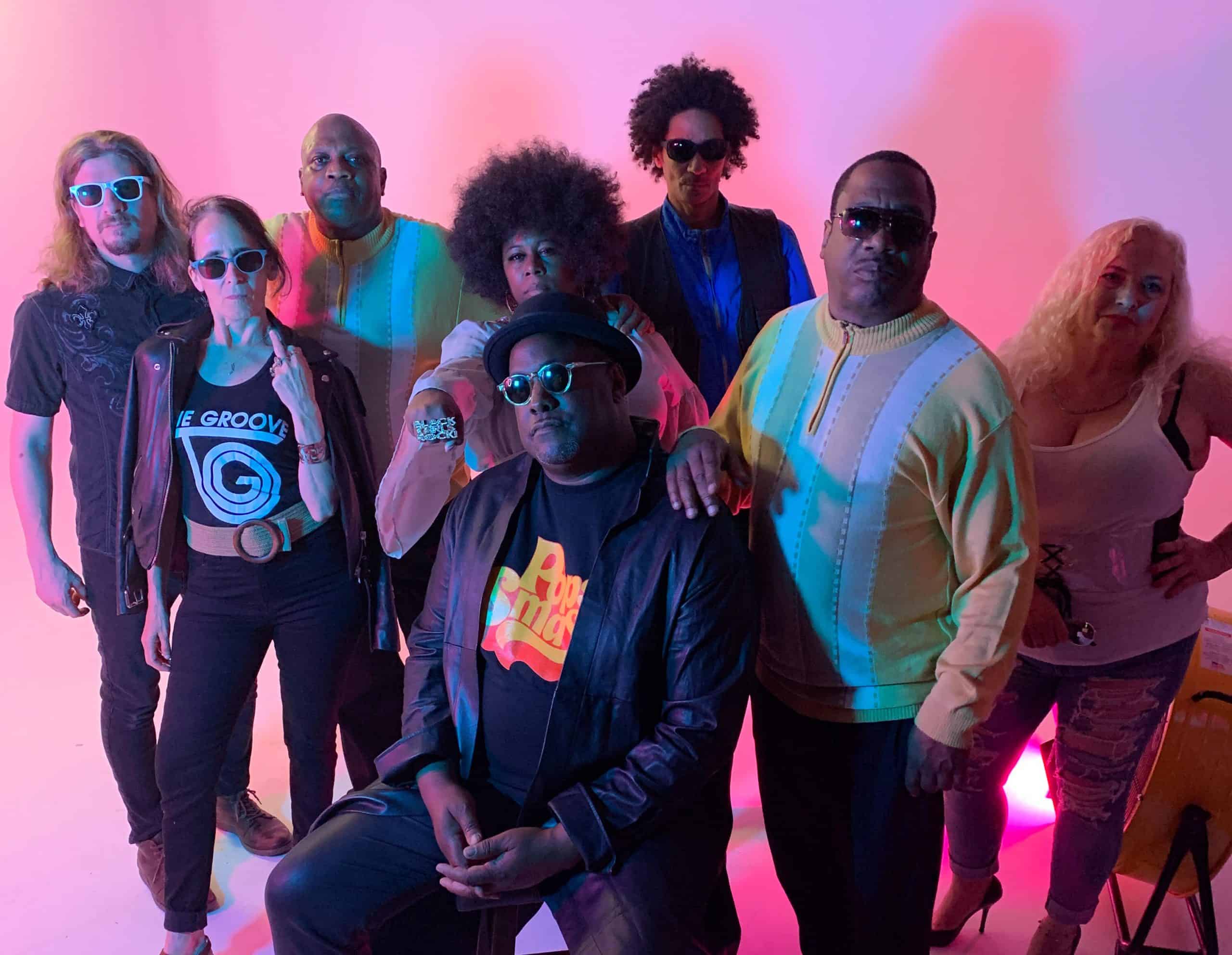 I realize that when it comes to True Groove Records, I’m not just a writer, I am also a fan, and also a friend. But I wasn’t always, and in 2015 I wasn’t as close, and yet since at least Power Of The Trinity I’ve been in awe of everything they’ve dropped, and this year they own three albums in my Top 25 of the year…

I didn’t include Wherever You Go – Tomas Doncker’s life in isolation benediction, I didn’t include the blues master Moanin’ at Midnight: The Howlin’ Wolf Project, a deluxe that includes some live cuts from  his legendary Blue Notes at Midnight gig, but I do include the all covers album because I couldn’t think of a decent reason not to.

Eight songs in total, the standard of covers is mind-blowing. I prefer it to Volume One if only because it is more daring to cover Grace Jones than Elvis Costello (well, Nick Lowe) and Curtis Mayfield. While Lael Summer is truly missed, and there is more songs on 2015, 2015 just can’t compete with 2020. If only for Tomas and Kismet Lyle’s take on “Umi Says” the album deserves to be considered among the very best of year.

I had planned to do a year in review about Doncker, and chose to do a review of Volume 2  (despite Alyson Camus’ excellent take here) as I decided it was a better idea to take a look at their roster of stars here…

Living My Life – True Groove All-Stars – The title track of the Chris Blackwell produced 1982 album is pure Grace Jones as she mixes funk with alt rock and dance hall in a martial throw down. True Grove share the verses and join together in the chorus, considering at the time it was recorded New York City was in lockdown, the song is a thumb in the nose of keeping your existence on hold, funkier than fuck it is a metallic cling of self-obsession. “Living My Life” isn’t on the third of Jones’ Chris Blackwell produced Bahamas bound albums,  it is a B Side, and while the album didn’t need it (you don’t need much when “Nipple To The Bottle” is your lead off single), it wouldn’t have hurt it. The True Grooves do a great job of bringing out its dichotomy, the song isn’t a natural anthem and the words don’t entirely suit the song, which sounds dark, True Groove embrace the frantic, bad news of living your life.

Satellite of Love – Marla Mase – I am beyond a simple fan of Marla, I’m a complicated fan but she is a a complicated artist, and ever since I saw her at Arlene’s Grocery, nearly a decade ago, I’ve been enthrall to her. In 2015 she performed an indelible “Hit Me With Your Rhythm Stick” that was so strong, Manny Pacquiao used it to train for a title belt match up with Floyd Mayweather. Manny lost, but it’s the thought that counts. Still, Ian Dury is easy compared with Lou Reed, the sing speaker at his gay highness Transformer period. When I heard about the cover, I had no idea how Marla could pull it off, maybe she could borrow Lou’s strap on from his cover art? Marla sidesteps the question of gender by settling on what the song is actually about: alone, at home, Lou and Marla like to watch things on TV and by tying the satellite to WiFi she takes the song from its original conception to something that expresses the nature of solitude at a time why consuming entertainment is its own pandemic of sorts…. and the bridge is just icing on the cake.

Paint It Black – Remastered 2020 – Regina Bonelli – Regina took the Stones “Paint It Black” off her 2015 breakthrough album, Love Letter. We already heard Regina at her best earlier this year, with Tomas on “I’m Gonna Run to the City of Refuge,” and really, anybody who doesn’t consider Regina the Queen Of New York blues, isn’t paying attention. The original “Paint It Black” took a sitar sounding lick, very mid-60s, into the charts with a dark, dark song. Regina under sings, she doesn’t overwhelm the classic rock song, but she savors her voice, and on a just about most difficult in class track to choose, nails it.

Umi Says – Remastered 2020 – True Groove All-Stars, Tomas Doncker, Kismet Lyles – Two years ago, I joined Tomas at the Parkside Lounge and sat in on rehearsal and it was the first time I heard his version of Moss Def (sorry, Yasiin Bey), “Umi Says” (Arabic for “My Mother” Says”) and was blown away. Anybody who knows Tomas well is aware of his deep and abiding love for his late mother and so one knows that he is seeing this as  a mother’s day tribute. The song itself is an anthem, the “all the people,the “shine a light” and Kismet Lyle’s very beautiful and moving harmonies, add up to a take that is better than the original.

Lets Go out Tonight – Kevin Jenkins – Jenkins is one of the best bassist out there, he is a mainstay of Shemekia Copeland’s band, as well as the True Groove All-Stars, a master session performer, and a renaissance man whose own tastes infiltrates both Jimmy Webb and Joni Mitchell. Now, if I was going to cover The Blue Nile I would have headed straight for “God Bless You Kid” but that’s why I am not one of the best out there. Continuing on his mutated Americana, he fleshes out the rhythm section without damaging the melody on “Let’s Go Out Tonight” making it a philosophy to be devoutly wished.

Badlands – Touchy Feely – Touch Feely is guitarist, chief engineer slash producer, utility man, and a major part of True Groove family, James Dellatacoma, if you ever get the chance to watch James and Tomas working together on a project in the studio, the two seem like a Vulcan mind meld, two men with but a single thought. Touchy Feely’s first album was last year’s glam truncated Title Huevo, and he returns with a cover of Bruce Springsteen’s “Badlnads” and it is a masterful re-conceptualizing of the song, away from the heartlands and into the mean streets, it has a 70s pop, glam, trash and vaudeville vibe. The result is a negative, he steps on the melody, but his reward is a cultural lynchpin of a song that seems to be staring out the window at a New York City in lockdown, and imagining itself out there again.

Could You Be Loved – Remastered 2020 – Sam Huber, Garrison Hawk – Finnish soul man Sam Huber has a powerful  voice that shakes in lower register as though he is a relation of Solomon Burke. He uses it, but not all the time, and 2020 has found Sam releasing the excellent Gravity Insanity (which was high on my list of best albums of 2020) and a new national anthem, “Me And My Brothers”. This version of Bob Marley’s “Could You Be Loved” comes from the EP of covers Sam released in memory of his mother last year, Songs For Mona. It is his second song featuring Garrison Hawk, the Jamaican dancehall star, and while Sam sings the song with a quiet desperation, Garrison slows the song to a learning to crawl. It is an excellent take that continues from its reggae roots to its soul roots.

Doesn’t Make It Alright – Tomas Doncker – Doncker’s father was large in New York politics, leaders of New York’s black community would meet at his parents home to discuss strategy. This remains, though not as community outreach, with the son You can hear it bubble and explode in Trapped… In The Mess We Made, and you can hear it in the soulful, more deeply disappointed that angry, cover of Jerry Dammers Specials song “Doesn’t Make It Alright” -changing it from Ska to a tangent blues so powerful Dave Wakeling of the English Beat -who performed it many times with The English Beat, to reach out give it acclaim as the best take he has heard. Doncker spends the song simmering in sadness and anger that 40 years after it found life on the Specials debut album, nothing has ever changed a bit. You can hear it in the way Tomas draws out the title line hook, till it could break in two.

A fitting end for an album that makes the listener meet it, and when you do it becomes a perfection snapshot of life today.