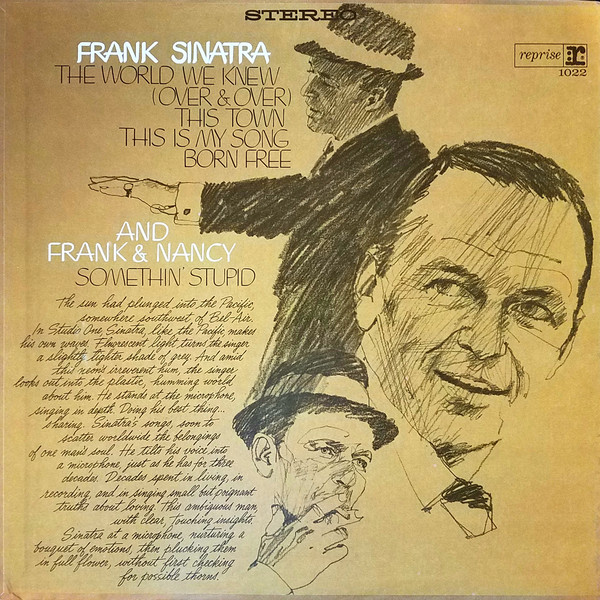 No, “Don’t Sleep In The Subway” is not Frank Sinatra’s worst performance through the summer of love (1967) remember “What America Means To Me” (here). But in at least one way it is worse, the song by the great Tony Hatch and Australian Jackie Trent, was given the recording of a lifetime and a smash hit by Petula Clark (I saw her perform it in 2012 at Feinstein’s here) in April of 1967, and  was followed by Frank Sinatra on his 42nd album The World We Knew in August 1967 and why did he turn it into a swing track? How did he misplace Petula’s heart? Why change “darling” to the much less effective “baby”? The thing about “Don’t Sleep In The Subway”  (beyond it’s New York bias) is that Petula sings it with a small smile of anticipation, because she knows to slightly tease the man’s “foolish” pride. She understands him and she sings right to him, it’s a song with a punchline, with a happy ending. Petula is man enough to deflate her lover and also to inflate him, to bring the relationship to the very top by being in charge of it. All of it is lost on a singing sixties nightmare take, with back up chicks, and the worst improvisations Sinatra has ever done. Ever. It is awful, with a silly coda he should not have sung. . And it is the worst moment, though the “Some Enchanted Evening” is nearly as bad. All these updated versions are mind bogglingly misjudged. why turn “Some Enchanted Evening” as a Ramones fast horns ablazing mistake?

Obviously, Sinatra is updating his sound for the marketplace, and it worked, the album, raising to the top of the charts on the back of “Somethin’ Stupid”  -a song that spent months at # 1. “Somethin’ Stupid” was written by Carson Parks and recorded with Carson’s wife in 1966, Frank heard it and sent it to his daughter Nancy Sinatra’s musical maelstrom Lee Hazlewood  (“Part Henry Higgins, part Sigmund Freud”), Frank recorded the song with Nancy in February 1967, the same day as his final sessions with Carlos Jobim. Despite the incestuous angle of a father and daughter singing it together, the song is not just the true update of his sound, not simply a huge hit, but a thematic update, and while that isn’t Jobim on the acoustic guitar intro it is probably Glen Campbell. But what makes it is the duet, Nancy sings it flat, leaning on the pacing, Frank carries the melody in his back pocket, and the lyric is proto-post-pill feminism. It is, really, Sinatra who is left alone “if we go somewhere to dance I know that there’s a chance you won’t be leaving with me”. It takes the rat pack and sticks it in our ear. Clearly, a great moment.

As for the rest of The World We Knew? The straighter Frank plays it, the better it is. And it pays off with a coupla of one for my babies like “Drinking Again” with a its smooth and sweet piano based song, all 60s trappings gone. The dark strings of “You Are There” is another winner. But does it offset “Born Free”? I say just about, and then “Somethin’ Stupid” puts it over the top.