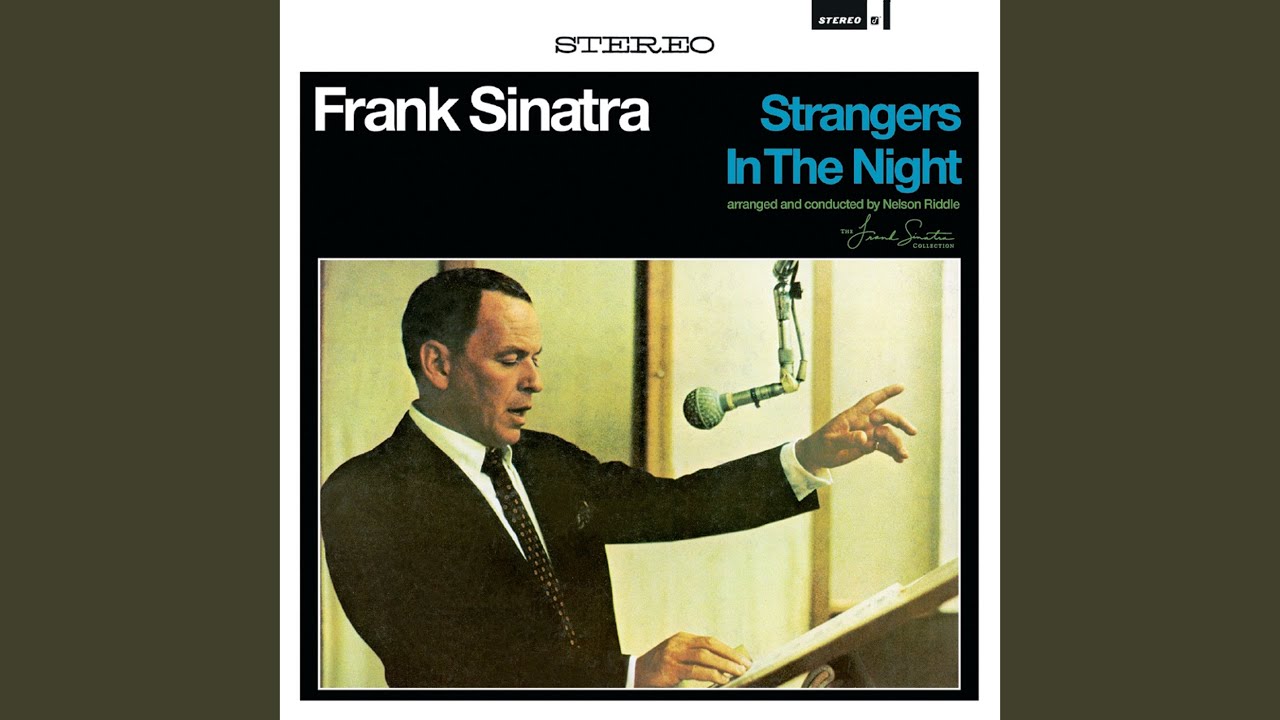 Talk about going out on top… 1966’s Strangers In The Night, Frank Sinatra’s 38th solo album, was also his final album with arranger/conductor Nelson Riddle and his orchestra (Riddle also co-produced). It was a commercially successful attempt, artistically tepid, attempt to update Sinatra by mixing middle of the road pop tunes with the Great American Songbook and providing Sinatra sound that less updates and more absorbs the mood of the country. The hippies were the the hippies, the generation gap was the generation gap, but there was still the majority of the country, the silent majority, a little tired of the songs from the 40s and 50s, but still wanting a quiet riot of their own. Strangers In The Night is his only million seller not tied to the Christmas season.

It’s a goodish album that manages to flounder, opening with the title track and followed by “Summer Breeze” Sinatra heads off in a different direction than usual but doesn’t sustain it. And though hurt by a mediocre “Downtown” ( which includes the worse note he hit, a jump up on one of the final downs) a fair “Call Me” and indifferent takes on the classics. “Strangers In The Night” (based upon an instrumental by Ivo Robić and Bert Kaempfert with English lyrics by Charles Singleton and Eddie Snyder. Kaempfert originally used it under the title “Beddy Bye” according to Wikipedia here) is why it sold so well and garnered two Grammys, Best Vocals (which I’ll buy) and Record Of The Year in the same year The Beatles dropped Revolver -clearly preposterous.

“Strangers In The Night” is a very good mainstream pop moment, with no electric guitars or hard drums, it is a gliding track with Frank at an easy glide, he emotes carefully and embraces the love at first sight that evolves into something, you can imagine Frank in the same bar he sang “One for My Baby (and One More for the Road)”. The song is a phenomenal pop manufactured hit, with the hook  (the strings that open the song) exquisite and the instrumental bridge expanding upon what you want to hear, and the scat on the outro having you listening to it again and again. The new love and eternal love subject line is not a perfect match for Frank, when he isn’t completely enamored of a sentiment (think “Love And Marriage” and “High Hopes” playfulness) he leans back and smooths the feelings over. In pop, as opposed to in art pop, the smoothing over eases the transitions. It is  welcoming and even a clunker line (“it turned out alright”?) isn’t infected. I seldom listen to it, and prefer the duet with his daughter that would arrive in 1967, but I don’t actively dislike it.

The very next song, “Summer Wind” is on a tier with “It Was a Very Good Year”. I first heard it 13 years after its release, in 1979. I had just moved to the States and it was on repeat at the bar where I worked the night shift. More than “Very Good Year,” Sinatra is dealing in nostalgia, a romance that is long over and whenever the wind blows the sensation reminds him of the lost love. The actual song, like “My Way” and “Strangers In The Night,” is from Europe with re-written lyrics, but it has shed its Teutonic elegance and becomes a fable for the summer. During my first summer I was dating an American girl (can’t remember her name) who was way out of my league, and as we dated through the heart of the summer, mid July to early September when she stopped returning my calls, the song played as a warning, a foresight and a self evident truth.  Sinatra’s skill here is an actors skill, it is the memory not recollected but seen again like the first time , the same way an aroma, a woman’s perfume, can take you back the summer breeze takes him back. One of his greatest moments, the ache on the song is glorious and though it wasn’t a single and wasn’t a huge hit (#1 on the Easy Listening charts), the lyric was by Johnny Mercer (who also wrote the lyric to “One For My Baby” incidentally) -and was Mercer’s final top forty hit. It remains a song impossible to get tired of. A true masterpiece and Frank’s best moment of the 1960s and as good as everything but his very best moments in the 1950s.

Nothing else works entirely though Frank could sing anything and make it commanding, but there is a special place in hell for his “Downtown” which includes a borderline racist interpolation of Asian temple bells, and except for all that What America Means To Me guff is possibly his worst recorded moment. “Call Me” is neither good nor bad, it is indifferent. Same goes for current (at the time) show tune “On A Clear Day You Can See Forever,” 30s Rudy Vallee novelty “You’re Driving Me Crazy”. Nelson’s arrangements aren’t sticking and you can hear why Frank moved on after this album. “All Or Nothing At All” doesn’t compare to Sinatra’s 1939 version.

So, more or less, two great sings at the top and nothing that great, but only “Downtown” is an insult.

Better was to come and soon, the following four albums were all goodies…