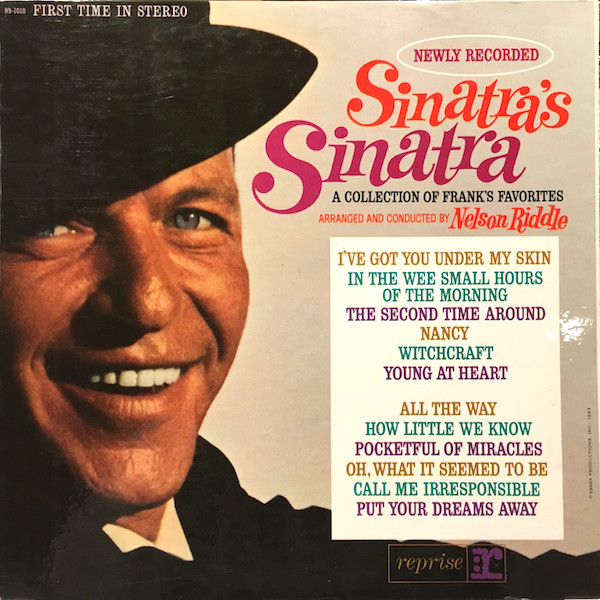 Of all the Sinatra stories you’ll hear, perhaps the most telling is that as Frank signed contemporaries to his label, he gave them contracts whereby the likes of Dean Martin and Sammy Davis Jr. got to own their own masters. That alone would have made Reprise Records a worthwhile enterprise, but it was a worthwhile enterprise anyway, and it gave Frank complete artistic freedom.

Not unlike Prince after him, Sinatra’s post-Capital recordings simply weren’t as good as the Capitol years were, but they were plenty good: freedom wasn’t enough. And among the things Frank did with his hard earned freedom was to re-record his Capitol hits, supposedly because he wanted them in stereo, but essentially to wrestle control of his catalog away from Capitol. While smart enough in theory, even the return of Nelson Riddle couldn’t hide the self-evident: the original recordings were superior in just about every way. This became clear on  his 28th solo album, 1963’s Sinatra’s Sinatra, twelve songs, two new ones, ten new rerecording of songs from the catalog. Sinatra in fine voice, the arrangements impeccable, the new ones, “Pocketful of Miracles” and “Call Me Irresponsible,” minor additions, but two of the new oldies as big as you can possibly get, “I’ve Got You Under My Skin” and “In The Wee Small Hours Of The Morning” are the essence of the legend that is Frank. “Skin,” a Cole Porter classic given an indelible arrangement by Nelson, and “Wee Small,” the definition of unrequited love, are at the center of the legend that is Sinatra. If Sinatra’s Sinatra was a live album, where you give up brilliance for spontaneity, well, alright, but as a straight re-recording both versions are just, plain not good enough.

The Reprise “Skin” has a strange, buzzy string sound, he phrases it a little off the beat, improvises words almost randomly, the opening orchestration includes an undertow that doesn’t quite work, and Frank’s vocal, for all its splendidness, functions against him, clipping off words, and stretching out the wrong words, he speeds a little on the bridge and when he reaches the moment we’ve been waiting for, the bursting through of the horns it is therefore a little flattened out, Just before that, on Capitol he stretches his “little fool” to the breaking point, on Reprise he seems to be hurrying himself along. Then on Capitol, he stops for a heartbeat after “stop” and on Reprise he doesn’t. He screws up the build up. I’m not nitpicking at all, we are discussing a great work of 20th century art, Sinatra had to be perfect and he isn’t.

I don’t care if major songs re-recorded here are not as good, “Young AT Heart,” “All The Way,” “Nancy,” even “Witchcraft”: none are as good as the originals but if Sinatra wants to own his own masters, consider me all in.  “Skin” is different and the original “Small Hours” is an achievement of huge proportions, it is the essence of greatness, it is art as pop heartbreak and it stands 70 years later as something no one else can achieve. Nearly impossible to replicate, and Frank tries and fails. He lacks the callowness that made the original so powerful, Frank was just hitting forty when he first recorded “Wee Small,” but it was a young man’s album and song, its dramatic downturn was conflated by youth, the pain so palpable, it couldn’t be real: they were Sinatra’s songs of infatuation, born to end. Sinatra’s Reprise track is a touch louder, not hugely, but enough to make it seem wrong, pushy. The Capital version was built around the piano, the Reprise around strings, and Frank sounds weary in 1955, and in 1963 there is a distance between himself and the words, the vocal is third personal singular, observational.

I don’t blame Frank for the attempt, I blame him for the failure. In April of 1994 I saw Frank at Radio City Music Hall, the only time I got to see him in person, and he could still swing it, and he swung “I’ve Got You Under My Skin” and the entire orchestra (30 piece, I believe), and the evening seemed to drift forever forward. I went with an Italian girl who was engaged to be married, and I never saw her again, but in that moment I reached for her hand and every hope and dream exploded in my heart. That’s the Capitol version. That’s the genius that is Frank Sinatra.