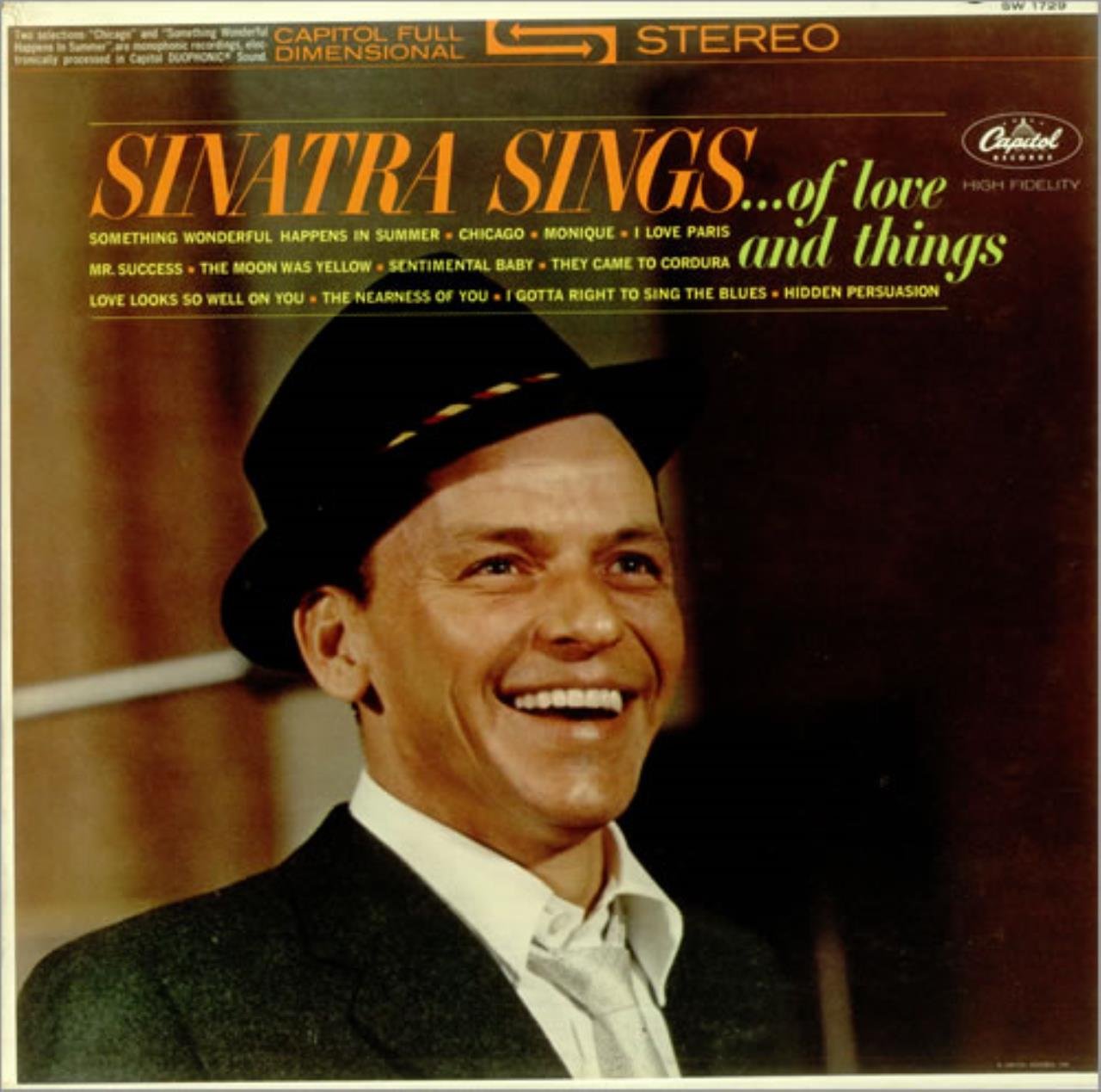 Album # 23,Sinatra Sings of Love and Things, is  a compilation from Capitol, an older school version of Meaty, Beaty, Big, And Bouncy, not hits but B Sides and singles, and in 1962 what it proves is that by 1962 Sinatra had passed his prime. This is so much better than his  Reprise albums, the only reason I can imagine is because Frank just wasn’t as good once he left Capitol: To use a baseball analogy: he’d lost a couple MPHs off his fastball. Not terrible, he wasn’t getting clobbered (and he never would) but listening to these B Sides and singles, and not even his biggest B Sides and singles, it is instantly clear that fine albums such as his earlier in 1962 Sinatra And Swingin’ Brass  are not AS FINE, they don’t reach that Sinatra untouchable place of pure emotional genius.. As Sinatra moved his catalog, slowly but with extreme concentration, from Capitol to Reprise Records by recording the songs again, the newer versions aren’t as good. The arrangements are similar and the arranger Neal Hefti was clearly first rate, but Sinatra was popping into the studio for two days to record the entire album: perhaps not phoning it in, but Sinatra is proof of the greatness of being ultimately prepared, that even the greats need to work at it. .

So part of the problem with his Reprise recordings  is a lack of discipline on Sinatra’s part, part is lesser arrangements, and part is the aging process. The proof that Sinatra had peaked (for the most part) is on the excellent Sinatra Sings of Love and Things, an album without a center of gravity and whose highlight (“Chicago”) occurred well after the fact, with twelve songs of second tier material by first tier writers like Sammy Cahn, Fred Ahlert,  Alan Bergman, and more. There are a coupla ringers, “I Love Paris” and “I Gotta Right To Sing The Blues,” but mostly these aren’t the songs you think of, yet even so, Frank is beyond impeccable here, his relationship to melody so close by, is tender and temperamental dreams of look but don’t touch, but the miracle is they are a hodgepodge that through the power of his personality click into place. Nothing will ever convince me Nothing will convince me that “Something Wonderful Happens In Summer” is a great song, yet the mood is so complete, it has a dreamy late evening feel where the summer breeze is just being hinted at.

“The Nearness Of You,” “Hidden Persuasion,” “Love Looks So Well On Ypu” -none of these are parts of the canon, none of them changed the ciirection of 1950s pop, so how do they hold up s sturdily” Sinatra gives them as much conviction as he gave “I’ve Got The World On A String”. The future would find some of Frank’s great collaborations, Count Basie,Duke Ellington, Antonio Carlos Jobin are waiting ibn the wings, and some great concept albums, Watertown bring the best of them, he still had definitely busy 1960s and 1970s to go, though the 1990s were a little quiet, nothing is over here. That isn’t the point is. The point is that the Reprise years were just… a little bit behind for the most part. Or, to put it another way, the best wasn’t really yet to come,