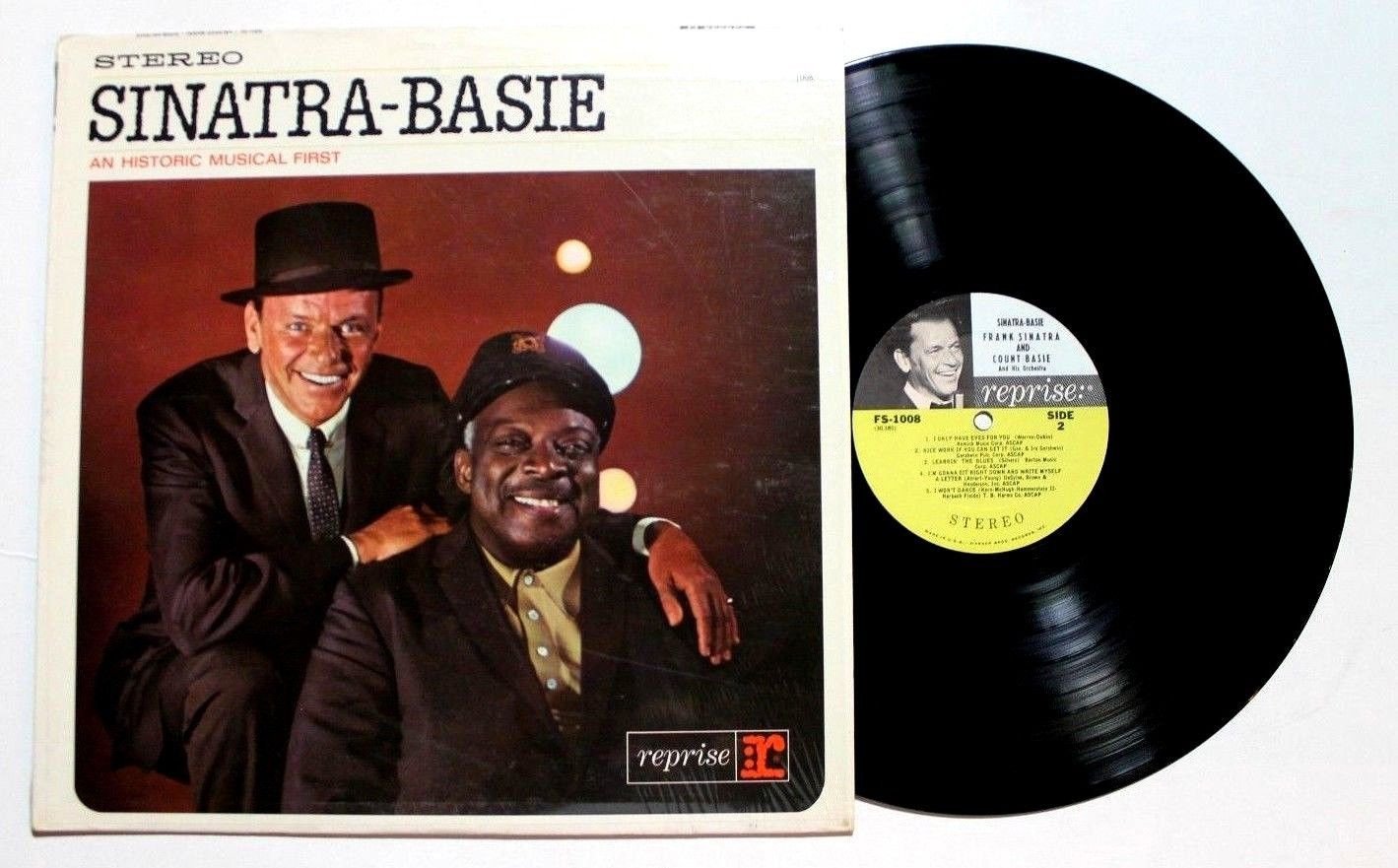 If you want to know what the difference is between swing and jazz, listen to bandleader Count Basie: he swings.  Basie was a pianist but not a pianist first, he wasn’t Nat King Cole or Oscar Petersson, but rather, an accomplished pianist but a bandleader first who, for over fifty years, let his big band swing from the drums and bass. Frank Sinatra was also a jazz guy, moving from indigo blue to bright orange and when having a bright orange swingin affair, he could just blow out dance music with absolute ease. A little later on, Frank would become a MOR artist but Basie would never change. However, in October 1962, they were clearly on the same page, so much so that the news that Basie didn’t play piano on “Pennies From Heaven” comes as no big shocker or concern. Basie was 58 years old at the time, he was gonna do what he did and it was gonna be what it was. And what it was was album # 26, Sinatra-Basie: An Historic Musical First, the Basie Orchestra lets Frank swing all over em.

In effect, this means “I’m Gonna Sit Right Down And Write Myself A Letter”  is performed at double time, fast, smooth, fun, shallow but how can dance be shallow? The Count Basie Orchestra are professional to a fault, imagine if your ex became a hooker and you paid her for sex… expert yet also good clean fun, it isn’t heartfelt but it isn’t business as usual either, And there is a syncopation between band and Frank, a meeting of minds where Sinatra absolutely got how to play with these guys, how to let it all hang out. Basie could read music but he didn’t want to learn new songs, so Bill Miller, official contractor and pianist, took the role when Basie didn’t want it. It just doesn’t matter because it was about a band aesthetic,

What does matter is drummer Sonny Payne, who elopes with Frank on song after song, he is a powerhouse and he is the center of the album, he is where it all stems from and goes back to, This isn’t Frank the drama queen, it isn’t Frank the lovelorn, this is Frank the dance machine, The first of three meetings between the swing icons, it is a cool groove album, brimming with Camelot’s self-confidence and a world that we can not imagine right now (though we can hear it). There is nothing not to admire here, Eric Dixon’s flute on “I Won’t Dance,” and his solo on “My Kind Of Girl,” the post-Great Depression “Pennies From Heaven,” the zoom, amused “(Love Is) The Tender Trap”. every song is fine and while it may seem a little too casual, nobody is sweating it so you can hear (though the Band rehearsed long and hard for the recordings).

If I have given short shrift to Basie here it is because he let’s his band perform under his tutelage with calm and assurance, he disappears into the band, even his piano (when it is him playing), is one of many instruments. Basie was a band leader, he was in his element directing his team of greatest of all timers, So the best thing about Historic, is how unhistoric it feels. how much fun it is, how it puts no pressure on the listener to do much more than dance along. Sinatra’s singing is beyond smooth, he glides through the album with absolute ease and smartness, as though he is on top of the world. It is the the opposite of his last album: Great Songs From Great Britain is hurt by Frank’s discomfort and Historic is made by his easy pleasure in performing with such completely great musicians. He gets it.

Frank was always a seducer, he got the girl through song on his swing stylings, but here he is a charmer and a kidder, he gets her through making her smile, through making her happy, through holding his heart as a play thing. A comparison here is Sinatra’s Swingin’ Brass album, from six months earlier (my review here), the off handedness of Brass is a type of laziness, and on Historic, the slip slope of swing is easy because it is so well understood that it doesn’t need to push, far from being lazy it is there because it is understood completely. Of the fast ones, his best since Swingin Lovers.