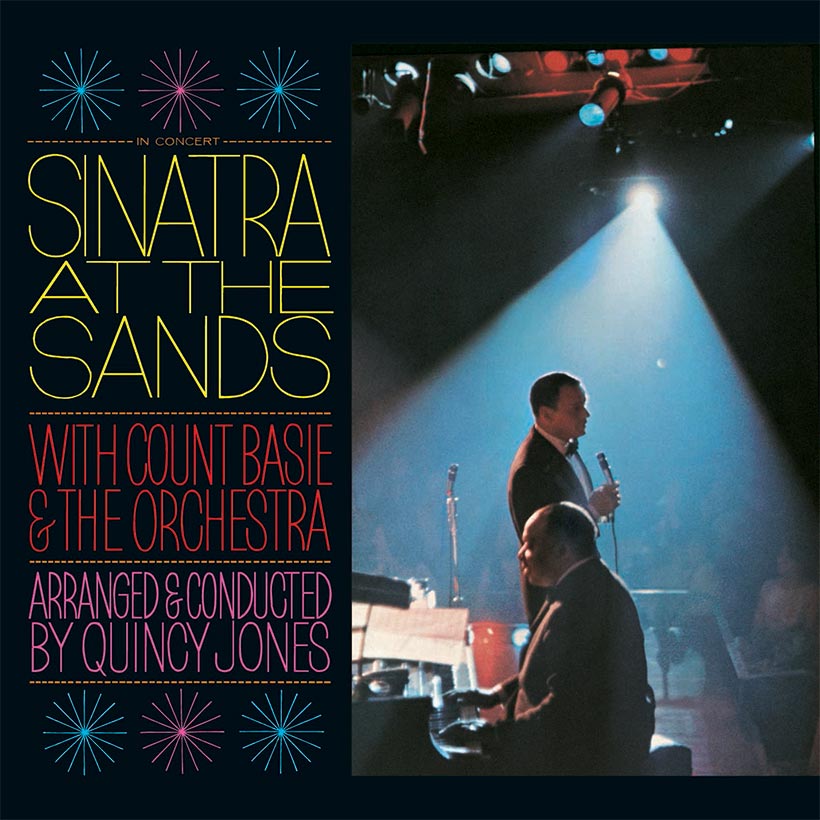 In 1994 I saw Frank Sinatra’s final stand at Radio City Music. That was it for me and the Chairman of the Board live on stage, I hadn’t seen him before and he seldom performed after,  but whatever age had done to the greatest singer of the 20th Century, it hadn’t lessened his charms, his skills, his execution, and while his voice was shot, his phrasing was immaculate. The set, despite a different set list then this 1966 live album, recorded over seven days at the Sands, came from the exact  same DNA and  blueprint  for Sinatra’s concerts over 25 years, even the Main Event used that template.

Though, the real template, the real way Sinatra performed his catalog was set in place two years earlier with an also live but in front of an invited audience CBS Special A Man And His Music (here), which included Quincy Jones arrangement of “Fly Me To The Moon”. Sinatra’s seven day residency was named “The Man And His Music,” surely more apt.

It isn’t a flat out masterpiece though it skirts awful close, of his two greatest albums (Wee Small and Swingin’ Lovers) only one song is represented while we get a lovely but unnecessary “The Shadow Of Your Smile” and “Street Of Dreams,” a seriously mistaken “Get Me To The Church In Time” and a misguided swing take on “When Or Where,” and worst of all the comedic monologue  “The Tea Break” with some racist jokes about Sammy Davis, Jr. I know they were close, and I know Sinatra stood behind his friend after Sammy married a white woman, but lines about him being hired at the Sands to clean the rooms isn’t funny now and probably wasn’t very funny then. The best joke is the Rat Pack buddy as lush: “Dean Martin has been stoned more often than US Embassies” . It gets the biggest laugh as well.

Everything else is absolute perfection. The “I’ve Got You Under My Skin” is proforma and the “One for My Baby (and One More for the Road)”  stands as the best version you will ever hear,  and they lead the way on a tight, well sung, timeless work of pop culture that functions and very much so as a concert, as it is performed, as it plays out in real time. . When Sinatra swings he is full of a sexy joy in his very being, when he sings a ballad like “It Was A Very Good Year,” the aging of a man as seen through his romances resonates for the 50 year old superstar at his peak: it is so touching and melancholic and reveled in loss.

The swingers are bangers every one, backed by the Count Basie Orchestra who were long past their improvisational 1930s and had become a tight as a drum swing 17 piece,  this was Count Basie’s third album with Sinatra and, arranged and conducted by the Zelig of pop Quincy Jones, it was at Sinatra’s service all the way through. The orchestra got three solos, the sprint through “One O’Clock Jump,” “All Of Me,” and the jumping “Makin’ Whoopee”. After decades of listening to orchestras spend an hour on stage before the headliner joins them (hi Ray Charles), three songs like this is a lesson in less is more.

Recorded over seven nights between January and February 1967 at the Copa Room, and released into the summer of love where it competed against Are You Experienced? Sgt. Peppers, Disraeli Gears, Surrealistic Pillow, it could be considered a sign pointing to Richard Nixon, the silent majority had an album that wasn’t country but rather urbane, sophisticated, and speaking to the Greatest Generation and not the Generation Gap. It was a three

That was then, now the backdrop matters much less. Now, it feels like (and I am here to confirm that it certainly is) the Sinatra live experience on a great night (well… seven great nights), with what Satchmo used to call the good old good olds. Also, there is a certain sadness about it, how can music so alive be made from people who have left? The past is recorded but it comes back to us. Just the same way last year was recorded but we can only reach the feel of that time through recordings. It reminds me of another dead pop star, Mark E. Smith: “Step forward for ESP medium discord”. The songs echo through to us. It was a very good year…. for Frank’s 39th album.