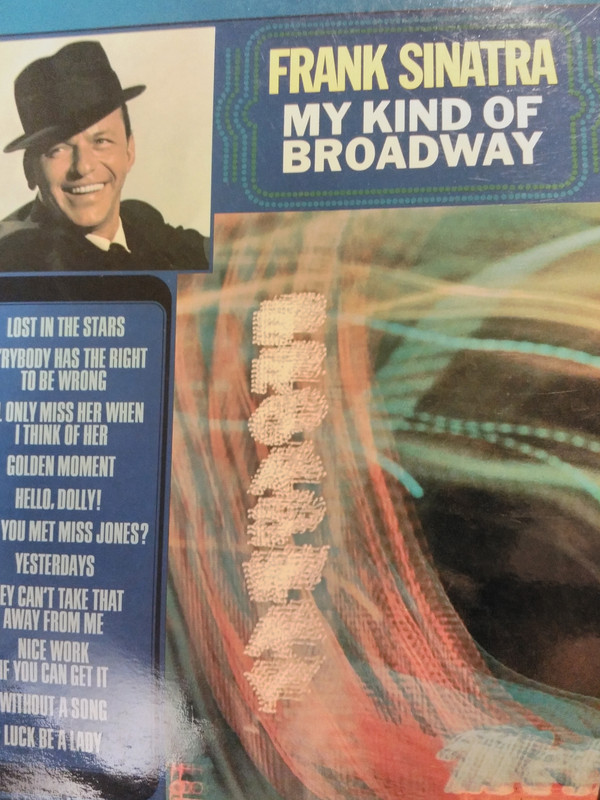 It is 1965, Frank had recently released one of his masterpieces, September Of My Years (here) and was back with album #35 where Broadway show songs recorded over four years at numerous sessions but never released were aggregated for one album with nine different arrangers and composers, aka  My Kind Of Broadway. Reading AllMusic’s review (here), I empathize with their assessment: a mediocre album of standard’s standarded, but even so there were many moments I enjoyed enough to lift it to a  strong collection.

Obviously, “Luck Be A Lady”, which Marlon Brando sang in the movie “Guys And Dolls” where Frank played the gambling bad boy, marriage a feared Nathan Detroit who didn’t get the song, though Frank got some great ones, just not the greatest one. On My Kind Of Broadway Frank gets his own back on Frank Loesser, singing the guts of it out in a terrific, classic take. If that is great, hearing Frankie shout out his “High Society” friend on “Hello, Dolly” (“blow your horn, Louie”!) with the Count Basie Orchestra and Quincy Jones arranging and conducting, is enough to blow you away:  between those two songs and even if everything else sucks, good enough for it to be a mediocre album, they are simply too big not to matter.

But there is more.

And now I am going to cheat. Trying to get a sense of distance from my perception I went in search of other  takes and found a great one. Ron Fassler’s review from 2017 is immediately the one to beat (here). Here he is on a man I’ve never heard of:

“I looked up Torrie Zito and was pleased to see that (among other career highlights) he was responsible for the string arrangements on the classic John Lennon album, Imagine. Nice.” Torrie conducted the first two songs off the album, the single, a really strong one that did no business, “Everybody Has The Right To Be Wrong”  and a song I have never heard before, the dramatic and gorgeous “Golden Moment” off a musical adaption of the old (not then of course) precursor to soap operas everywhere “Picnic” remodeled as a musical “Hot September”  that never made it to Broadway. Two wonderful songs and that makes FOUR.

The problem is the ones that don’t really happen: Kurt Weill’s “Lost In The Stars” -arranged and conducted by Nelson Riddle, is an uninspired slog, “They Can’t Take That Away From Me” -the Gershwins at work, isn’t even from a Broadway musical, and is completely flat, “Yesterdays” is a lovely song (from the show that brought us “Smoke Gets In Your Eyes”)  is overdrawn strings though a good vocal.

No, My Kind Of Broadway doesn’t swing as a single concept execution, coming right after Sinatra’s Autumnal all of piece work, it is a mess, it doesn’t connect as an artistic statement, the versions aren’t the best of class, and Sinatra’s presence isn’t the tower of power it can be.

But it is a good album, and its best songs are great. In a different timeline, the Beatles were releasing the UK Rubber Soul.