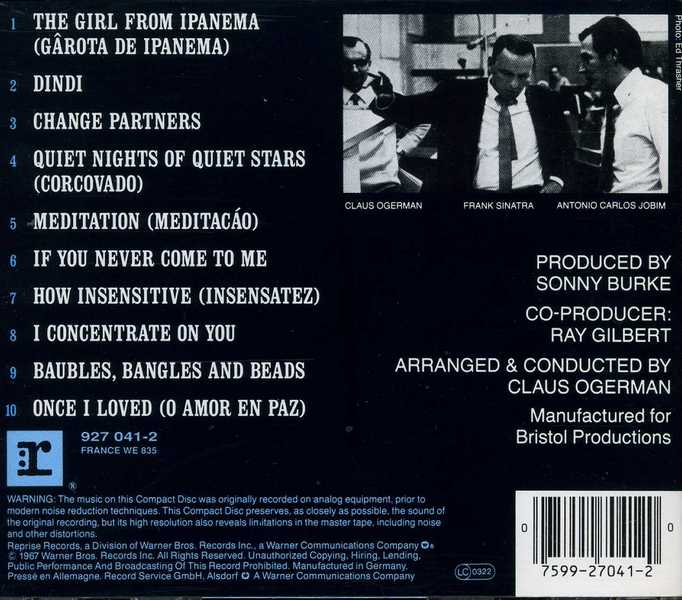 Bossa Nova is to Samba what Latin Urbano is to Reggaeton, and while that isn’t all that accurate (Bossa Nova is one genre, Latino Urbano is many), the concept holds in the broadstroke. Translate Bossa Nova from the Spanish and you get either New Wave or New Charm, and both are pretty accurate.

And keeping to the broadest of strokes, Bossa Nova slowed down Samba and took its rhythm from the tambourine, it was quieter and more melodic, more harmonic and a breach of jazz as a component. By 1964 Stan Getz added jazz sax to Brazilian guitarist João Gilberto’s compositions  and along with a handful of songs by Antônio Carlos Jobim, including gamechanger “The Girl From Ipanema” and created a worldwide phenomenon.

While leads us to Frank Sinatra’s 41st album, Francis Albert Sinatra & Antônio Carlos Jobim, a hugely successful genre album that spent 28 weeks on the charts and with Sinatra’s excellent take on “The Girl From Ipanema,” a song that is as big as it gets, even sampled on a Bad Bunny track earlier this year.

There is an excellent review by Nate Chinen on NPR on the occasion of the album’s 50th Anniversary (here), and I agree it is a terrific album and for a man with ego of Sinatra it suppresses everything you know about the big band singer, everything Frank does here has to do with the bossa nova rhythm, and at his loudest, “Meditation” his voice is smoothed and modulated to the melody and quietly stays on top of the songs. It is an ultimately genre album, “How Insensitive” has an iota of Wee Small Hours but that is a rarity because it is bossa nova yes, but the quietness leads you back to Frank’s quietest singing to date, it plays in the background of your heartache. Meanwhile “Change Partners,” “I Concentrate On You” and “Baubles, Bangles, & Beads” from Kismet are given new arrangements (according to Wikipedia Guitarist Al Viola played on “Change Partners” due to Jobim’s difficulty with the track), they are American standards re-conceptualized with an orchestra doing the difficult: keeping it at a low thrum.

Listening to the album today, Sinatra is a magnificent singer, the sound of his voice is the same, but the tempo, the stretch, the Sinatraisms, are not there. Instead he comes together with Jobim and between them they find a place between jazz and samba, and Sinatra sings to that that. Here is another great review from a writer I’ve long admired on AllMusic Stephen Thomas Erlewine (here).  His voice is such a caress, such a sensual eye blink, that the album follows.

The Bossa Nova was a dance craze and Latin Trap wasn’t, but Bossa Nova didn’t really take off despite it’s simple beauty and sexiness as a dance, tailor made for slow dancing, have a look:

Bossa Nova the dance is slow and lovely and in 1967 it was sexiness for adults in sharp relief to the art-rock (Sgt Pepper beat out Sinatra-Jobim for  the Grammy’s best album of the year), Sinatra was offering, not for the first time, sexuality for grown ups, and Jobim exemplified that glides through you. Elvis Presley would speed it up with “Bossa Nova Baby” (four years earlier) so it became the twist, but it didn’t stick either.

It never became the twist but the album is an important part of the Sinatra myth and 50 years later, Jobim is being sampled by the top Latin pop artist. The timeless album is an act of new charm that seduces still. Not one of Sinatra’s greatest, but not far off the mark.