Frank Sinatra’s “Days Of Wine And Roses, And Other Academy Award Winners” Reviewed 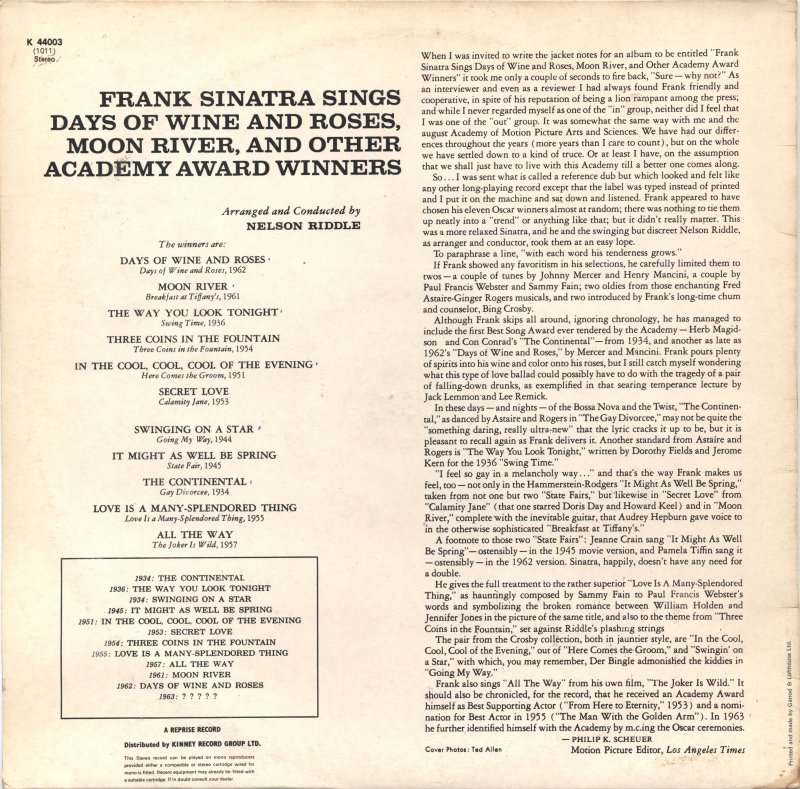 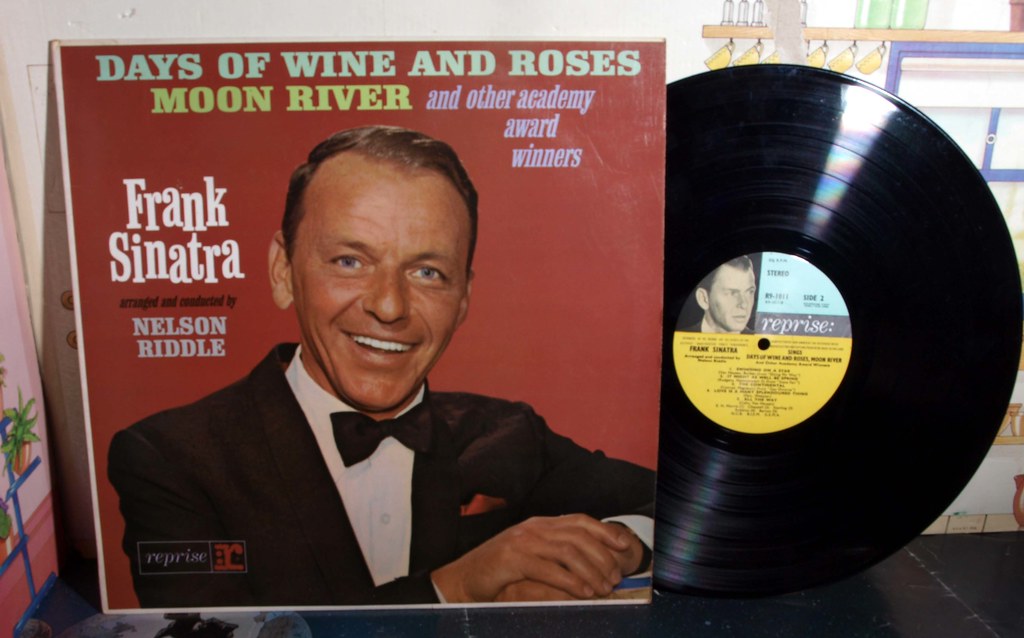 When you don’t write your own material there is a question as to where do you find the material to record. Frank Sinatra spent decades flipping between ballads and swing and swing and ballads and for album # 29, Days Of Wine And Roses, And Other Academy Award Winners, he went a little further afield, and decided to cover the coveted Oscar for best song category on the 1964 album.

Sinatra had already won an Oscar, though uncredited, for best song with his vocal on “Three Coins In The Fountain,” and he resurrected the hit song ten years later. The movie was an awful travelogue romance flick for Yanks who hadn’t returned to Europe since WW2, and the song, written by two big time players, Jules Styne and Sammy Cahn,  is as lousy as you’d expect, lousier even. That isn’t to say Frank’s easy going take isn’t good, it is swell, it just isn’t necessary. Neither is the Hoagy Carmichael-Johnny Mercer “In the Cool, Cool, Cool of the Evening,” from a 1951 movie “Here Comes The Groom,” “Days Of Wine And Roses” (no prizes for guessing where that one came from), and “The Continental”  a dance track which won the Oscar for Ginger Rogers in 1934. None of the material is ace, and except for “The Gay Divorcee,” neither were the movies. Those (mostly) 1950s were a winky winky love and romance soaper for women to drag their husbands to.

What’s left is, at least theoretically, of some interest. “The Way You Look Tonight” is a classic that Frank has sung many times before and does a completely credible take on without even nearly breaking a sweat (from an old, great, Fred Astaire and Ginger Rogers movie) is just a pleasure to hear. “Moon River”? Thank God we got to hear Frank sing it once. The Henry Mancini masterpiece received an acoustic, sweet and tempered take by Audrey Hepburn in “Breakfast At Tiffany” but it was bound to be covered gain and again. The lyric, by Johnny Mercer, returned Mercer (and Holly Golightly, come to think of it), back to childhood, remembering the Mark Twain-y  Savannah, Georgia. A song without an anchor, it drifts just as Holly does. Jerry Butler had an early hit with it in 1961, bur the drowzy, swoony Andy Williams version is probably the other one to remember. It isn’t a great fit for Sinatra, some of the album are mismatches as well, yet Sinatra has never glided more stealthfully through a song: the entire album finds Frank simply not pushing it, “Secret Love” -a Doris Day tailor made, is given a glow without given an intensity, on “Swinging On A Star” it is as though he is noting that da Bing owns it and he is just Odelay on it -passing through.

No song on the album, except for “Three Coins In A Fountain,” “The Way You Look Tonight” and “All The Way” (and the latter never won an Oscar, though Sinatra sang iit for the second time in 1952’s “Meet Danny Wilson”)  are Sinatraisms, and it shows, the dichotomy of Frank, between ease and unyielding passion, are not really happening. Nelson Riddle arrangements are fine and both Nelson and Frank are as calm as you can be with the songs, they just perform them and move on. And listening to it today, I am happy to have Frank covering Fred Astaire and Ginger Rogers, Henry Mancini,Johnny Mercer (and doubling up on all of them here),  Doris Day. They live as part of a deeper portrait of our greatest singer of all time. And Frank is completely comfortable, absolutely capable on every track. He might not add anything to anything, except for one thing: a different, slighter tone, on the myriad gifts that are Frank.