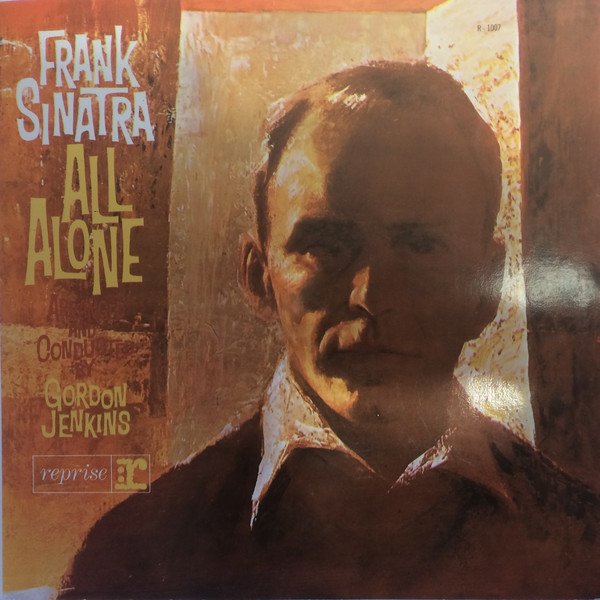 Wait? What? Eh? A Frank SInatra album doesn’t chart? In 1962? How is this possible? Frank SInatra’s 24th solo release, All Alone is a set of torch songs arranged and conducted over three days in January by Frank’s Reprise era go to guy Gordon Jenkins, and it is a doozy. Five of the songs are by one Irving Berlin, all of them are wonderful, sad, and Autumnal. And one of them is the sort of, hey, how didn’t they know they had this on their hands? baffling misjudgement in not releasing it as a single.

So, remember when Elvis Presley covered Bob Dylan’s “Tomorrow Is A Long Time” and shunted it off as a bonus track on Spinout in 1966? Well, what you might not know is that Frank Sinatra covered a song Elvis had a smash hit with in 1960, “Are You Lonesome Tonight,” on All Alone. The song is an oldie, it dates from 1926, but it is Presley’s song, he performed it live in concert ever after, and it is a crossover standard, written by  Lou Handman and Roy Turk, that included a spoken word bridge based on a line in Ruggero Leoncavallo’s Pagliacci… yes, so overblown that Presley would make fun of it on stage. Sinatra went Presley one better, and cut the bridge entirely, and the song works as well without it. You have to wonder why Sinatra didn’t think to sell the song as Frank sings Elvis. You wonder why he didn’t unite the teens and their parents in one fell swoop. It is a more than competent take, a stately, low key, strings and sobs, waltz that (unlike Presley’s take) would never have been even considered for the r&b charts.

In the end, much like All Alone itself, “Are You Lonesome Tonight” is a little lost in time. Everybody knows Only The Lonely, In The Wee Small, gangbuster swingathons Songs for Swingin’ Lovers!, even later albums like Strangers In The Night and the dreaded Duets I and II, but some albums just seemed to disappear and, really, exceedingly few Frank albums deserve that fate and All Alone didn’t.

Maybe it was the times, released in October 1962 at the height of Frank close friend POTUS Kennedy’s Camelot (and also the height of the Cuban Missile Crisis but that would be over by November), the album isn’t for happiness or for fear, it is for a deep seated, through to the bone, misery. And if Sinatra had released it just a  little more than a year later it would have perfectly fitted the mood of the country. But he didn’t and it didn’t.

Initially called Come Waltz with Me, based on a song written specifically for, but not on, the album after Sinatra changed his mind. It is a collection of waltz’s but not the Vienna dance you might imagine, the swing of the tempo is all undertow and the entire album (not much loved by Sinatra fans) is just plain sad. “”The Girl Next Door” out weeps Judy Garland’s version in “Meet Me In St. Louis,” “What’ll I Do,” “When I Lost You,” and “Oh, How I Miss You Tonight” are as relentlessly tear stained as anything Frank has done. And sure, it weakens in comparison to Nelson Riddle’s arrangements, and Frank doesn’t have the power of plaintive he had with Columbia, but nobody else has as much as Sinatra on Reprise. In song after song, Frank is an immaculate, soar to sadness (listen to the coda of “Oh, How I Miss You Tonight” -it goes up and up, like he is calling out to the woman, and then drops like a stone into the abyss. It is the definition of nihilism.

Going through Sinatra’s catalog album by album, so far I haven’t been taking by surprise as such, but All Alone has taken me by surprise. How didn’t I know this? How is Only The Lonely considered among his greatest achievements and All Alone is an unknown entity? It is all of a piece entirely, it is all about this one mood, swooning strongs, Sinatra’s subtle and gorgeous singing, and songs, good songs, of romantic loss taken at a waltz pace. And Elvis, of course. To quote the final number, the song is ended but the melody lingers on.