Frank Sinatra’s “A Man And His Music” Reviewed 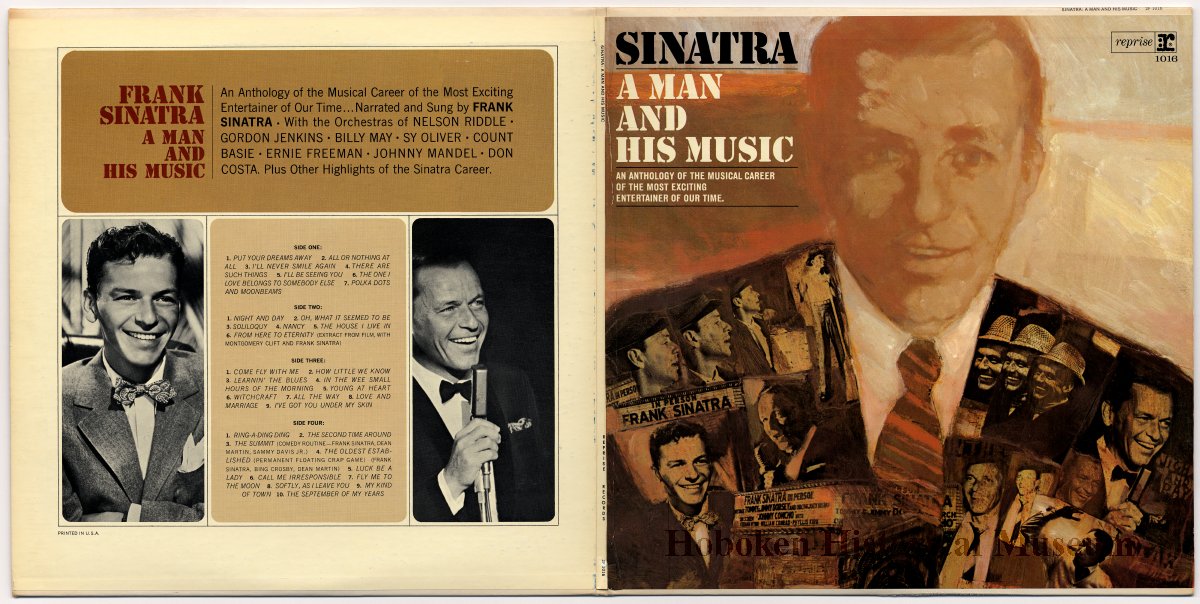 “What did I l learn from T-Bone Dorsey?  Well, Just about everything I know about phrasing and breath control. In fact I’m probably the only singer who took vocal lessons from a trombone. Old TD could blow that thing for a whole week on one sack of air and I latched on….” That was Frank Sinatra on the great bandleader Tommy Dorsey, who he sang for from 1939 – 1942 and recorded 40 songs in 1939 alone. And Frank said it before he sang “There Are Such Things” from his 1965 36th solo album, A Man And His Music. The 32 song album of re-recorded songs from the  catalog culled from his Reprise revivals and elsewhere, released to coincide with an NBC TV special and with his 50th birthday. The NBC Special was where Gay Talese was when he wrote “Frank Sinatra Has A Cold” for Esquire (here).

The special was one thing, the album another: there are a lot more songs on the album than there was on the special, where he recorded eighteen songs and kept fourteen for the show. The album was a version of Sinatra reacting to Beatlemania by saying (as was written in a press release at the time) “If you happen to be tired of kid singers wearing mops of hair thick enough to hide a crate of melons…it should be refreshing, to consider the entertainment value of a video special titled Sinatra—A Man and His Music….”

Sinatra was feeling his age, feeling the competition, and responded with more than a reminder as to why Frank was the greatest singer of his generation.  A Man And His Music won the 1967 grammy Album Of The Year and though, no, it didn’t deserve it, if somebody is gonna win an award they don’t deserve, at least he deserved to win an award he didn’t deserve.

From Harry James in 1935 to the autumnly September Of My Years (here), from the earliest of hits, “All Or Nothing At All” to the death of his friend President Kennedy “The House Of Love” (incidentally, Sam Cooke has a great version). Included the spoken word excerpt from his Oscar winning “From Here To Eternity” and the “Soliloquy” from Rodgers And Hammerstein’s “Carousel” and his shining “Guys And Dolls” moment “The Oldest Established (Permanent Floating Crap Game In New York) ” taken directly from “Robin And The 7 Hoods,” to The Rat Pack goofing around, the 32 songs go through 25 years, though the quarter of a century seems awful arbitrary -yes “All Or Nothing At All” was 1940, but he had been around awhile.  A Man And His Music has an antecedent in Satchmo: A Musical Autobiography, Louis Armstrong’s re-recording of some of his greatest early trumpet solos, and it has a similar problem: the spoken word intros disrupt the flow.  The NBC Special isn’t like that, while Sinatra had a bad cold and the two evenings of taped live performances had one entire night curtailed and Sinatra on a rampage, the second night was perfection and his performance in front of a 32 piece orchestra, conducted by two great arrangers in Nelson Riddle and Gordon Jenkins. What we got was 51 minutes of prime Frank, including an “I’ve Got You Under The Skin” that stands as a top version, decked in a sports jacket, woollen waistcoat and brown shoes (he changes clothes another two times before the show is over) he is beyond cool elegance and yet he sings it with a tenderness and a swing that is just about perfect. Speaking of perfection, on the album a terrific “Soliloquy” where he moves effortless and yet acting strong through the thought process that destroys the character is a complete standout.

All the songs on A Man And His Music are compiled from the 1960s Reprise remakes, including “Love And Marriage” recorded specifically for this album. At the age of fifty, Frank’s voice should be a little rough and it isn’t. The one time I saw him, his final Radio City Music Hall stand in 1994, his voice was shot but his phrasing remained immaculate. In 1965 everything was still in working order. But there is no getting round the inferiority of these versions to the originals. Around the halfway mark, Sinatra follows a  re-recording of “In The Wee Small Hours Of The Morning” with a re-recording of “Young At Heart” – “Wee Small” doesn’t make it, “Young At Heart” does… even with an artist of Frank’s calibre you can’t really mess with genius.

Between the versions and the interloper narration, A Man And His Music doesn’t function as an album or as a greatest hits, it tells the story but keeps on derailing you. In hindsight, I am happy to have heard it for its historic perspective on his career. But as an album fan, it doesn’t quite make it.