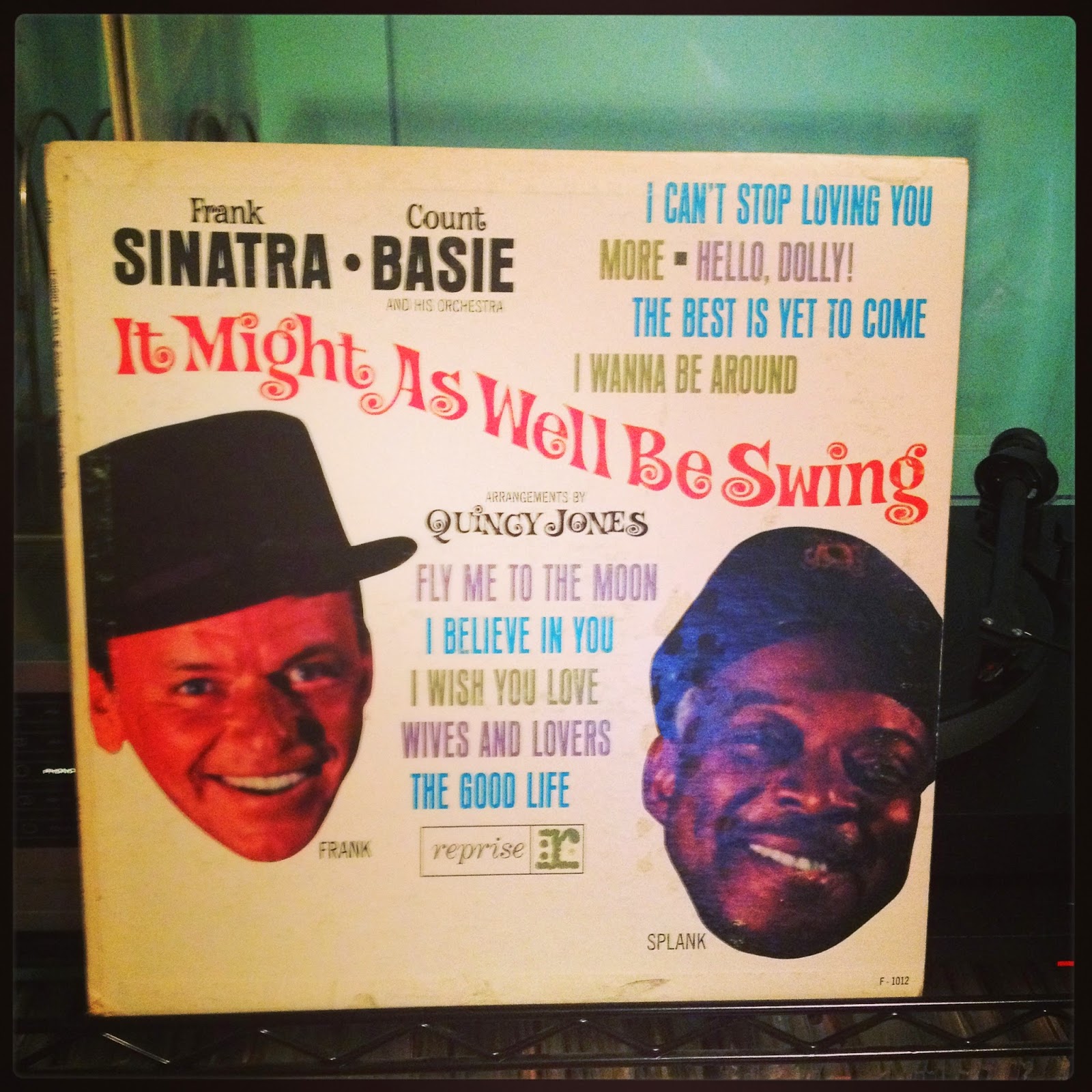 “Blow your horn Louie, sing up a great big storm Louie…” That’s Frank Sinatra, paying tribute to Armstrong’s # 1 smash hit version of “Hello Dolly” on the Count Basie and Sinatra album  1964’s It Might As Well Be Swing.  Arranged and Conducted by Quincy Jones, with jazzmaster Sonny Burke. Perhaps a touch better than the first Basie-Frankie collaboration, 1962’s An Historic Musical First (my review here), I think we can all agree on the difference: the straight into the canon arrives “The Best Is Yet To Come”, pushing the album just that touch ahead. The 31st release takes the bad taste of America, I Hear You SIng (here) and swings it out of your memory files. It works as a bookend to “That’s Life” and also as an embrace of the post-Kennedy years, a song of such resolute and glorious optimism and swing it is an immaculate conception that Sinatra performed for the final time in February 1995, his last live show.

“The Best Is Yet To Come” is the true exceptionalism of the American century, from Count Basie’s tinkling piano intro and Frank’s calm and just ever so slight swagger, singing between the orchestra (not over) and especially the brass section, he builds his case with a charm and cool swinginess that for a just about final time, puts rock and roll back in its place. He doesn’t hector the girl he is inviting into a romantic dreamworld, rather Frank is so confident he can play it as smooth as imaginable and leaves the horns to pull her towards him. “Wait till these arms are ripe for you to surround” is a come on, but it is the brass that swings the case and closes it tight shut. As for the song itself, it is all forward looking, all into the nearly arrived best of.

It isn’t the only song that joined the canon, not as major but “The Good Life” is a show stopping song with an all brass instrumental break. So where is Count Basie, the pianist? Basie was always more of a band leader than a lead pianist. He was no Duke Ellington, he didn’t write music, he wasn’t given to soloing, he performed from the middle for 50 years as the Count Basie Band.

Though it is a little hard to see it as such, in some ways Swing is a continuation of concepts explored on Sing, the songs were all very contemporary, they were making sense of the end of the American Songbook decades, denying what was right in front of them, eight years after Elvis Presley arrived, and just as the Beatles were arriving to flood teen America with the modern world. Sinatra actually did respond, both to his friend Kennedy’s assassination, and to the Hillbilly meets the blues (that Owen Bradley would morph towards Sinatra with Patsy Cline), even with a cover of Don Gibson’s “I Can’t Stop Loving You” given a refined swing: it makes you wish Frank and Owen had recorded an album together.

The heart of the matter is Neo-classics like “More,” “Fly Me To The Moon,” “The Good Life,” “”Fly Me To Moon (In Other Words),” and “Hello Dolly” -as well as, also, almost up there the brutal “I Wanna Be Around” (the song is minor Johnny Mercer, the sentiment isn’t right ). But everything works more than well enough, the matrimony advised “Wives And Lovers” swings beautifully, though well beyond dated, “I Wish You Love” shouldn’t be swing, it should be big band ballad, and “I Believe In You” has the best tempo stride on the album.

Song for song, moment for moment,  It Might As Well Be Swing is a terrific achievement: it is as though Basie and Sinatra were a bulwark against encroaching blues, with songs written no later than 1959, they proved swing still swings.