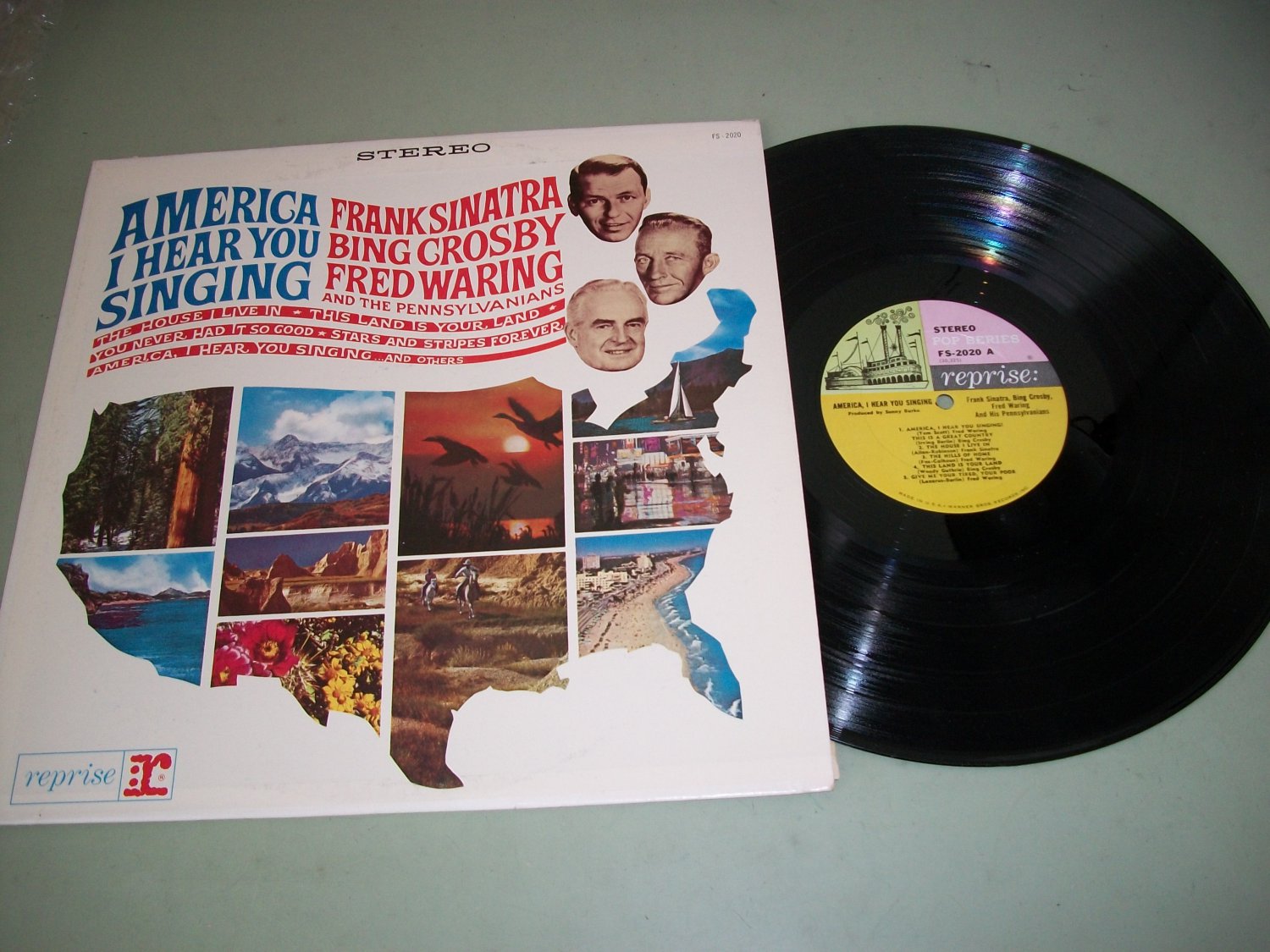 “What is America to me?” Frank Sinatra inquires on his 30th album, with co-signed and co-star of “High Society” Bing Crosby, some nine years after the wondrous and glowing musical. The answer is, unfortunately, America to him is a place where friend and fellow Catholic John Kennedy could be assassinated and the best they could do to honor him is string up a nobody and kill him off before anybody got to question the loser . America, I Hear You Singing , recorded two months later, and released six moths after the end of Camelot, is fakery by  Frank Sinatra and Bing Crosby, Between the two of them, the heart and soul of pop from the 30s to the late 50s, is a series of terrible patriotic songs arranged by the definition of meh Fred Waring.

If we don’t impart cynicism to Frank Sinatra’s tribute to his fallen friend on  America, I Hear You Singing, can we at least impart a complete lack of innocence on these hackneyed tributes to freedom and the North American experience. It isn’t  enough to say the songs here haven’t aged well, that “That This Is A Great Country” dissuades what it claims, that Bing and Frank, who sang together so magnificently on the always brutal wit of Cole Porter on “Well Did You Evah?”, could be so immensely forgettable. That song is  worth the entire load of patriotic hokum here combined.

With the possible exception of Duets I and II, Sinatra has never approached the nadir he reaches here. It begins at the bottom, the fanfare of the title track, and goes down like a lead balloon ever after. It subsumes into its essence  everything wrong with movie soundtracks of the 1950s and explodes them in tuneless non-sequiturs like “take a look in your history books and you’ll know what it is  to be proud”. We call that lying for effect. I consider myself very patriotic and that does not include cheerleading the country at every step, if the US was acting great they would have never allowed Lee Harvey Oswald to be killed before he could testify. He looks like a lamb to the slaughter in those old films. Sure, he’s guilty, as guilty as Jeffrey Epstein was suicidal.

How far up does Epstein go? Clinton -absolutely. Trump -probably… Kennedy? CIA is my bet… FBI in league with the Mafia? Freedom is just another word for cover up and it is abhorrent for Sinatra and Bing, and the regrettable Fred Waring, to believe it was the time to lie some more about the country.

But I would forgive all free entirely, if there was anything at all of the slightest musical skill. Worst moments? So many, all of them, but any time Fred and his Pennsylvanians take over completely. “Give Me Your Tired, Your Poor”. Wait, “You’re A Lucky Fellow, Mr. Smith” -a horrendous rewrite of “Mr. Smith Goes To Washington”.

Actually, it may be worst than Duets.